Austrian minister declares: ‘Our goal must be a ceasefire, not an escalation’ 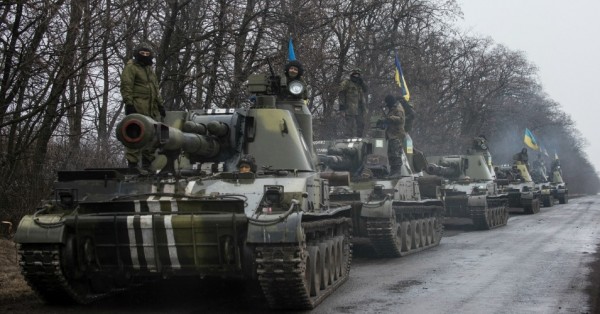 Even as some U.S. and European officials urged the Obama administration not to provide weaponry and further military assistance to Ukraine—among the options being weighed by the White House—the second-highest ranking U.S. diplomat warned on Friday that pressure to arm Kiev-backed government forces would increase if aggression from pro-Russian separatists persisted.

Deputy Secretary of State Antony Blinken told German radio (DLF) the United States was already working on supplying Kiev with non-lethal equipment, including $130 million worth of protective vests, night-vision goggles and other equipment.

“But if the aggression continues, I think there will be more and more pressure to give them other means to protect themselves,” he said in the interview with DLF.

Indeed, House Speaker John Boehner and a group of top Democrats and Republicans on Thursday “stepped up the pressure” on President Barack Obama to send arms to Ukraine, saying in a letter that the so-called Minsk 2 agreement, which led to last month’s cease-fire, have only consolidated Russian and separatists’ gains, the Associated Press reports.

“Instead of escalating the war and fueling nationalist extremism, western powers should be using their leverage to wind it down. If they don’t, the consequences could be disastrous—far beyond Ukraine.”—Seumas Milne, The Guardian

“We urge you to quickly approve additional efforts to support Ukraine’s efforts to defend its sovereign territory, including through the transfer of lethal defense weapons systems to the Ukrainian military,” the letter read in part.

However, ahead of a meeting of foreign ministers in the Latvian capital of Riga on Friday, E.U. foreign policy chief Federica Mogheri insisted that the implementation of the peace deal brokered in Minsk last month “is the way to go forward.”

Other officials, including German Chancellor Angela Merkel and Austrian Foreign Minister Sebastian Kurz were also adamant in their opposition to sending further munitions.

“Our goal must be a ceasefire, not an escalation,” Kurz reportedly said, adding that arms deliveries “would only stoke the fire.”

But The Hill notes that Defense Secretary Ashton Carter said last month he was “inclined” toward providing Ukraine with lethal weapons, and that Chairman of the Joint Chiefs of Staff Gen. Martin Dempsey said Tuesday he would “absolutely consider providing lethal aid.”

Such assertions fly in the face of those claiming there is “no military solution” to the Russia-Ukraine conflict, whose ranks include Guardian columnist and associate editor Seumas Milne.

“In the west, Ukraine—along with ISIS—is being used to revive the doctrines of liberal interventionism and even neo-conservatism, discredited on the killing fields of Iraq and Afghanistan,” Milne wrote on Wednesday. “So far, Angela Merkel and François Hollande have resisted American pressure to arm Kiev. But when the latest Minsk ceasefire breaks down, as it surely will, there is a real risk that Ukraine’s proxy conflict could turn into full-scale international war.”

He continued: “The alternative is a negotiated settlement which guarantees Ukraine’s neutrality, pluralism and regional autonomy. It may well be too late for that. But there is certainly no military solution. Instead of escalating the war and fueling nationalist extremism, western powers should be using their leverage to wind it down. If they don’t, the consequences could be disastrous—far beyond Ukraine.”

Afghanistan: Misogynistic Hell Hole Made in the U.S.A.