Home ABOMINATIONS The Enemy is Not Russia or Putin

The Enemy is Not Russia or Putin 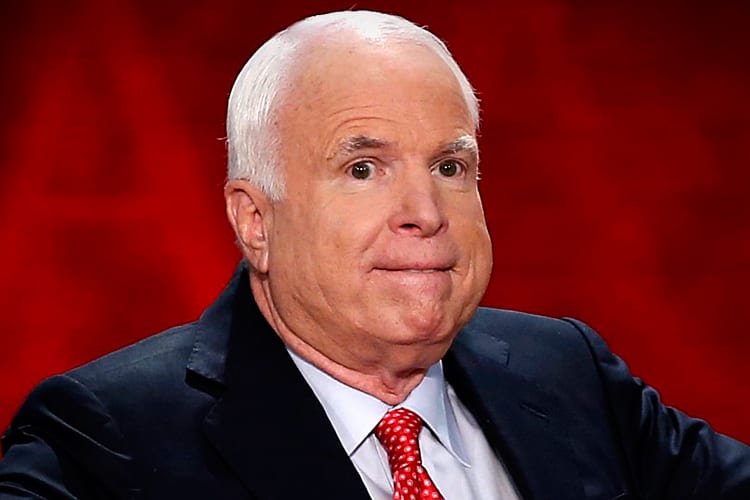 by JOHN WIGHT
[dropcap]I[/dropcap]t has been just over a year of growing and escalating crisis in Europe since the Maidan Square protests in Kiev succeeded in toppling Ukrainian president Viktor Yanukovych in February 2014.

Those protests, which people in eastern Ukraine consider to have been the basis of a coup that brought down their government and thus trampled over their rights, were openly and materially supported by the West. It saw the likes of US Senator John McCain – a man whose quest for a new Vietnam War never ends – travelling to the country to personally urge on the demonstrators in Kiev alongside Britain’s Catherine Ashton, representing the EU.

With this in mind, just imagine the reaction if Russian politicians had travelled to Mexico to urge on an anti-US protest movement to topple the elected government there and replace it with a pro-Russian alternative. And imagine too that at the head of this movement to topple said government were avowed neo-Nazis and fascists. Imagine what the reaction of the United States would have been then.

Then we have the open admission by the US State Department’s Victoria Nuland, another visitor to Maidan Square during the protests, that the US had ‘invested’ $5billion dollars to help secure Ukraine’s ‘democratic future’ since 1991, combined with the staggering contents of a taped telephone conversation she conducted in early February 2014 with the US ambassador to Ukraine, Geoffrey Pyatt, during which they discuss whom they would like to see ‘appointed’ the new Ukrainian president, anticipating Yanukovych’s imminent demise.

Is there anybody who seriously believes, given the aforementioned, that the US and its European allies were not engaged in a nefarious attempt to destabilize and undermine an elected government?

Ukraine’s history is inextricably linked to Russia’s. In the east of the country especially, cultural, ethnic, economic, and historical links with Russia are deeply entrenched. It describes a fissure between east and west in which one half of Ukraine favors close and fraternal ties to Russia on the basis of those links, while in western Ukraine the dominant political current is anti-Russian and pro-West.

Professor of Russian and European Politics, Richard Sakwa, explores the two competing models of statehood that have arisen on the basis of this fissure in his recent book, Frontline Ukraine (IB Taurus 2015). He describes the first of these as monist nationalism, involving the assertion of an ethnocentric identity that underpins a regeneration of the nation’s culture and social values along rigid and exclusionary nationalist lines. The second he refers to as a pluralist model, denoting an inclusive Ukrainian identity that embraces the disparate and diverse peoples and ethnic groups who make up the country, a consequence of its “long history of fragmented statehood.”

These two contested models of statehood are being played out in the current Ukrainian conflict, which has been ramped up by the geopolitical stakes involved as Washington and its allies seeks to ‘contain’ Russia in a struggle over the continuation of the unipolarity enjoyed by the West since the collapse of the Soviet Union in 1991, or the multipolar alternative which Russia’s re-emergence as a global power demands.

With over 5000 people killed and over a million displaced in the ensuing conflict in eastern Ukraine, the need for a political solution is self evident. Yet, judging by the intensity of the demonization of Vladimir Putin and Russia by the British political and media establishment recently, it is clear that an intensification of the conflict is the preferred option of those who refuse to accept that the British Empire no longer exists.

When he’s not being compared to Hitler, a particularly offensive caricature for historical reasons, the Russian leader is being accused of harboring ambitions of forging a ‘Russian Empire’. Britain’s Defence Secretary Michael Fallon recently went so far as to make the ludicrous assertion that Putin constitutes as great a threat to Europe as Islamic State, further evidence of a political class that has suffered intellectual collapse.

That such accusations stem from a nation whose government has played a key part in reducing Afghanistan, Iraq, and Libya to a state of chaos in recent years, only makes them all the more hypocritical if not downright noxious.

But then this should come as no surprise, as we’ve been here before, haven’t we? Remember when Venezuela’s Hugo Chavez was being similarly demonized and held up as a dictator? His crime when he came to power and remained there on the back of numerous democratic elections was his refusal to allow Venezuela’s wealth to continue to be shipped out of the country, as it had been for decades, by a small group of Western-supported oligarchs.

What the crisis and conflict in Ukraine has done is remind us that we live in a world in which the West’s interests and rights are the only ones deemed legitimate. This is what drives the repeated attempts by Washington and its allies, especially the UK, to push a hegemonic agenda. And whether in the Middle East or in Europe, it is this agenda that has been the root cause of instability and conflict that is unfolding in eastern Ukraine at present and which has pushed the Middle East into an abyss of carnage and barbarism.

The US is a global hegemon. With over 1,000 military bases covering the planet, 11 navy battle carrier groups, and a military budget exceeding that of every other major industrialized nation combined, the challenge facing the world is not how to contain Russia but rather how to contain Washington.

Vladimir Putin and Russia’s crime is to dare resist this US Empire, taking a stand against the hypocrisy, double standards, and complete lack of respect for other countries, cultures, and values it represents. The concerted attempt to expand NATO and an ever more militant EU all the way up to Russia’s border has nothing to do with democracy and everything to do with the projection of imperial power masquerading as democracy.

Successive British governments have made a virtue out of attaching itself to Washington’s coattails. Indeed it is no exaggeration to state that when Washington sneezes Britain is ready with a handkerchief to blow its nose. It is a sordid and eminently dishonorable relationship that has allowed the UK to parade itself as a first rate power when in truth it hardly qualifies as third rate.

An escalation of the conflict in eastern Ukraine benefits no one, least of all Russia. But the principle at stake is one that must be upheld – namely an end to the West dictating orders to the rest of the world and thereby spreading destabilization rather than stability, war instead of peace, and chaos at the expense of respect for international law. Only when the proponents of ‘democratism’, an ideology not to be confused with democracy, understand that the world is not theirs to control will there be an end to the never-ending spiral of conflict that shows no sign of abating anytime soon.

[box] John Wight is the author of a politically incorrect and irreverent Hollywood memoir – Dreams That Die – published by Zero Books. He’s also written five novels, which are available as Kindle eBooks. You can follow him on Twitter at @JohnWight1 [/box]