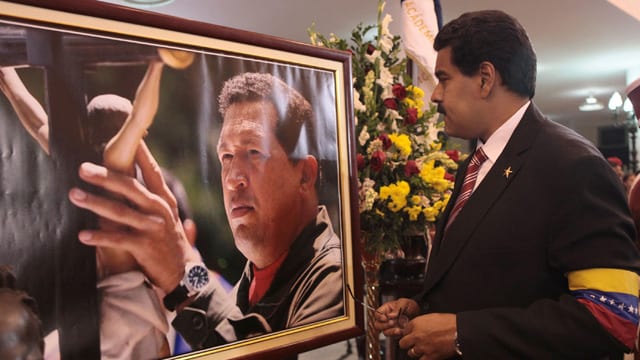 Pres. Maduro before portrait of late Pres Chavez. (Via flickr)

<span style="color: #0000ff;">President Barack Obama on Monday sharply escalated US threats against Venezuela, issuing an executive order formally declaring a “national emergency” to deal with what he termed “the unusual and extraordinary threat to the national security and foreign policy of the United States” posed by the Venezuelan government.

The order, on its face, turned reality inside out. Far from Venezuela posing a threat to the US, successive US governments have repeatedly intervened in Venezuela’s affairs, sponsoring coups, like the failed attempt to overthrow the late president Hugo Chavez in 2002, and funding and promoting a right-wing opposition that has organized violent campaigns aimed at destabilizing and bringing down the elected government.

This latest action, with its assertion of a “national emergency” and threat to “national security,” suggests that more direct intervention is under contemplation, including by military means.

Obama’s decree claimed that the supposed “threat” was the result of the Venezuelan government’s “erosion of human rights guarantees, persecution of political opponents, curtailment of press freedoms, use of violence and human rights violations and abuses in response to antigovernment protests, and arbitrary arrest and detention of antigovernment protesters, as well as the exacerbating presence of significant public corruption.”

He stressed that his actions served to “implement and expand upon” the “Venezuelan Defense of Human Rights and Civil Society Act,” passed by the US Congress and signed into law by Obama last December.

The hypocrisy of this measure is breathtaking. Needless to say, there are no “Defense of Human Rights and Civil Society Act” pertaining to any of Washington’s murderous and dictatorial allies, such as Egypt and Saudi Arabia. On the other hand, similar invocations of “human rights” have been used to justify military interventions and the toppling of governments from Libya to Ukraine.

The substance of the executive order—at least what has been made publicly available—is far less sweeping than either its title or motivation. It imposes sanctions on seven Venezuelan military, intelligence, police and prosecutorial officials whom it claims were involved in human rights violations. One senior administration official, speaking on a media conference call on condition of anonymity, even stressed that Obama’s order “does not sanction the Venezuelan government and also does not target the Venezuelan people.”

Among the most prominent to be targeted for sanctions is Maj. Gen. Justo Noguera Pietri, the former head of the country’s National Guard, who was appointed last year to head the Venezuelan Corporation of Guayana (CVG), the state-owned conglomerate that includes steel and aluminum plants and other industrial enterprises.

Also on the list is Katherine Nayarith Harrington Padron, a federal prosecutor who is handling the trials of members of Venezuela’s right-wing opposition accused of fomenting the violent protests last year that led to the deaths of at least 43 people, the majority of them members of the security forces or supporters of the government. Others include the heads of the country’s intelligence service and national police.

The penalties levied against the seven named officials are the freezing of any assets they may hold in the US and the revocation or denial of any visas admitting them to the US. It is by no means clear that any of them have such holdings or have obtained or applied for any visas.

State Department spokesman Jen Psaki asserted Tuesday that the Obama administration’s actions are not aimed at “promoting unrest in Venezuela…or undermining its government.” Instead, she said, the new sanctions were designed “to persuade the government to change their behavior.” 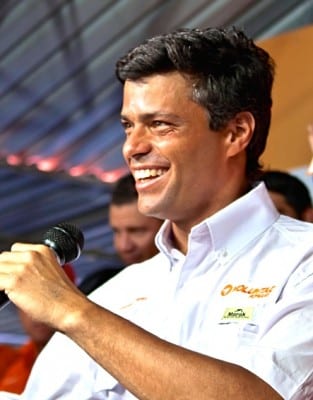 Leopoldo Lopez: Harvard educated, thoroughly “Americanized,” Lopez was a natural to serve as a Fifth Columnist supported by the NED and other tentacles of the empire, including the “human rights” chorus, and the utterly mendacious media.

The statement backing the new round of sanctions calls for the release of Venezuelan “political prisoners,” including what it said were “dozens of students.” The government in Caracas insists that all those being held for trial are charged with criminal acts of violence during the so-called salida or “exit” campaign waged by the US-backed Venezuelan right last year seeking the downfall of President Nicolas Maduro. US officials also named Leopoldo Lopez and mayors Daniel Ceballos and Antonio Ledezma.

Lopez has been jailed since February of last year on charges of incitement to riot, arson against a public building and other offenses. He is one of the principal Venezuelan recipients of funding through the US National Endowment for Democracy (NED), which has attempted to foster a rightist opposition to the government. Ceballos was the mayor of San Cristobal in Venezuela’s Tachira state on the Colombian border, where the violent anti-government protests began in February of last year. He defied a court order to instruct his police to quell the violence, instead providing political and material support to the anti-government mobs.

Antonio Ledezma, a veteran right-wing politician and Caracas mayor, has been charged with conspiracy in relation to an alleged plot in conjunction with Lorent Gómez Saleh, the leader of a far-right student group, which also received NED funding, to carry out terrorist bombings and other attacks. The government has made public videos in which Saleh boasted of his ties to the Colombian army and his plans to buy guns and explosives. He also named Ledezma as a key ally and supporter. Colombia was forced to extradite Saleh to face terrorism charges.

President Maduro has responded to the threat from the US with a turn toward a further militarization of his government and a bid to secure increased dictatorial powers. In a speech Monday night, the Venezuelan president denounced Obama for moving to “personally carry out the task of overthrowing my government and intervening in Venezuela to control it.”

In addition to naming Gen. Gustavo Gonzalez Lopez, one of the officials sanctioned by Washington, as minister of interior, Maduro selected a navy admiral to take over the secretariat of the presidency. Military officers, either active or retired, had already held at least one quarter of Maduro’s cabinet seats along with 11 out of the 32 governorships and directorships of key agencies and enterprises.

Maduro also used his speech to call for passage of an “enabling law” that would allow him to rule by decree without seeking legislation through parliament. He said that such powers were needed to counter “imperialist aggression” and defend Venezuela’s national sovereignty.

In reality, the Maduro government has repeatedly sought accommodation with US imperialism, with the president himself promoting the illusion that Obama is merely the victim of bad advisers. In a recent speech, he appealed directly to the US president, declaring, “I regret that in a year in which I made public appeals to you, I sent you a letter, I sent you emissaries, you have in an arrogant way refused to speak to me. I’m as much a president as you are.”

Meanwhile, Maduro’s so-called “Bolivarian Socialist” government continues to provide uninterrupted oil supplies to the US, while concluding lucrative contracts with US-based energy firms such as Chevron and Halliburton. The transnational banks enjoy some of the most profitable conditions in the world in Venezuela, even as the economic crisis imposes ever-harsher conditions on the working class, with roughly half the country’s households living in poverty.

Extraordinary powers in the hands of an increasingly militarized government will inevitably be turned against the Venezuelan working class and poor and utilized in defense of capitalist private property and the interests of the bourgeois layers that form the real social base of the Maduro government.

Venezuelan workers cannot accept a choice between the corrupt Maduro government and the military, on the one hand, and US imperialism and its right-wing Venezuelan political agents, on the other. They must forge their political independence in a struggle for genuine socialism as the only viable means of opposing imperialist aggression and capitalist oppression.

TASS: Suspect in Nemtsov case may have perjured himself.