Invest in Activism, Not Bernie Sanders 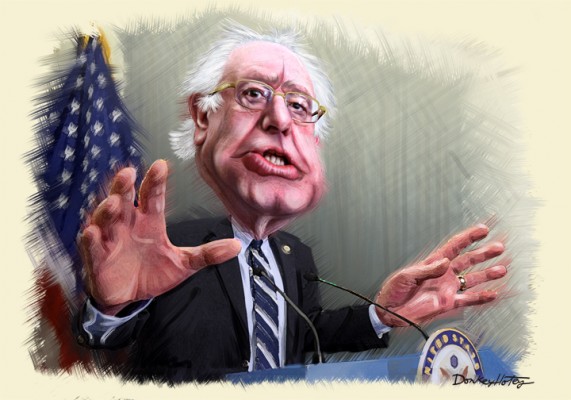 Yes, Bernie Sanders would be a far superior president to Hillary Clinton.

That requires a bit of elaboration. Something I just scraped off my shoe would be a far superior president to Hillary Clinton, but Sanders would actually be good in a whole lot of ways. He has numerous imperfections, but the contrast with Clinton is like day to night.

I’d rather have him running than not.

But please do not give him or Hillary or the wonderful Jill Stein or any other candidate a dime or a moment of your life. Instead, join the movement that’s in the streets of Baltimore opposing police murder, that’s in the halls of the United Nations pushing to abolish nukes, that’s blocking mountaintop removal, divesting from Israel, advancing renewable energy, and struggling to create fair elections through steps like automatic registration in Oregon, and pushing legislation to provide free media, match small donors, give each voter a tax credit to contribute, or take the power to establish plutocracy away from the Supreme Court.

[It’s useless to participate in presidential elections] At the presidential level we do not currently have elections. That office is not up for election; it is up for sale.

I’m not against elections. I think we should have one some day. At the presidential level we do not currently have elections. That office is not up for election; it is up for sale.

The point is not that we should abandon all hope or that when the going gets tough we should just give up. The point is that there is a huge opportunity here. Hillary Clinton expects to bring in billions (with a B) in bribery for her campaign (primary and general). To begin to compete with Hillary, Sanders would have to bring in a big chunk of that, at least some hundreds of millions of dollars.

For that kind of money we could create a television network dedicated to peace and justice and democracy from here on out. Or we could open a counter-recruiting office next-door to every military recruitment office in the United States. Or we could organize and bus people in for the largest and longest march on Washington against racism, militarism, extreme materialism, and the corruption of our elections ever seen, complete with food supplies and bail funds for as long as it takes. Instead of a march for nothing, how about an occupation for no more Bushes or Clintons or anyone like them?

The complete breakdown of the presidential election system is made obvious to some by the pairing of another Clinton against another Bush. Sanders muddies that clear picture, but only if you imagine he actually has a chance. On that basis, some will now propose to take a year away from policy-based principled activism, after which, the thinking will go, what’s another half a year for hold-your-nose lesserevilist Clinton campaigning? And, please understand, by entering the Democratic primaries, Sanders has committed to supporting the Democratic Party nominee and to encouraging his supporters to support her.

Activism gave women the right to vote. Activism got kids out of factories. Activism got the Navy out of Vieques. Activism won the last civil rights movement. Activism has always been the driving force for change. Two years of “registering voters” busy work out of every four years, and the reliance on corrupt figures that it creates, drains away our activism. It was activism that forced President Bush in 2008 to end the war on Iraq as of 2011 in a treaty signed by himself and Iraqi President Maliki. It was the antiwar uproar of the Bush years that led Congress members to think twice about voting for a new war in 2013 and has left them incapable of formally supporting the new war in Iraq that President Obama launched in 2014 despite the feelings of any number of people who believed that voting for him was somehow a significant act.

I worked as press secretary for Dennis Kucinich for president in 2004. I watched him make all the right points and win the most standing ovations in debates with the other Democrats. The reports the next day tended to mention him in the last paragraph as having also been there. And if you asked people in the room cheering for him they’d say “Yeah, I’d vote for him if he had a chance.” And inwardly, and sometimes outwardly, I’d rage at them: “Imagine the chance he’d have if all you morons weren’t bowing down to your televisions? Why show up and act as if you have an independent brain if you’re just going to do what your television told you to do?”

So, here I am in the role of “that jerk” telling Bernie Sanders fanatics that it’s hopeless — a self-fulfilling prophecy of doom if ever there was one. But we have limited time, energy, and money. I don’t think saving the planet is hopeless. I just think the best place to put our resources is into uncorrupted, principled, policy-driven, nonviolent, creative activism — including the activism needed to create fair, open, verifiable elections.

Sure, we now have the internet in a slightly larger way than a decade ago. Sure, a few more people are disgusted enough with Clinton without yet being disgusted with the whole broken system. Sanders is coming to speak in a very small church in my town next week and I’ll probably go listen. Any tiny influence the corporate media will allow him on the conversation, so much the better. Maybe with only two Democrats running they’ll be forced to allow him a few seconds here and there. Maybe he’ll point out that a corrupt corporate hack who voted for the war on Iraq was unacceptable last time and should be again. And yet, she’ll be accepted.

The price has been rising. The media has been worsening. Sanders will be skillfully marginalized and mocked. Hillary will avoid debating him. And the election will place either a Democratic or a Republican catastrophe in the White House. Not because I have some sort of wisdom due to having been around a few years. Not because I’m in a bad mood. But because the media monopolies that Clinton’s husband facilitated have demonstrably grown more powerful than ever, and elections have grown more corrupted by money — Just ask Hillary who pretends to oppose it.

Now anything is technically possible. But considering the scandals already known about Hillary Clinton, what sort of new one could make a difference? None that I can even imagine. She could suffer some unfortunate sudden illness or accident, but in that unlikely and undesirable scenario, the media would hand the election to the Republican, even blame Sanders for Clinton’s illness or death. You think I’m kidding? The Washington Post just suggested that a victim of Baltimore Police murder broke his own spine.

There’s no need for any hard feelings at all among those who mean well. You think the smartest strategy is raising funds for Bernie, we can still be the best of friends. I just happen to disagree. The real question is not whether the next President will be a walking disaster, but what sort of popular movement will have been developed to resist it.

[box] David Swanson is an author, activist, journalist, and radio host. He is director of WorldBeyondWar.org and campaign coordinator for RootsAction.org. Swanson’s books include War Is A Lie. He blogs at DavidSwanson.org and WarIsACrime.org. He hosts Talk Nation Radio. He is a 2015 Nobel Peace Prize Nominee.

This email may be unlawfully collected, held, and read by the NSA which violates our freedoms using the justification of immoral, illegal wars absurdly described as being somehow for freedom. [/box]

My attack from the left on Sanders, Taibbi, and Swanson