Animal Sacrifice: A Perversion of Hinduism

It’s unfortunate that in Hinduism the worship of goddesses is sometimes closely associated with bloody animal sacrifices such as the Gadhimai festival in Nepal. This goes against the central Hindu virtue of “ahimsa,” or harmlessness, and stems partly from a misunderstanding of Hindu theology, in which goddesses represent Shakti, the divine feminine principle. 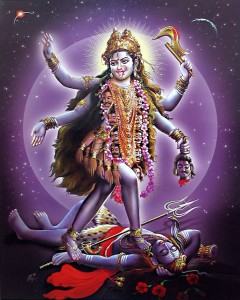 Kali, a violent manifestation of Shakti

As the active force which moves the universe, Shakti is often associated specifically with violent, destructive force, and so some practitioners believe that by indulging in violence and destruction themselves they are worshiping Shakti. This ignores the fact that Hindu spiritual practice is not about blind indulgence, but harnessing and disciplining one’s nature to achieve a higher state of consciousness. 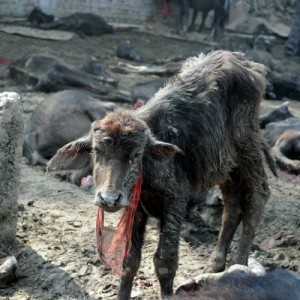 A lone calf, still standing amidst the carnage of Gadhimai

The proper use of violent force, and the dangers of giving it free reign, are both portrayed in the origin story of Kali, one of the most popular goddesses (and sadly, most often sacrificed to). She is said to have come to Earth in order to defeat a plague of demons, but because every drop of blood shed would invariably birth another demon, Kali was forced to drink it in order to prevail. However, she herself then became drunk on the blood, and went on a wild rampage which itself threatened to destroy all life on Earth, necessitating the self-sacrifice of her husband Shiva to quell her bloodlust and bring her to her senses again.

The moral message is clear: even if violence is occasionally necessary against extreme evil, we must always avoid indulging in bloodlust, or else we risk becoming as wicked as the enemy we would seek to defeat. Yet many self-identified Hindus have overlooked or ignored this lesson, and by needlessly slaughtering hundreds of thousands of innocent animals as a form of “worship,” participants in Gadhimai and other sacrifices more closely resemble demons than the goddesses who combat them.

(Featured image: Hindu saint Caitanya preaching to the animals, who dance with joy in his presence)

The Ukrainian Failed State: Pravy Sektor vs. The Kiev Junta

I have to wonder, how do Hindu proponents of animal sacrifice attempt to justify their actions? They seem so blatantly at odds with the core values of the religion.

Absolute Proof that EU Leaders Are Responsible for...

John Pilger: The US is Escalating...