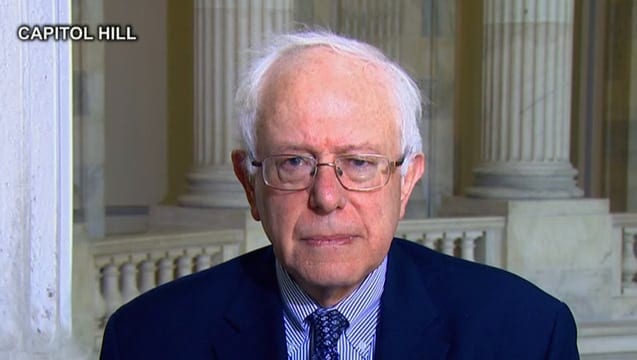 Sanders: Despite the rhetoric, hardly a man to be trusted beyond a single issue—inequality—and not even that.

The support by Bernie Sanders for the prosecution of NSA whistleblower Edward Snowden, which he voiced during Tuesday night’s Democratic presidential debate, is a damning exposure of the pro-imperialist politics of this self-described “socialist” politician.

Sanders attempted to distinguish himself from his fellow candidates only by calling for a “lenient” sentence for Snowden. “He did break the law, and I think there should be a penalty to that,” Sanders declared. “But I think what he did in educating us should be taken into consideration.”

In fact, the Vermont senator’s arguments were essentially similar to those of the other four candidates on the Las Vegas stage, all of whom sought, in one way or another, to distance themselves from the widely hated NSA programs while at the same time reaffirming their support for the military-intelligence apparatus.

Sanders’ call for leniency in the case of Snowden rings false, since once in the clutches of the American criminal “justice” system, he would face the full vengeance of the state machine. And there are clear warnings. Chelsea Manning was tortured while in military custody, and is currently serving over three decades of jail time for leaking diplomatic documents to the whistleblowing website WikiLeaks. The editor of WikiLeaks, Julian Assange, has been forced to seek asylum at the Ecuadorian embassy in London in order to avoid being extradited to the United States on espionage charges.

In the case of Snowden, given calls for his murder by officials within the state apparatus, there is no guarantee that once in custody he would even live to see a courtroom.

The argument that Snowden’s courageous stand is a crime deserving of punishment reveals far more about Sanders than his rhetorical denunciations of government spying. While calling for a lesser sentence for Snowden’s “crimes,” he has not called for the arrest and prosecution of the government officials responsible for actual crimes against the people of the United States and the world, through the dragnet surveillance program. These include above all Obama himself, whom Sanders is seeking to succeed as president. Nor did he offer any criticism on this score Tuesday of Hillary Clinton, who as Obama’s secretary of state for four years was directly involved in these and countless other crimes.

Sanders, like the entire political establishment, views the precedent set by Snowden, as well as the outpouring of mass support for him among the population, as extremely dangerous. This support reveals the depth of popular hostility to the Pentagon, CIA and NSA after a generation of unending war and repression. Such fears have only been further fueled by the revelations that have followed Snowden, including a large-scale leak this week of documents related to Obama’s drone war program.

At a Vermont town hall meeting in February 2014, Sanders said, “Look, you don’t want to have a situation where everybody who works for the government suddenly wakes up and says, ‘you know, I think I’ve gotta reveal this information despite any oath or agreement that I made.’ You’re gonna have chaos.” He continued, “He broke the law. I think that clearly…there should be an effort to enter into a plea agreement.”

Conscious of the danger presented by these social tensions to the American political establishment, expressed in near-record-low voter turnout and a deep disaffection with the entire political establishment, Sanders has intervened in the 2016 elections to corral the leftward shift in mass sentiments back into the safe channels of the Democratic Party. His oft-repeated call for a “political revolution,” although it is obviously directed to workers and youth looking for an alternative to the corporate-controlled political system, has been defined down by Sanders to a call for improved voter turnout in order to elect more Democrats to public office.

Nevertheless, he is appealing to broad layers of the population, particularly the youth, who consider Snowden to be a hero. This is what accounts for his more ambivalent rhetoric on government spying, calling for various “reforms” while making a less strident denunciation of Snowden than his fellow candidates.

In reality however, Sanders completely supports American imperialism’s twin policies of war abroad and repression at home. Indeed, on NBC’s “Meet the Press” last Sunday, Sanders issued bellicose threats against Russia, called for a major escalation of the war in Syria using Saudi ground troops (a stance he reiterated at Tuesday’s debate), and declared his support for the drone warfare of the Obama administration. When asked whether “counterterrorism” under a Sanders presidency would include “drone strikes and special forces,” Sanders replied, “Well, all of that and more.”

Much of Sanders’ appeal derives from his longstanding claim to be a “socialist.” But his support for the prosecution of Snowden, which ultimately reflects his support for American imperialism, is incompatible with the basic principles of socialism. For well over a century, genuine socialists have fought to develop an opposition to imperialism within the working class internationally, counseling workers that the “main enemy is at home.”

Socialists have sought to base this opposition on the scientific understanding that imperialist war abroad is inextricably bound up with the bourgeoisie’s class war at home, and that imperialism, as Lenin said, was reaction “all down the line.” Thus, the erection of the scaffolding of a police state in the United States, exposed most graphically by the courageous revelations made by Edward Snowden, is the necessary consequence of the drive by American capitalism for world domination.

It is impossible to oppose inequality within the United States, as Sanders claims to do, while supporting American aggression abroad. Indeed, it is highly significant in this regard that under the banner of the “War on Terror” the ruling elite have erected a surveillance infrastructure directed in the first instance against the American population.

Workers should take Sanders’ call for the prosecution of Edward Snowden as a warning. Sanders is opposed not only to the right of workers to know about the crimes committed by “their” government. Above all, he is determined to prevent a political break by the working class with the two-party system.

ABOUT THE AUTHOR
Tom Hall is a political analyst with wsws.org.