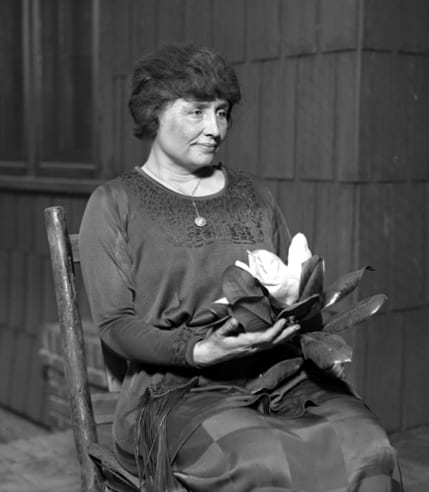 What would the great Hellen Keller, one of the ACLU founders, have to say about the current trends in the PC left? Heller, by the way, was a socialist, one of the best kept secrets by the mainstream media, which have always preferred to focus on her heroic struggle to overcome deafblindness instead of her advanced political beliefs. Same can be said about Einstein and other widely admired figures.

There are many on the far left*, who, I suspect, don’t want to govern. But for those of us who actually want to institute progressive change, who do not enjoy the hipster’s satisfaction of existing on the periphery, governing is the eventual goal. And yet, looking at the far left today, are we actually ready for such a thing? Frequently, I’m forced to conclude we aren’t. For instance, there are significant portions of us, who, despite our support for police and penal reform, are suspicious, if not avowedly hostile, to due process and freedom of speech. This might come as something of a shock for those of us aware the American Civil Liberties Union was founded by socialists and feminists. But it’s true.

What is actually going on in the cases mentioned by the author? An instance of immature, kneejerk leftism? The overgrowth of the politically correct posture?

Take what’s happening at Wesleyan University. After the school paper published conservative criticism of the Black Lives Matter movement, the student government voted to consider cutting the publication’s funding. In response, the paper has been forced to appeal for donations so as to retain its editorial independence. Similarly, when Northwestern University professor Laura Kipnis published an article criticizing “sexual paranoia” on college campuses, she was slapped with Title IX complaints. There are countless recent examples of left-wing students engaging in the no-platforming of potential speakers. Unfortunately, you can’t just chalk this up to youthful exuberance.

Socialist Worker is the publication of the International Socialist Organization, a group led by middle-aged people with children of their own. Prior to the summer of 2013, I was published on their website with some frequency. Every time I sent in an article or letter, it was generally posted. But after I mildly criticized the ISO’s slate-voting system in another outlet, their publication was suddenly closed to me. Over the past two years, I have probably sent the group an average of one letter or article a month. Nothing has shown up on their website.

[dropcap]A[/dropcap]s a rule, The Greanville Post tries to avoid all instances of witting or inadvertent use of political memes which harm the image of the left option. One such meme is to make all left (genuine, not just liberaloid notions) sound as “extreme”. In this context, the use of the term “far left” connotes precisely that. In reality, what the “far left” is in the American setting—or any setting for that matter—is simply the real left, the left that carries a Marxian, revolutionary, or authentic socialist principles, in which popular democracy is implicit.

While on the topic we should remind readers of another word also routinely used by the ideological guardians and apologists of the status quo to great effect, to scare ordinary people away from considering non-capitalist forms of governance and policy. That word is “radical”. The problem here is they use the word to signify “extremist”, which “radical” in its precise and correct meaning is not. An extremist can come in many colors and stripes, and is almost always a bad presence in political conclaves or formations, but a radical makes sense in terms of looking at the roots of an institutionalized problem.

Radicals—hence their label— look at the roots of social problems, or social diseases, which liberals and conservatives, hypocritically avoid. Anyone who is serious about a social problem or disease has to be a radical, for without uprooting the causes of a disease the symptoms will go on manifesting and re-erupting forever. That’s why all good modern physicians are radicals, by definition. When examining patients they look for the underlying, root cause of their condition, and then move to extirpate it. Are doctors, therefore to be feared as dangerous “extremists”?—PG[/box]

As mentioned previously, this hostility to “bourgeois” or “patriarchal” freedoms extends to due process. Here’s Zerlina Maxwell arguing in the Washington Post against the presumption of innocence, after Rolling Stone’s 2014 story regarding an alleged gang rape at the University of Virginia fell apart under scrutiny. “Many people (not least U-Va. administrators) will be tempted to see this as a reminder that officials, reporters and the general public should hear both sides of the story and collect all the evidence before coming to a conclusion in rape cases,” Maxwell said. “In important ways, this is wrong. We should believe, as a matter of default, what an accuser says.” Anyone active on the far left knows this was and remains a common sentiment.

These sorts of positions, it should go without saying, are incredibly dangerous. To my mind, they mark the far left as unready to actually govern. As socialist Fredrik deBoer points out, the devaluing of freedom of speech and due process will inevitably be used against those on the far left themselves, when political tides turn. But more importantly, freedom of speech and due process are values we should support for their own sake, strategic concerns aside. I wouldn’t trust anyone to govern who believed otherwise.

The author is a social activist residing in Connecticut. He can be reached at jonhoch3@gmail.com .