Home ABOMINATIONS Saudi Arabia and the “war on terror”

Saudi Arabia and the “war on terror”

The Saudi style of government fits right in with the norms of tyrannical absolutism prevalent in the 13th century…the royal family appoints all those who wield any real power.

Speaking to the media during a visit to the giant Incirlik Air Base in Turkey Tuesday, US Defense Secretary Ashton Carter praised the Saudi monarchy for proclaiming a new “Islamic [military] alliance” against terrorism.

“We are happy with the alliance formed by Saudi Arabia and looking forward for the steps being taken by them against terrorism,” Carter declared.

No sooner was the Saudi announcement made, however, than a number of countries raised questions about their inclusion, without their knowledge, in the so-called alliance. Three predominantly Muslim countries—Iraq, Syria and Iran—were excluded, leading to charges that the Saudi monarchy is really only patching together a Sunni Muslim alliance to prosecute its sectarian crusade against the region’s Shia population.

A more fundamental question is what does the Saudi regime mean by “terrorism”? Clearly, it is not referring to the various Al Qaeda-linked groups fighting in Syria, all of which get substantial funding as well as large numbers of fighters and their religious-ideological inspiration from the Wahhabist Saudi kingdom.

SIDEBAR
The announcement is so stunningly hypocritical that it has even caused derision in some quarters of the whoremedia, like the loyally imperialist Washington Post, where readers commented on a piece by Adam Taylor similarly disbelieving: 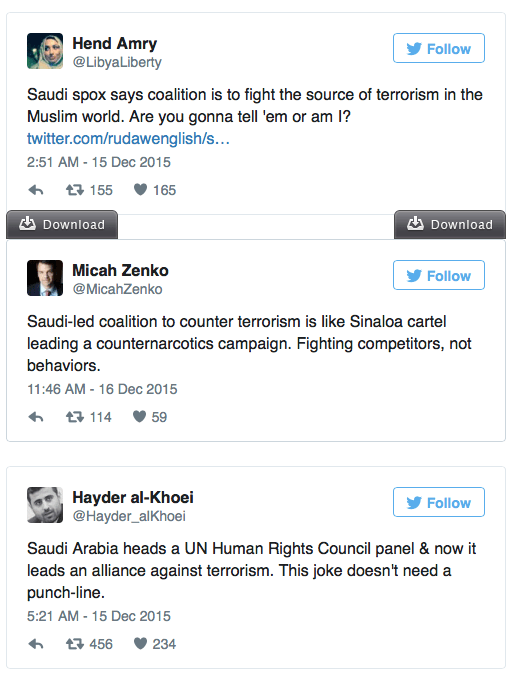 This fact was confirmed by then-US Secretary of State Hillary Clinton in a classified 2009 cable declaring that “donors in Saudi Arabia constitute the most significant source of funding to Sunni terrorist groups worldwide.”

This was further acknowledged by Vice President Joe Biden in a speech delivered at Harvard last year. He admitted that the Saudi regime, along with other US client despots in the Middle East, had “poured hundreds of millions of dollars and tens, thousands of tons of weapons into anyone who would fight against Assad. Except that the people who were being supplied were al-Nusra and Al Qaeda and the extremist elements of jihadis coming from other parts of the world.”

Of course what both Clinton and Biden sought to conceal was that this operation was fully coordinated by the CIA out of a station in southern Turkey. Washington had armed and funded similar groups in the US-NATO war for regime change in Libya, and well before that had worked closely with the Saudis in fomenting the Islamist war against the Soviet-backed regime in Afghanistan, which gave rise to Al Qaeda.

SSo what does the Saudi monarchy view as terrorism? The answer can be found in its prison cells, where three young men, all arrested when they were minors, are awaiting death by beheading for the “crime” of participating in peaceful protests against the relentless repression of the US-backed regime in Riyadh.

They are among 52 similar “terrorists” whose mass execution is expected at any time. Two of them—Ali Mohammed al-Nimr, who was 17 at the time of his arrest, and Abdullah al-Zaher, who was 15—in addition to being sentenced to die by decapitation with a sword, are to be crucified, their headless bodies mounted on crosses in a public space as an example to anyone thinking of defying the House of Saud.

What the Saudi monarchy considers “terrorism,” moreover, was codified into a new law last year. It establishes that terrorism includes “any act” intended to, among other things, “insult the reputation of the state,” “harm public order,” or “shake the security of society.”

“What does the Saudi monarchy view as terrorism? The answer can be found in its prison cells, where three young men, all arrested when they were minors, are awaiting death by beheading for the “crime” of participating in peaceful protests against the relentless repression of the US-backed regime in Riyadh…”

Other acts defined as “terrorism” include: “Calling for atheist thought in any form, or calling into question the fundamentals of the Islamic religion on which this country is based,” as well as “Contact or correspondence with any groups, currents [of thought], or individuals hostile to the kingdom.”

The parents of Abdullah al-Zaher, now 19, have come forward to plead for his life. They describe how he was tortured and beaten with iron rods after his arrest until he signed a false confession that he was not even allowed to read.

The Saudi regime has already executed at least 151 people this year, the highest per capita rate of capital punishment of any country in the world.

Within the Obama administration and the corporate media, appeals for the lives of Ali Mohammed al-Nimr, Abdullah al-Zaher and the dozens of others who face imminent beheading have fallen on deaf ears.

PROPAGANDA ALERT
Below a typical, profoundly manipulated “news” clip pretending to inform people (using an authoritative voice) where ISIS gets its money. The most obvious sources: the Saudis and the US, plus Qatar, are not even mentioned. So much for NBC News and their brand of journalism. The clip ran as part of a page reporting on the formation of the Saudi coalition. Every bit of “news” is similarly toxified by the spin doctors running the US propaganda machine. No wonder that people live immersed in confusion.

Washington continues to count Saudi Arabia as its closest ally in the Arab world, selling it more US weaponry than any other country on the planet. Last year alone, the oil kingdom purchased $1.2 billion in US armaments. A new $1 billion deal was recently announced, as the Pentagon continues to resupply the Saudi military in its vicious war in Yemen that has already claimed more than 7,000 lives, while reducing tens of millions to the brink of starvation.

The media in the US has largely ignored the plight of the youth sentenced to beheading and crucifixion. Instead, it has lavished praise on recent elections to municipal councils on the grounds that women were for the first time allowed to vote and run for office, though they remain deprived of virtually every other right.

Most of the coverage dutifully ignored the fact that less than 10 percent of the population—and barely 1 percent of Saudi women—bothered to vote for the municipal bodies, which are utterly powerless advisory panels in a country where the royal family appoints all those who wield any real power.

Nor in the media’s celebration of a handful of rich Saudi women running for meaningless posts was any attention paid to a Sri Lankan woman, one of the many thousands of foreign domestic workers treated like slaves, who is awaiting death by stoning after being charged with adultery. Two Indonesian maids were executed by beheading earlier this year.

That US imperialism counts the Saudi regime as its closest ally in the Arab world debunks all the pretexts it has used to justify its continuous wars in the region. The alliance with a state that finances, arms and provides religious-ideological inspiration to Al Qaeda-linked groups gives the lie to the supposed “war on terror,” just as US support for an absolute monarchy that beheads and crucifies youth exposes the fraud of Washington’s promotion of “democracy” and “human rights.”

Washington’s real objectives are purely predatory, directed at utilizing military might to offset the economic decline of American capitalism by asserting hegemony over the world’s markets and resources.

That it relies on the ultra-reactionary and bankrupt Saudi regime as a key pillar of this policy only demonstrates that US imperialism is headed for a catastrophe. It is destined to reap all that it has sown in the massive crimes carried out against the peoples of the region, even as the immense contradictions building up within US society create the conditions for a revolutionary explosion.

Bill Van Auken is a senior member of the editorial team at wsws.org, an information/analysis offshoot of the Social Equality Party.