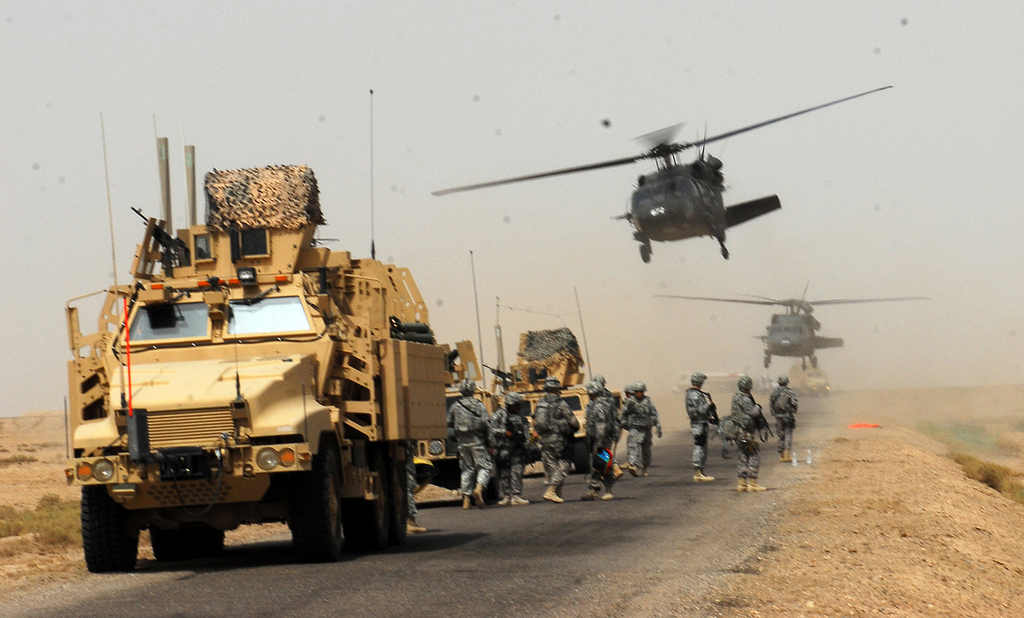 The year 2015 will be remembered as a year of expanding global warfare and militarism. It began with discussions of the possibility of “total war” against Russia over the Ukraine crisis, saw new provocations against China in the South China Sea, and draws to a close amid the escalation of the US and European war in Iraq and Syria and the spread of conflict to Yemen, Libya and other parts of Africa.

The imperialist powers are determined to make 2016 an even bloodier and more dangerous year. Germany and Japan are openly remilitarizing, as their governments seek to whitewash and rationalize the crimes of the World War II era. All of the imperialist powers have seized on the terror attacks in Paris and San Bernardino to place their populations and economies on a war footing.

The most dangerous factor is the US drive for global domination. The United States has its hands in virtually every country, employing drone assassinations, Special Forces operations and a network of military bases and agreements aimed at establishing unchallenged military domination over the planet, along with cyberspace and outer space.

More plans are afoot. Washington is preparing to expand its global basing system through the addition of a “larger network envisioned by the Pentagon,” which will include at least four new Special Forces hubs and numerous new “spoke” bases, according to a New York Times article published Monday.

The commando network will be centered on Eurasia and Africa but will be global in scope, according to Pentagon officials. Among the new bases will be a permanent establishment in Afghanistan, which will function as “a hub for Special Operations troops and intelligence operatives throughout Central and South Asia.”

The record of the US special units, which have emerged as the spearhead of the so-called “war on terror” since 2001, makes clear the murderous nature of the escalating commando war. US Special Forces have been granted a general license to carry out violence and mayhem in every part of the world with total disregard for international law. Thousands of US commandos are already operating in between 85 and 130 countries worldwide, according to varying estimates by US media sources.

The enlarged Special Forces network is only one element of a broader strategic escalation by Washington. US weapons manufacturers are collaborating with the government to channel an expanding war chest of arms to allied governments and proxy forces, with American weapons sales surging in recent years. In 2014, total US arms sales jumped by $10 billion to a total of $35 billion, giving US corporations control over 50 percent of the world weapons market, according to a congressional report released last week.

The intensified drive for a redivision affects every region of the world.

Washington is pre-positioning military equipment and deploying conventional forces and military “advisors” and trainers throughout Europe in preparation for war against Russia.

The US Army plans to double the number of tanks it has deployed to Europe, sending another full armored brigade to the continent, accompanied by infantry fighting vehicles and other heavy weapons as well as an additional full Army division dedicated to joint operations with NATO and European militaries.

In Ukraine, US Army forces are training five battalions of active-duty forces and US Special Forces are partnering with the Ukrainian military to develop Ukraine commando units.

South Korea, a country that has been tapped to serve as a staging area for US war preparations against China, was the leading importer of US arms in 2014, purchasing nearly $8 billion worth of American-made weaponry.

In December, the Obama administration approved the sale of $1.8 billion worth of weapons to Taiwan, including warships previously used by the US Navy and several advanced missile systems. The sale was the first weapons transfer to Taiwan in years and was clearly intended as a provocation against Beijing.

In the Pacific, the US Army’s “Pacific Pathways” program is coordinating joint operations with Asia-Pacific militaries. In the course of 2015, the program saw the US conduct joint drills with units from Australia, Indonesia, Japan, the Philippines, Malaysia, Mongolia, South Korea and Thailand.

The US has spearheaded a new imperialist carve-up of the entire region, with Britain, France and Germany piling into the wars in Iraq and Syria toward the end of 2015 and Saudi Arabia leading a US-backed war in Yemen.

Total arms sales to Africa—particularly in the oil-rich regions—increased by 50 percent between 2010 and 2014 over the previous five-year period. Cameroon and Nigeria, which are collaborating with the growing US intervention in West Africa in the name of the “fight against Boko Haram,” were among the leading importers of weapons. Preparations are underway to relaunch military operations in Libya, already devastated by the US-NATO war that overthrew and murdered Muammar Gaddafi in 2011.

Even cyberspace and outer space are not exempt from the US-led militarization drive. In November, the US was one of only four countries to vote against a United Nations resolution, “No First Placement of Weapons in Outer Space,” which was supported by more than 120 member states. In a presentation earlier this year, US Undersecretary of Defense Robert Work outlined Pentagon plans to deploy a range of space weapons, which Work claimed are necessary to ensure military dominance over Russia.

The experience of the Obama administration has underscored the impossibility of opposing imperialist war outside of a struggle against the capitalist system and all of its political representatives. Having won office in 2008 as an antiwar candidate, presenting himself as an opponent of the war in Iraq and an antidote to the militarism of the Bush administration, President Obama has presided over an escalation of the war in Afghanistan, wars for regime change in Libya and Syria, and a new war in Iraq.

Obama’s talk about ending the war in Afghanistan has been exposed by his decision to keep thousands of US troops in the country and the plans to establish permanent US bases there. All of his pledges of “no ground troops” or “boots on the ground” in Iraq and Syria have been exposed as lies.

The divisions that exist within the US ruling elite and the state over foreign and military policy concern the focus and methods of US efforts to dominate the territory and resources of the world, with the Obama White House arguing for a concentration on the struggle against China and his opponents demanding a larger commitment of troops and weapons to turn the Middle East into a de facto US colony. But there is no “peace faction” within the corporate and political establishment, or either of the two big-business parties.

One side of the global crisis is the slide toward a new world war. The other is the development of revolutionary struggles by the working class. Vast resources are allocated to destruction and war, while growing sections of the US population are pushed into poverty and forced to struggle for basic necessities such as housing, education, nutrition and health care.

Why the West Can Never Defeat or “Forgive” Russia

Imperialism and Liberation Strategies in the Middle East