Home AMERICAN EXCEPTIONALISM “The Martian” and the Renminbi.

“The Martian” and the Renminbi.

Matt Damon as the abandon but resourceful American hero.

“The Martian” is a very expensive piece of Hollywood trash, in short an international blockbuster.

But it has one revealing and interesting brief segment.  For those fortunate enough to have missed the movie, it recounts the survival and rescue of an American astronaut abandoned by accident on a mission to Mars.  It is an altogether predictable story of Yankee ingenuity and derring-do with nary a trace of the character development or the superb photography of its predecessor and inspiration, “Gravity. “

As the rescue operation proceeds the Americans find themselves short a rocket booster.  The obvious source for the needed spare would be Russia, but these are the days of compulsory Russia bashing and Putin hating.  To call on Russia would have sealed the fate of the pic as a disaster in the eyes of the critics and eliminated any chance for an Academy Award.

So in the script the Yanks at NASA respond to a surprise offer by the CNSA (China National Space Agency) for a booster, a top secret one at that.  Now that’s generosity!  It would have been possible to script a private rocket company as savior or perhaps even the Europeans or Indians or Japanese.  Why China? To boot, the Chinese are portrayed as compassionate and humane.  There is even a quick scene of thousands of Chinese gathered together in Beijing to cheer the effort.  The two Chinese in charge of the rocket loan are CNSA’s Chief Scientist, a confident, attractive and obviously powerful middle aged man, played by Hong Kong’s durable Eddy Koh, and his top deputy played by the stunningly beautiful singer-actress from the mainland, Chen Shu.  These two are the most elegant, handsome characters in the movie by far.

[dropcap]W[/dropcap]hy such kind treatment of the competitor most feared by the U.S. ruling elite? My suspicion was that it had something to do with the fact that China’s movie market is now the second largest in the world after the joint U.S.-Canada market and on its way to becoming number one.  Movie theaters are springing up all over the mainland with new viewers in the millions.  And with their ever rising standard of living, more Chinese can afford to go out to a movie rather than stay at home to watch a pirated DVD as in the past.  To market the movie successfully in China, a little kowtowing was in order.  Chinese are not likely to see a movie that portrays them as the Yellow Peril.  And in the end money talks, in this case the almighty renminbi. 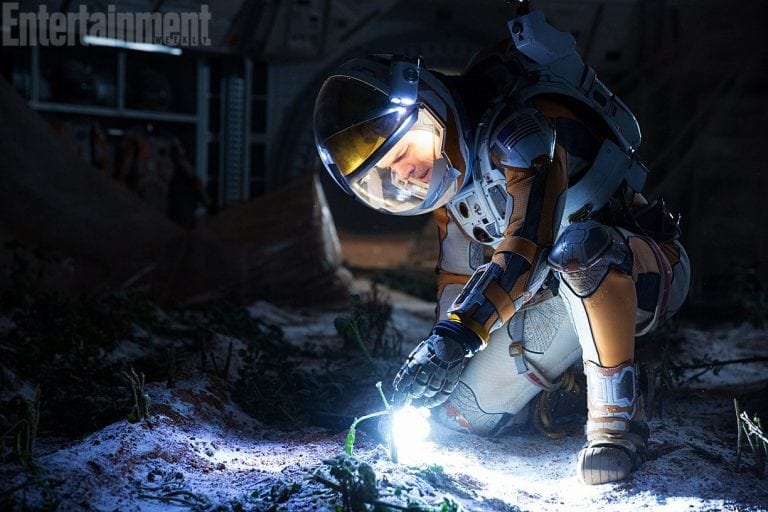 With this in mind I wrote to friends in Beijing.  And yes, “The Martian” is a great commercial success there. There are only two other movies in mainland theaters that have earned more revenue, and they are both Chinese.

“Now consider the limits that China’s burgeoning movie market puts on the demonization of China so necessary for Hillary’s (and Obama’s) Asian pivot.  How can you have a confrontation with people that millions here have seen portrayed so sympathetically?   What will Americans believe, the fiction of Hollywood or the fictions of their government..?”

The box office numbers are revealing for this behemoth produced at a cost of $108 million.  As of January 1, “The Martian” had grossed $225 million in North America, $100 million in China and $370 million in 88 other countries.   On opening night in North America it appeared in 3831 theaters and in China on 4848 screens.

[dropcap]N[/dropcap]ow consider the limits that China’s burgeoning movie market puts on the demonization of China so necessary for Hillary’s (and Obama’s) Asian pivot.  How can you have a confrontation with people that millions here have seen portrayed so sympathetically?   What will Americans believe, the fiction of Hollywood or the fictions of their government?  In fact the movie is almost an advertisement for the Chinese worldview of win-win relations among nations and major powers, as opposed to the confrontational, hegemonic view of the U.S.  That advert really puts a crimp in the pivot.

So there is a contest afoot here.  Will the architects of the pivot prevail or will Hollywood?   The same question comes up with all sorts of commercial interests.  “The Martian” provides just one illustration of it.  Can the neocons and the “humanitarian imperialists” huddled in Washington, in Thinktankland and in the editorial and “reportorial” offices of the “press” stand up to these commercial interests?  Let’s hope not.  Our survival may depend on it.

Despite the low quality of the movie, Hollywood has done its bit for peace, albeit motivated by a yen for the yuan.  In fact it is the best job since the superb antiwar allegory for the invasion of Iraq, “Avatar.”  So let us cheer for the movie’s message and not be too fussy about the motivations.  Or to quote Chairman Mao, “Good can come out of Bad.”

Postscript.  After writing the above I happened to come across this article from China Daily.  Here is a quote:

“Sci-fi thriller “The Martian” is the latest U.S. movie to win success in China, partly by including crowd-pleasing elements for locals.  Hollywood has been setting scenes in the Middle Kingdom since 2006 when Tom Cruise did a bungee jump from the Shanghai Bank of China Tower in “Mission Impossible III,” but the money making potential in the booming Chinese film market is encouraging Western filmmakers to portray China in a more and more flattering light.  Echoing the plot of the 2013 hit “Gravity,” “The Martian” sees the Chinese space agency play a key role in helping get Matt Damon home from Mars.”

The Chinese know quite well what Hollywood is up to.

John V. Walsh can be reached at John.Endwar@gmail.com

Reality Peeks Through in Ukraine

Will the US and Germany Turn Mongolia into...