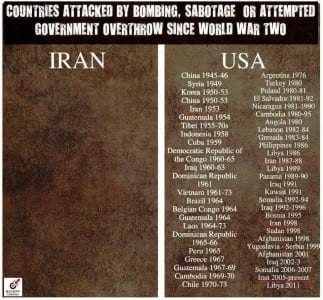 TThe Washington Post, a proud member of the main-stream media propaganda machine published an article by Jennifer Rubin titled ‘It’s time for a tough Iran policy’ where she declares that Iran might need “new sanctions” to curtail its growing influence in the Middle East. Senators Robert Menendez (D-N.J) and his partner in crime (literally) Mark Kirk (R-Ill) wrote a statement on the International Atomic Energy Agency’s (IAEA) recent report on Iran’s “possible military dimensions” of its nuclear program:

I don’t accept that the IAEA report competently or fully addresses the true nature of Iran’s past weapons of mass destruction program. The report was a whitewash. And it certainly doesn’t give us any more insight into Iran’s past activities or future intentions. The U.S. should not have agreed to shut the door on further investigating the possible military dimensions of Iran’s nuclear weapon programs based on a diluted, inconclusive investigation

Menendez is a friend of the American Israel Public Affairs Committee (AIPAC) who will do whatever the Israeli lobby wants him to do especially against Iran’s so-called “nuclear threat”. Menendez made it clear in 2013 Policy Conference sponsored by AIPAC:

Whatever challenges lay ahead, whatever new threats we face, whether in the form of rockets from Gaza, a nuclear threat from Iran, the spillover of violence from Syria, or the rise of Islamist extremists anywhere in the region, the strength of Israel’s democracy will remain a beacon of hope for good governance, economic progress, and the power of an enlightened society to foster democratic ideals

Menendez said that Israel is a “beacon of Hope” that will “foster democratic ideals” is absurd (just ask the Palestinians). Melendez and Kirk claimed that the report was a whitewash, but according to the IAEA’s (www.iaea.org) analysis:

The report was the IAEA’s final step under the Road-map for the clarification of past and present outstanding issues regarding Iran’s nuclear programme, concluded between the IAEA and Iran last July. The Road-map set out a process, under the November 2013 Framework for Cooperation between Iran and the IAEA, to enable the IAEA, with the cooperation of Iran, to make an assessment of issues relating to possible military dimensions to Iran’s nuclear programme by the end of 2015.

“As is the case with all my reports, the assessment is factual, technically sound and balanced,” Mr Amano said. “The methodology and information on which my assessments are based have been set out.”

Rubin also said that “speaking of Iran’s other violations, its missile test, also according to the United Nations, violated its Security Council resolution.” The Hill, an online Washington-based news source reported what U.S. officials thought about Iran’s missile test:

However, the launch would not be in violation of the landmark international agreement struck between the U.S., Iran and other world powers to limit Tehran’s nuclear ambitions, officials insisted. That agreement, formally known as the Joint Comprehensive Plan of Action (JCPOA), “is about one issue and one issue only: Iran’s nuclear program,” the official added

Rubin agrees with the Foreign Policy Initiative (FPI), a neoconservative think tank who wrote an article titled ‘Time to Get Tough on Tehran’ by Eliot A. Cohen, co-founder of the Project for a New American Century (PNAC), Ray Takeyh, senior fellow and Iranian national at the Council of Foreign Relations (CFR) and Eric Edelman, Director of the Foreign Policy Initiative (FPI), the same think tank where Victoria Nuland’s (architect of the Ukrainian quagmire) husband Robert Kagan who is on the board of directors at the FPI “are critics of the deal, explain that any effective Iran policy is incompatible with the JCPOA.” According to Rubin:

The authors suggest, “In addition to revising the nuclear agreement, the United States should punish Iran for its regional aggression, sponsorship of terrorism, or human rights abuses. To do so, it should segregate Iran from the global economy by restoring as much of the sanctions architecture as possible. . . . And it should launch a campaign of political warfare to intensify the Iranian public’s disenchantment with the regime and deepen dissension within the ruling circle.”

Rubin says that Cohen, Takeyh and Edelman do “emphasize the need to construct an anti-Iran coalition to roll back Iran’s moves toward regional domination.” Washington wants to dominate the Middle East as they do with the rest of the world. Iran has not invaded a sovereign nation for more than 200 years. They also suggest removing Syrian President Bashar al-Assad from power and set-up a no-fly zone and allowing Turkey back into the conflict. Cohen, Takeyh and Edelman also suggest rebuilding alliances with Sunni states and tribes with a small contingency of U.S. forces (advisors) on the ground. “Rather than pretend that Assad is our ally or that Russia is fighting the Islamic State, the next president will need to reassert U.S. leadership to combat Iran’s influence as it destroys the Islamic State” Rubin said. Washington’s support of the Islamic State to remove Assad is obvious and to say that Russia is not fighting terrorism is typical neo-conservative propaganda 101.

We know Russia’s success against the Islamic State has been problematic for Washington’s regime change operation against the Assad government since they are following the pentagon’s plan to take out “7 countries in 5 years” admitted by former Army General Wesley Clark. If Syria were to fall then Hezbollah and Iran would be next in line and that would lead to an all-out war in the region. But with Russia and Syria reclaiming cities and towns overrun by the Islamic State and other terror groups, it looks less likely to happen regardless what the lunatic neocons in Washington would like to see. The neocons would like to reapply the same foreign policy strategy that destabilized Iraq under the Bush administration and now they want the same for Syria and Iran. The neocons still have influence in Washington’s circle, so the question is; will the next president of the United States follow the neocon strategy in an attempt to “roll back” Iran’s influence in the Middle East? Will AIPAC, Menendez, Kirk and think tanks such as the FPI or the CFR influence the next president’s foreign policy decisions regarding Iran’s nuclear program? I expect tensions in the Middle East to escalate, leaving an open opportunity for neocon strategists to assist Washington in its crusade against Syria, Hezbollah and Iran which will fail because there is one major problem that stands in their way, and that is Russia.

Timothy Alexander Guzman is an independent researcher and writer with a focus on political, economic, media and historical spheres. He has been published in www.Globalresearch.ca, The Progressive Mind, European Union Examiner, News Beacon Ireland, www.whatreallyhappened.com, EIN News and a number of other alternative news sites. He is a graduate of Hunter College in New York City.

Nazi Germany is today, not MERELY in the...