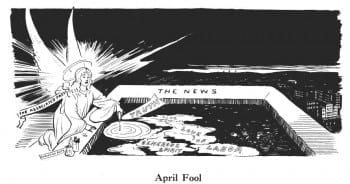 When Art Young, the early 20th Century satirist of America’s class wars wanted to portray how the country’s real owners cracked down on its enemies one of his drawings depicted the state’s bully boys dragging along a small, balding, helpless man holding some obviously suspect pamphlets while a bystander asks, “What’s he been doing?” and is answered by the arresting cops, “Overthrowin’ the guvment.”

Which could very well characterize Donna T. Haverty-Sacke’s formidable, well-researched and timely “Trotskyists on Trial: Free Speech and Political Repression Since The Age of FDR” about a long forgotten event in 1943, when the US government, relying on the Smith Act, which outlawed groups and individuals alleged to be promoting the overthrow of the government, jailed members of the miniscule Socialist Workers Party (SWP), a perfectly legal group that believed in Trotsky’s fantasy of a world proletarian revolution. The SWP, a small group of politically impotent sectarians, repeatedly torn worn by ideological and personal factionalism, had over the years included Sidney Hook, James T. Farrell, Max Schachtman, James Kutcher, Lyndon LaRouche, James Burnham, C.L.R. James, Farrell Dobbs, James Cannon, Bert Cochran and Irving Kristol. And today, at a time of never-ending wars and nightmarish alarms about terrorists attacking us in our streets and homes, this book appears when it’s most needed, asking how much freedom must be sacrificed in the sacred name of national security.

Donna Haverty-Stacke, Associate Professor of History at Hunter College, CUNY, who wrote the estimable “America’s Forgotten Holiday: May Day and Nationalism, 1867-1960,” reminds us how in 1942 the FDR administration rounded up 110,000 Japanese and herded them into remote desert camps. In 1944 the US tried but failed to convict native pro-Nazis plus even a few rightwing critics such as Lawrence Dennis and FDR’s first Vice-President John Nance Garner’s cousin Elmer. Critics were unwelcome. Ethan Michaeli’s fascinating new book, “The Defender,” recounts how Black newspapers opposing segregation in the WWII military were also warned about sedition by Francis Biddle, FDR’s Attorney General, who then threatened to “shut them all up.” Moreover, FDR gave J. Edgar Hoover a free hand to spy on his opponents, especially the radical SWP, which saw WWII as a clash between rival imperialists.

In 1919, Trotsky’s American followers were part of the American Communist Party but after he was expelled from Soviet Russia, they too were kicked out of the Party’s US branch. Reborn as the SWP in 1938, their main centers of influence were in John L. Lewis’ United Mine Workers Union and in New York City and especially Minneapolis, when it had become deeply involved in that city’s Truck Drivers’ Strike in 1934.

That walk-out began during the worst time of the Great Depression in anti-union, open-shop Minneapolis when the Trotskyist Local 574 of the Teamsters Union –a union divided between pro- and anti-SWPers—began to strike, In 1934, as Haverty-Stacke writes, “The Teamster’s strikes in Minneapolis were among the bloodier” among many in those years. 20,000-30,000 sympathizers joined the walk-out while the city, beholden to the potent pro-business, anti-union Citizens Alliance, responded by sending its police force and 2,000 “special deputies, two of whom were killed” to beat back the strikers. An effort to end the strike was finally struck but, unsatisfactory to many strikers and Local 574, the strike continued. Again, the powerful anti-union business community fought back. 0n July 20, 1934, “Bloody Friday” as it came to be called, 67 strikers were wounded and two were dead. “Though organized by just a handful of Trotskyists at the start,” writes Haverty-Stacke, “the 1934 strikes developed into a popular uprising of tens of thousands of supporters, in which the mighty Citizens Alliance was defeated and union recognition secured. For many observers, the 1934 Minneapolis strikes became a harbinger of what militant class struggle could achieve, precisely what the anti-unionists feared.

Nine years later the SWP was brought to trial. Government prosecutors used the Communist Manifesto and assorted SWP literature to demonstrate that, as Haverty-Stacke puts it, citing a prosecutor, “any material in the defendant’s possession that promoted revolution was integral to the conspiracy to advocate the overthrow of the government.” SWP member and novelist James T. Farrell, who later quit the party, argued instead that “freedom of speech is meaningless if it is freedom to agree with those to those who are in power.” Eighteen SWP Trotskyists were found guilty and imprisoned, a judgment applauded by most Americans including the American Communist Party. In 1949, the SWP continued fighting the verdict. Writing in The Militant, the party newspaper, Farrell Dobbs, one of the eighteen, called for a full pardon and reinstatement of their civil rights plus the end of the trial of eleven communists then undergoing the same kind of Smith Act prosecution in New York’s Foley Square, in effect a short-term fig leaf to the Communists. But ever faithful to Stalin—who had Trotsky assassinated in 1940—the gesture was promptly rejected by the Communists. Happily, in 1957, the Supreme Court in Yates v. United States ruled that speech, however critical of the government, was protected speech unless it crossed the line and posed a “clear and present danger.”

That should have ended Government harassment but it did not. For the next forty years the FBI continued spying on SWP. When Hoover’s notorious COINTELPRO was exposed in 1961, it revealed the extent of its hounding with informants, break-ins, thefts, wiretapping and bugging of phones. The Church Committee also exposed the FBI’s violations. In 1973,the SWP finally sued the FBI. The case, Haverty-Stacke, tells us, took “thirteen years, five decisions in district court, three major decisions in the court of appeals, five applications to the Supreme Court “ but eventually it compelled the ordinarily impenetrable FBI to open its files. Finally, in April 1968, federal Judge Thomas Griesa denounced the FBI’s misdeeds and ordered the U.S. to pay the SWP $264,000. “[Farrell] Dobbs who died in 1983,” comments Haverty-Stacke, “did not live to see this vindication, but he most likely would have been pleased and proud of his contribution in securing it.”

Haverty-Stacke then strikes a positive note by quoting Margaret Jayko’s judgment (in “The FBI on Trial” The Victory of the SWP Suit Against Government Spying”) that the SWP ruling was also a victory for all Americans because, “For the first time a federal court has ruled the very presence of government informers in a political organization is a violation of the constitutional right of free speech and association and the right to privacy.”

In a concluding chapter, she wonders how the country will be able to resist those who, since 9/11 and the US invasion of Iraq and the rise of radicalized Moslem groups, want to curb civil liberties in the name of safety. “What becomes of those liberties and of the dissent made possible by them when the nation exists in a constant state of emergency?”

Contributing Editor, Murray Polner wrote “No Victory Parades: The Return of the Vietnam Veteran“; “When Can I Come Home,” about draft evaders during the Vietnam era; co-authored with Jim O’Grady,  “Disarmed and Dangerous,” a dual biography of Dan and Phil Berrigan; and most recently, with Thomas Woods,Jr., ” We Who Dared to Say No to War.”  He is the senior book review editor for the History News Network.

The Compelling Memoirs of Ali Abumghasib