Home BANKING & FINANCE The Chart That Explains Everything

The Chart That Explains Everything

Why is the economy barely growing after seven years of zero rates and easy money? Why are wages and incomes sagging when stock and bond prices have gone through the roof? Why are stocks experiencing such extreme volatility when the Fed increased rates by a mere quarter of a percent? 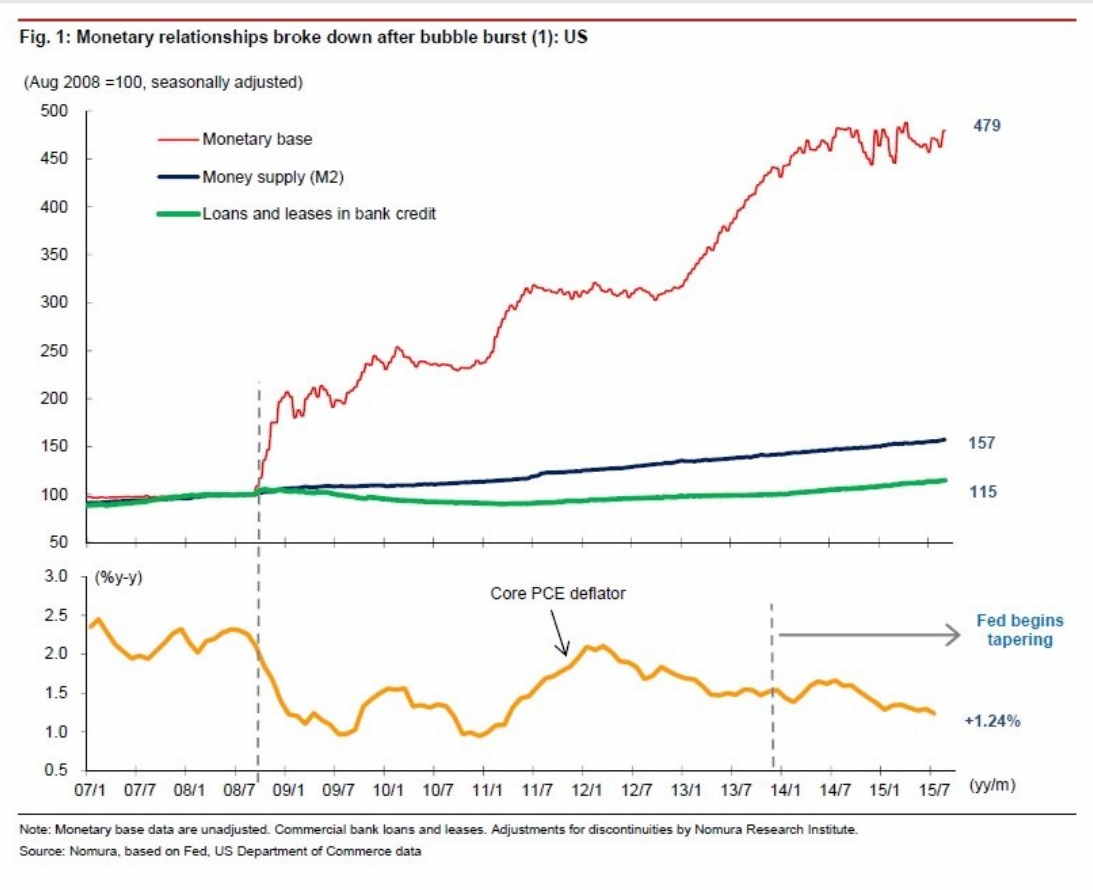 What the chart shows is that the vast increase in the monetary base didn’t impact lending or trigger the credit expansion the Fed had predicted. In other words, the Fed’s madcap pump-priming experiment (aka– QE) failed to stimulate growth or put the economy back on the path to recovery. For all practical purposes, the policy was a flop.

QE did, however, touch off an unprecedented 6-year bull market rally that pushed stocks into the stratosphere while the real economy continued to languish in a long-term slump. And the numbers are pretty impressive too. For example, the Dow Jones Industrial Average, which bottomed at 6,507 on March 9, 2009, soared to an eye-popping 18,312 points by May 19, 2015, an 11,805 point-surge in just five years. And the S&P did even better. From its March 9, 2009 bottom of 676 points, the index skyrocketed to a record-high 2,130 points on May 21, 2015, tripling its value at the fastest pace in history.

What the chart shows is that the Fed knew from 2010-on that stuffing the banks with excess reserves was neither lowering unemployment or revving up the economy. The liquidity was merely driving stocks higher.

It’s worth noting, that the Fed knows that credit does not flow into the economy without a transmission mechanism, that is, unless creditworthy borrowers are willing to to take out loans. Absent additional lending, the liquidity remains stuck in the financial system where it eventually creates asset bubbles. And that’s exactly what’s happened. Instead of trickling down into the economy where it would do some good, the Fed’s monetary stimulus has cleared the way for another catastrophic meltdown.

The chart suggests that the Fed’s primary objective was to reflate stock and bond prices to help the banks grow their way out of insolvency and avoid government takeover. Former Treasury Secretary Timothy Geithner alluded to this in an interview with CNBC in 2009 when he said: “We have a financial system that is run by private shareholders, managed by private institutions, and we’re going to do our best to preserve that system.” Unfortunately, the banking system was insolvent at that point in time, a fact that was confirmed in sworn testimony before the Financial Crisis Inquiry Commission by Fed chairman Ben Bernanke. Here’s what he said:

[spoiler]“As a scholar of the Great Depression, I honestly believe that September and October of 2008 was the worst financial crisis in global history, including the Great Depression. If you look at the firms that came under pressure in that period. . . only one . . . was not at serious risk of failure. So out of maybe the 13 of the most important financial institutions in the United States, 12 were at risk of failure within a period of a week or two.”[/spoiler]

Think about that for a minute. Not only was the US banking system hopelessly underwater, but also the world’s most lucrative and powerful industry was about to be removed from private hands and “nationalized”. Shareholders would be wiped out, bondholders would take severe haircuts, management would be replaced, and credit production would be returned to the representatives of the American people, US government officials.

Do you think the prospect of nationalization might have scared the hell out of Wall Street? Do you think the banksters might have concocted some crazy plan along with Bernanke and Treasury Secretary Henry Paulson to precipitate a crisis by euthanizing Lehman Brothers so they could extort $700 billion from Congress (TARP) before launching round after round of money printing under the deliberately-opaque moniker, Quantitative Easing?

Of course, they would. These are the same guys who had already stolen trillions of dollars from credulous investors in a fraudulent mortgage laundering scam that crashed the economy and brought the financial system to the brink of ruin. Does anyone seriously think that they’d wince at the prospect of dinging the public a second time by shifting their toxic assets onto the Fed’s balance sheet or by accessing free liquidity to fuel their illicit derivatives trades or their other pernicious high-risk activities?

Keep in mind, the Fed never could have carried off this massive looting operation without the help of both the Congress and the president. This simple fact seems to escape even the most vehement critic of the Fed, that is, that the Fed needed policymakers to strangle the economy while it implemented its plan or it would have had to abandon its reflation strategy.

Well, because if the economy was allowed to rebound, then higher employment would push up wages and raw material costs which in turn would boost inflation. Higher inflation would force the Fed to raise short-term interest rates which would put the kibosh on the cheap money Wall Street needed to buy-back its own shares or engage in other risky speculation. So the real economy had to be sacrificed for Wall Street. Hence, “austerity”.

The fact that Obama’s economics team, led by Lawrence Summers, was trying to lift the economy out of recession without creating conditions for a strong recovery was evident from the very beginning. We know now that chief White House economist Christy Romer wanted a much bigger fiscal stimulus package than the $800 bil that was eventually approved. Here’s the story from the New Republic:

“Romer calculated that it would take an eye-popping $1.7-to-$1.8 trillion to fill the entire hole in the economy—the “output gap,” in economist-speak. “An ambitious goal would be to eliminate the output gap by 2011–Q1 [the first quarter of 2011], returning the economy to full employment by that date,” she wrote. “To achieve that magnitude of effective stimulus using a feasible combination of spending, taxes and transfers to states and localities would require package costing about $1.8 trillion over two years.”
(EXCLUSIVE: The Memo that Larry Summers Didn’t Want Obama to See, New Republic)

Regrettably, Romer’s recommendations “never made it into the memo the president saw.” Obama was not given the option of providing the stimulus the economy needed for a strong recovery because Summers didn’t want a strong recovery. Summers wanted the economy to sputter-along at an abysmal 2 percent GDP like it is today. That would keep a lid on inflation and allow the Fed to pump as much money into the financial markets as it pleased.

Obama has played a big role in this austerity fiasco too. For example, did you know that more government workers lost their jobs under Obama than any other president in history?

It’s true. Since Obama took office in 2008, nearly 500,000 public sector workers have gotten their pink slips. According to economist Joseph Stiglitz, if the economy had experienced a normal expansion, “there would have two million more.”

Of course, Obama never made any attempt to rehire these workers because rehiring them would have put more money in the pockets of people who would spend it which would boost GDP. Typically, economists think that’s a good thing. It’s only a bad thing when the Fed is working at cross-purposes and trying to keep a damper on inflation so it can bail out its crooked Wall Street buddies.

For more on Obama’s belt-tightening crusade, just look at his efforts to cut the budget deficits. Here’s a clip from MSNBC:

“Strong growth in individual tax collection drove the U.S. budget deficit to a fresh Obama-era low in fiscal 2015, the Treasury Department said Thursday…. The deficit is the smallest of Barack Obama’s presidency and the lowest since 2007 in both dollar terms and as a percentage of gross domestic product. (During) the Obama era, the deficit has shrunk by $1 trillion. That’s ‘trillion,’ with a ‘t.’” (MSNBC)

Why would Obama want to cut government spending when the economy was already in distress, capital investment was flagging, and households were still trying to pay down their debts?

Basic economic theory suggests that when private sector can’t spend, then the government must spend to offset deflationary pressures and prevent a major slump. Cutting the deficits removes vital fiscal stimulus from the economy. It’s like applying leeches to a patient with flu symptoms thinking that the blood-loss will hasten his recovery. It’s madness, and yet this is what Obama and the Congress have been doing for the last six years. They’ve kept their hands wrapped firmly around the economy’s neck trying to make sure the patient stays in a permanent state of narcosis.

That’s the goal, to suffocate the economy in order to reward the thieving vipers on Wall Street. And Obama and the Congress are every bit as guilty as the Fed.

Mike Whitney is a freelance writer living in Washington state.

What would a Russian defeat mean...