Home Uncategorized The Revenant: Are we all savages?

The Revenant: Are we all savages?

The Revenant, directed by Alejandro Iñárritu, screenplay by Iñárritu and Mark L. Smith, based on the novel by Michael Punke; Youth, written and directed by Paolo Sorrentino 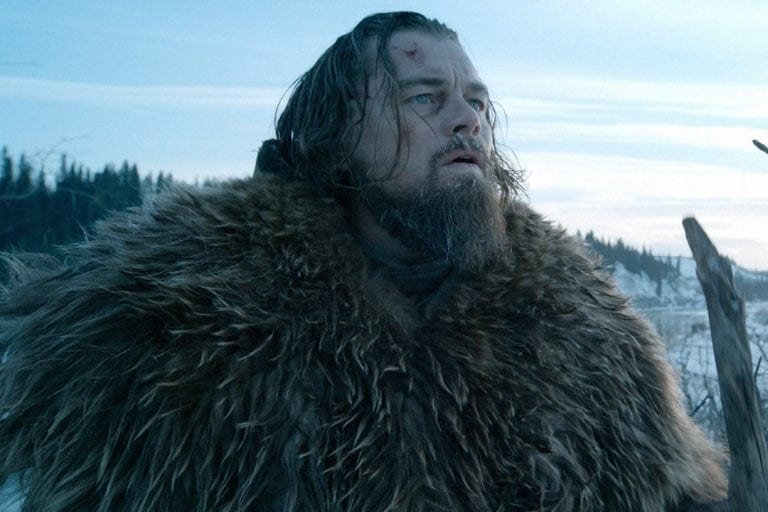 Mexican filmmaker Alejandro Iñárritu’s The Revenant is loosely based on the real-life experiences of American fur trapper and frontiersman Hugh Glass (1780–1833) and adapted from Michael Punke’s 2002 historical adventure account, The Revenant: A Novel of Revenge. Set in 1823–24, the film, while never specifying its locale, is meant to take place in the area that is now Montana, North and South Dakota and Nebraska.

Overall, The Revenant is a highly fictionalized and sensationalized chronicle of Glass’s ordeal and a harsh epoch in American history.

As a rule, Iñárritu, known for Birdman or (The Unexpected Virtue of Ignorance) (2014), Biutiful (2010), Babel (2006), 21 Grams (2003) and Amores perros (2000), revels in extreme––often cruel––behavior and seems obsessed with what he sees as humanity’s anti-social character and its physical and moral decomposition. While Birdman, with qualifications, is something of an exception, The Revenant is not.

Hugh Glass (Leonardo DiCaprio) is the scout for a party of hunters and fur traders that is attacked, as the movie opens, by warriors from the Arikara tribe. The Native Americans are seeking to steal pelts to trade them for rifles and horses with French contractors. They feel justified in assailing those who have slaughtered their people and invaded their lands.

Most of the trappers are killed in the skirmish. Those left alive include Glass, expedition leader Captain Andrew Henry (Domhnall Gleeson), Glass’s half-Pawnee son Hawk (Forrest Goodluck), another young hunter Jim Bridger (Will Poulter) and Texan John Fitzgerald (Tom Hardy), a mercenary bully and victim of an earlier partial scalping.

Soon afterward, disaster strikes Glass individually. Iñárritu makes an unbearably long and brutal scene out of his mauling by a grizzly bear. Although his body is nearly ripped to shreds (his handsome face is miraculously untouched!), the frontiersman clings to life. Henry leaves Hawk, Bridger and Fitzgerald (for payment) with Glass to tend to and bury him when the time comes. However, the money-hungry Fitzgerald kills Hawk and throws Glass into the hole he has dug for a grave.

Incredibly, the trapper regains consciousness and The Revenant continues as a saga of painful miseries, including Glass dragging his torn, mangled frame through inhospitable frozen lands and tumbling into freezing rapids as he contends with hostile Indians and thuggish French hunters (who capture and rape an Arikara girl). He is sustained and strengthened by a diet of animal carcasses and, in one scene, he disembowels and sleeps inside a dead horse. Glass is also spiritually driven by his desire to avenge his son’s murder, as well as the encouraging, beyond-the-grave whispers of his Pawnee former wife, the victim of a soldier’s bullet. 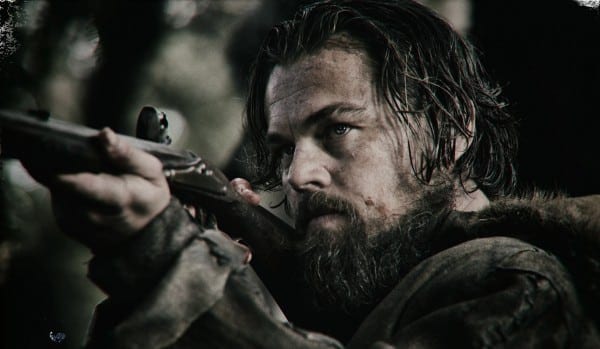 Aside from being excessively gruesome (and burdened with a touch of mysticism), Iñárritu’s film falsifies the historical record in important ways. It is true that Glass was mauled by a bear, but many other details in the film are simply made up. There is no evidence, for instance, that Glass had a Pawnee wife or a son by her. Certainly, no son was along with him in 1823 and available to be murdered by one of his fellow trappers.

The filmmakers have embellished the circumstances surrounding Glass’s abandonment to demonstrate the rottenness of humanity and the malevolence of John Fitzgerald in particular. The facts are more straightforward. First of all, the attack occurred in the summer, not in the bitter cold. Second, after the mauling, Fitzgerald and another, unidentified man agreed to stay behind with Glass until he died and provide him a “Christian” burial. Unexpectedly, he hung on. Eventually, fearing for their own lives in the face of warlike Native Americans in the vicinity, the two men left Glass––again, clearly anticipating he would expire from his wounds.

The real Glass did harbor understandable resentment and pursued the individuals who had deserted him. However, no physical confrontations ensued. As historyvshollywood.com comments, Glass “forgave them instead of exacting violent revenge. It should be noted again that in real life these men never killed Glass’s son, so forgiveness would have come more easily.”

Hiram Martin Chittenden, in his The American Fur Trade of the Far West (1901), noted that Glass may have relinquished his desire for revenge “due to new light obtained from the two men who deserted him. It was asking a great deal for those two men to expose themselves to destruction for one whose life they doubtless believed was already as good as lost, and whatever may have been the considerations of humanity, it was only heroic indifference to personal safety that could have induced them to stay. They should have stayed, of course, but their failure to do so is not without its justification.”

Such insight into human behavior is beyond our contemporary filmmakers with their cheap and self-serving misanthropy.

Provocatively adding fuel to the fire, the filmmakers have invented a scene in which Glass comes upon a Pawnee Indian hung by the French. Around the dead man’s neck is a wooden sign that reads: “On est tous des sauvages” (“We are all savages”).

One can safely conclude this is the movie’s central theme. Iñárritu and company argue that now, like then, people are primitive, quasi-bestial creatures who can only be saved apparently by a “revenant,” that is, someone who returns from the dead or undergoes (moral) resurrection. Presumably, like the ghost of Glass’s wife, those who have departed this vale of tears and––metaphorically or not––passed on to a more spiritual realm are the only possible bearers of wisdom and humanity. This is the logic of the film, whether or not Iñárritu has thought it all out.

Like many other contemporary artists, Iñárritu appears overwhelmed by global events: war, poverty, political chaos. But confusion is rarely innocent––and, in any case, not for long. 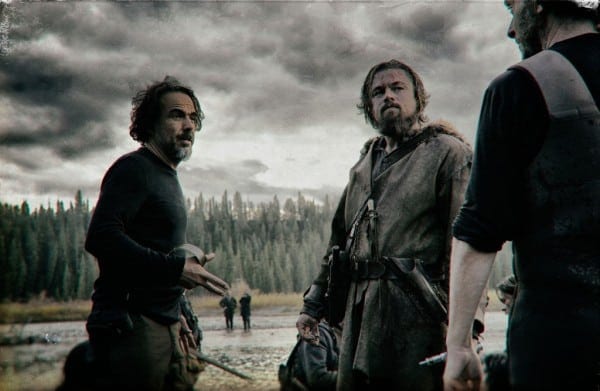 The director, left, DiCaprio and another production member debate how to stage a scene.

The worst aspect of The Revenant is its misinterpretation of US history and its implied characterization of the American people. Like Martin Scorsese’s Gangs of New York (2002), Steve McQueen’s 12 Years a Slave (2013) and Quentin Tarantino’s Django Unchained (2012) and The Hateful Eight (2015), Iñárritu’s work is not an effort to get at the objective truth of history through art. The very contemporary, self-serving purpose of each of these films is to paint America’s history as nothing but a series of psychopathic episodes and its people as vicious, racist and incapable of rational or progressive thought or action.

In the time and place ostensibly treated by The Revenant, the relationships between nature and humanity, between the Native population and the American intruders, and among the various rival fur trappers and traders were undoubtedly severe and unrelenting. The Arikara, in fact, were so antagonistic toward the American interlopers because they were in danger of being replaced as middlemen in the Missouri River trade. But all this can only be grasped as a stage in “American capitalism’s blood-soaked rise to continental power.” (Socialist Equality Party Statement of Principles)

There is a connection between the ahistorical distortions in the film and its carnage. The Revenant ’s hysteria and overwroughtness reflect accumulated social tensions, but, thanks to a falsely appropriated and misunderstood history, those tensions are attributed to a timeless, filthy human nature. To that, we oppose Marx’s insight that “all history is nothing but a continuous transformation of human nature.” (The Poverty of Philosophy, 1847)

The “extremism” and historical exoticism of The Revenant, almost universally hailed by the hopeless critics as signs of the work’s great authenticity and artistic integrity, are substitutes for confronting the basic facts of modern life.

Lastly, the filming of The Revenant was not only physically demanding, but dangerous. During a seven-month shoot in Alberta, Canada, the actors and crew often had to contend with the threat of frostbite when temperatures plunged to 40 degrees below zero (Fahrenheit or Centigrade!) A union official told the Hollywood Reporter that some 15 or 20 crew members were fired for raising safety issues. He said it was an uphill battle explaining to a studio executive in Los Angeles “the myriad of safety issues from working in deep snow—cold weather, remote locations, slippery ground, cold water and communications challenges that happen when you have a large group of people in a remote area.” Again, all this to what end?

Joanne Laurier is a senior arts and cinema critic with wsws.org, where this piece originally appeared.