As Ukraine Collapses, Europeans Tire of US Interventions 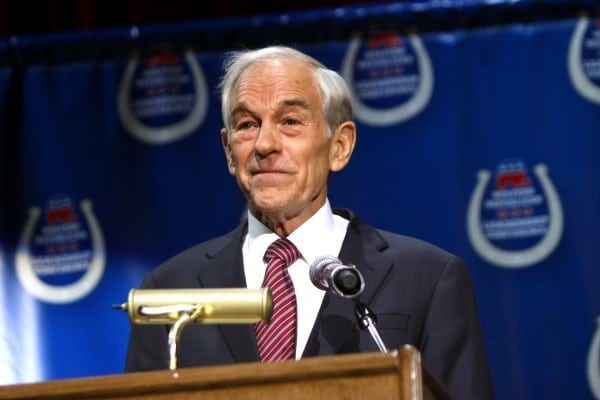 While our readers know we are absolutely firm in our rejection of libertarianism as a model for social and economic organization, primarily because it espouses an unfettered, savage capitalism in the misguided conviction that it has been “government intervention” and not capitalism itself that has created the evils of corporatism, gross inequality and criminal imperialism, we respect some of their leaders’ positions on foreign policy which, as Ron Paul sums up here, follow a non-interventionist line. This posture is obviously healthy for the nation and the world. Of course, a libertarian regime would soon find that a mature capitalism, with its huge corporations, cannot exist without meddling continually across the globe.—PG
The overwhelming rejection of the EU plan for Ukrainian membership demonstrates the deep level of frustration and anger in Europe over Washington’s interventionist foreign policy. On Sunday Ukrainian prime minister Yatsenyuk resigned, just four days after the Dutch voted against Ukraine joining the European Union. Taken together, these two events are clear signals that the US-backed coup in Ukraine has not given that country freedom and democracy. They also suggest a deeper dissatisfaction among Europeans over Washington’s addiction to interventionism.

According to US and EU governments – and repeated without question by the mainstream media – the Ukrainian people stood up on their own in 2014 to throw off the chains of a corrupt government in the back pocket of Moscow and finally plant themselves in the pro-west camp. According to these people, US government personnel who handed out cookies and even took the stage in Kiev to urge the people to overthrow their government had nothing at all to do with the coup.

When Assistant Secretary of State Victoria Nuland was videotaped bragging about how the US government spent $5 billion to “promote democracy” in Ukraine, it had nothing to do with the overthrow of the Yanukovich government. When Nuland was recorded telling the US Ambassador in Kiev that Yatsenyuk is the US choice for prime minister, it was not US interference in the internal affairs of Ukraine. In fact, the neocons still consider it a “conspiracy theory” to suggest the US had anything to do with the overthrow.

I have no doubt that the previous government was corrupt. Corruption is the stock-in-trade of governments. But according to Transparency International, corruption in the Ukrainian government is about the same after the US-backed coup as it was before. So the intervention failed to improve anything, and now the US-installed government is falling apart. Is a Ukraine in chaos to be considered a Washington success story?

This brings us back to the Dutch vote. The overwhelming rejection of the EU plan for Ukrainian membership demonstrates the deep level of frustration and anger in Europe over EU leadership following Washington’s interventionist foreign policy at the expense of European security and prosperity. The other EU member countries did not even dare hold popular referenda on the matter – their parliaments rubber-stamped the agreement.

Brussels backs US bombing in the Middle East and hundreds of thousands of refugees produced by the bombing overwhelm Europe. The people are told they must be taxed even more to pay for the victims of Washington’s foreign policy.

Brussels backs US regime change plans for Ukraine and EU citizens are told they must bear the burden of bringing an economic basket case up to European standards. How much would it cost EU citizens to bring in Ukraine as a member? No one dares mention it. But Europeans are rightly angry with their leaders blindly following Washington and then leaving them holding the bag.

The anger is rising and there is no telling where it will end. In June, the United Kingdom will vote on whether to exit the European Union. The campaign for an exit is broad-based, bringing in conservatives, populists, and progressives. Regardless of the outcome, the vote should be considered very important. Europeans are tired of their unelected leaders in Brussels pushing them around and destroying their financial and personal security by following Washington’s foolish interventionism. No one can call any of these recent interventions a success and the Europeans know it.

One way or the other, the US empire is coming to an end. Either the money will go or the allies will go, but it cannot be sustained. The sooner the American people demand an end to these foolish policies the better.

About the author
Ron Paul is a prominent politician and leader of libertarians in the United States. His son, Rand Paul, is a junior Senator in the US Congress.

Socialist Senator Explains the Difference Between Democrats and Republicans