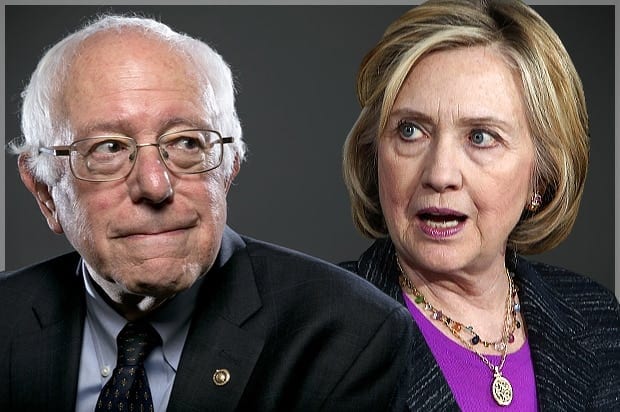 I listened to the CNN-carried debate between Hillary Rodham Clinton and Bernie Sanders, and it was quite disturbing on matters of imperialist foreign policy and war vs. peace.   What jumped out of the TV screen, was a remark by HRC in response to Bernie’s suggestion of less U.S. spending on NATO. She actually said that she would “look for new missions” to keep NATO activated and effectively corralled into stampeding under U.S. leadership. To translate the politicianese into plain English, HRC would be aggressively “looking for” trouble around the world, and stampeding NATO into wars, military interventions and imperialist occupations, “missions” of opportunity.
If that is the campaign rhetoric, we can infer actions more horrendous, once in power! No one voting for HRC can deny that it is a vote for escalation to World War 3.
How could anyone argue that we cannot vote power to any homicidal maniac who would perform such atrocities, be they in the guise of a Black man (Obomber), a white woman (HRC), or any other identity among the various shape-shifts of candidates in the American political lineup.
We have to soberly consider that for all his promises (which continue to fool and confuse a substantial part of the population at home and abroad), Barrack Obomber lied us into more wars than Dubya, including but not limited to Libya, Syria, and the confrontation with Russia over Ukraine.

In all of these, HRC, as Secretary of State and since, worked tirelessly as the hawk leader of the flock, lying to the country, including the president, into regime change wars, whenever the administration as a whole was hesitating, vacillating or oscillating, and this is well documented by respected sources from the New York Times to Democracy Now. One can argue that as President, Obomber bears the ultimate responsibility. That, however, is not a defense of HRC and others who persuaded him, against contrary advice from even the Secretary of Defense, who opined he did not think the U.S. had vital interests in such areas, and Obomber and others who posited the U.S. would lead from behind on such adventures.

Do we excuse Condoleezza Rice, Dick Cheney, Donald Rumsfeld or Henry Kissinger for the crimes against humanity, war crimes and crimes against peace, during their respective regimes? At Nuremberg, weren’t cabinet members, alongside certain Nazi agitators who were not even part of the regime, tried and hanged?
[dropcap]T[/dropcap]he British and French had already begun bombing Libya to smithereens, a virtually defenseless country when pitted against the power of NATO’s most advanced military inventory, in support of mercenary contras and misogynistic religious zealots who, armed, equipped, organized and controlled by such powers, proceeded to kill thousands of civilians that overwhelming supported their government under Muamar Qaddafi.

It is indeed a matter of record that HRC treasonously worked with the British and French to shame the U.S. administration (granted Obama didn’t need a lot of shaming to go along since he has always agreed with the broader neocon agenda for the Middle East, Ukraine, etc.), boring from within, into leading the attack and the mass murder through bombing. As Secretary of State, HRC was also instrumental in persuading Russia and China to abstain on, rather than veto, a UN resolution used to place the mass murder under the color of justification. Without that amber/green light, the bloody imperialist war crime might have been impossible!

After Libya, it was on to Syria, and again, the creation of a “ruffian band” of mercenaries armed better than the Syrian Army, resulting again in many tens of thousands of civilian and military deaths, and the thorough destruction of virtually almost the entire country and its economy. In opposition to even the Obomber regime, currently, HRC  still calls for a no-fly zone, entailing direct combat aimed at shooting down Russian planes operating there with the fullest permission of the Syrian government.
So her role was key, just as was her vote in the Senate to approve the Bush-Cheney-Rumsfeld, illegal and dishonestly “sold” attack on Iraq. She was not just any old Senator, but the ex-First Lady and a standard bearer of the supposed “opposition party”. Her vote over Iraq consistently followed her role of helping push her husband Bill Clinton’s into the bombing of Yugoslavia, including permanently salting their soil with radioactive depleted uranium (as documented elsewhere, including Fallujah), visiting untold generations of birth defects.
HRC stands clearly and vociferously to the right of Bernie Sanders on every issue, even if the differences are often when properly scrutinized not more than merely modest.  Still, to his credit, Sanders has criticized the Israeli state for disproportionate violence in its military slaughter of 1,500 defenseless Palestinian civilians and wounding many times more, and for the general oppression of the Palestinian people. Thus, regrettably, while voicing such complaints, Sanders has not gone to the heart of the matter, that is the fundamental nature of a state based on Jewish supremacy and ethnic cleansing of indigenous Palestinians by imperialist-sponsored white settlers. In keeping with this bankrupt line, Sanders repeatedly claims he is “100%” pro-Israel.” On the positive side of the ledger he has however expressed some mild reluctance at the prospect of regime-change wars.
I know there are a lot of people out there that still believe in “holding your nose” while voting for imperialist Democrats as the “lesser evil”.  At least, then, in the current circumstances, if you register your opposition to HRC by sticking with Bernie until the very last minute, you will help create a statistic that demonstrates “holding your nose”.
Bernie says we need a political revolution. But what that requires is a social revolution, a real uprising and mobilization by millions of people, creating a new government based on the working class and allied layers, the overturning of capitalism, white supremacy, male supremacy, heterosexual supremacy, etc., thereby ushering in the material basis for a real democratic republic, rather than rule by a handful of billionaire corporatists, bankers and their hacks.

We need organization, both mass and specialized, structured for, focused on, and committed to, solidarity in accomplishing that vision.

About the author
A Brooklyn native, Joel Meyers is a resident of NYC.  He attended the University of Buffalo and worked in the old Bethlehem Steel Mill in that city.  He has spent many years as an activist against war and social injustice. You may reach him at: meyersjoel@yahoo.com

“At least, then, in the current circumstances, if you register your opposition to HRC by sticking with Bernie until the very last minute, you will help create a statistic that demonstrates “holding your nose”.

Not voting is a vote for Hilary… She wants you to not vote… You will be playing right into her grubby, greedy hands.

Waiting for the revolution…. Don’t hold your breath.

So you aren’t voting for Bernie, then this is what you get: http://www.huffingtonpost.com/seth-abramson/release-of-clintons-wall-street-speeches_b_9698632.html “The reason you and I will never see the transcripts of Hillary Clinton’s speeches to Wall Street fat-cats — and the reason she’s established a nonsensical condition for their release, that being an agreement by members of another party, involved in a separate primary, to do the same — is that if she were ever to release those transcripts, it could end her candidacy for president. Please don’t take my word for it, though. Nor even that of the many neutral observers in the media who are… Read more »