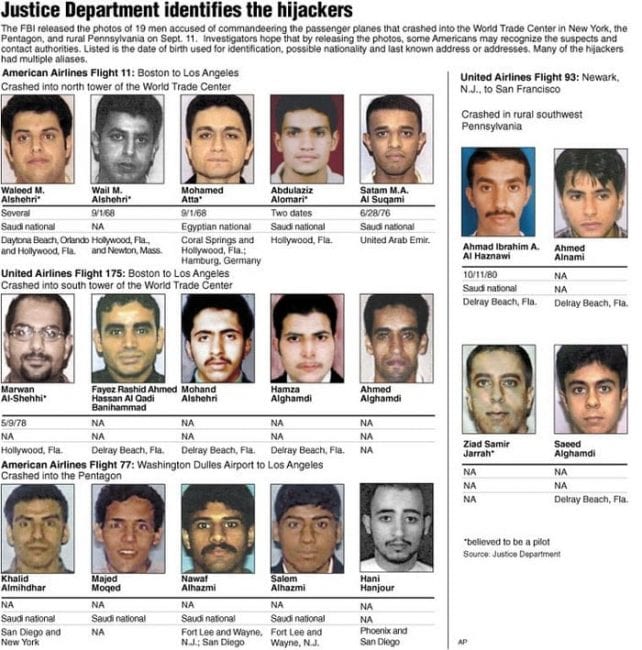 The official 9/11 hijackers. Who was behind them?  Take a clue: Almost all of them were Saudi nationals. Yet it was Iraq that was invaded.

I have written on the 9/11 controversy and who might have been really responsible for it on a number of occasions, the most recent time being here.  In that column, I noted that, thanks to Allen Roland (9/11/12), I had previously noted that folks much more important than I have raised their own serious questions about the most common 9/11 conspiracy theory.  For openers, see the website 9/11 Truth.

I don’t think that the no-sayers are really concerned with the possible Saudi reaction, especially since, to repeat, the Saudi Royal Family itself has asked for the text to be released.  No.  I think that the concern runs much deeper than that, possibly all the way back to Bush/Cheney and their possible role in the disaster.

And now the “28 Pages” controversy is back on the front pages.  According to a current The New Yorker article:

“On the bottom floor of the United States Capitol’s new underground visitors’ center, there is a secure room where the House Intelligence Committee maintains highly classified files. One of those files is titled ‘Finding, Discussion and Narrative Regarding Certain Sensitive National Security Matters.’ It is twenty-eight pages long. In 2002, the Administration of George W. Bush excised those pages from the report of the Joint Congressional Inquiry into the 9/11 attacks. President Bush said then that publication of that section of the report would damage American intelligence operations, revealing ‘sources and methods that would make it harder for us to win the war on terror.’ “

‘There’s nothing in it about national security,’ Walter Jones, a Republican congressman from North Carolina who has read the missing pages, contends. ‘It’s about the Bush Administration and its relationship with the Saudis.’ Stephen Lynch, a Massachusetts Democrat, told me that the document is ‘stunning in its clarity,’ and that it offers direct evidence of complicity on the part of certain Saudi individuals and entities in Al Qaeda’s attack on America. ‘Those twenty-eight pages tell a story that has been completely removed from the 9/11 Report,’ Lynch maintains. Another congressman who has read the document said that the evidence of Saudi government support for the 9/11 hijacking is ‘very disturbing,’ and that ‘the real question is whether it was sanctioned at the royal-family level or beneath that, and whether these leads were followed through.’ Now, in a rare example of bipartisanship, Jones and Lynch have co-sponsored a resolution requesting that the Obama Administration declassify the pages.” 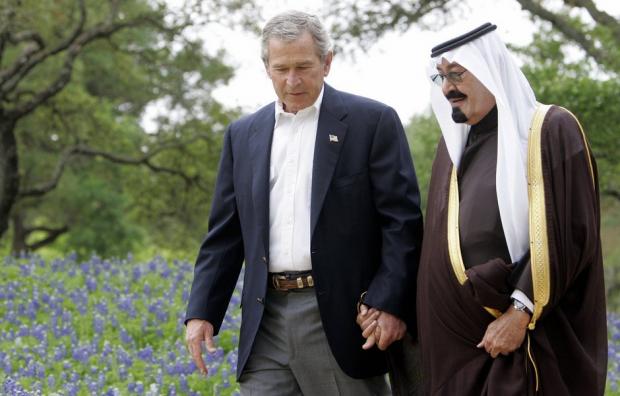 Just pals, uh?  American leaders have been close to the Saudi royal despots for generations, but the Bush clan has taken the affiliation to new, undignified heights. Photo: George W Bush with the late King Abdullah.

[dropcap]I[/dropcap]t is fascinating that the Saudi Royal Family (that is, the “government” of Saudi Arabia) itself is asking that the document be de-classified and released.  Through their decades-long connection with the Bush family, going back to when GHW Bush was the Director of the CIA in the 1970s and they had conjoint corporate interests in something called the “Carlyle Group,” they likely already know what is in it.  Thus it is likely that it contains nothing too damning about them.  The ostensible push from Congress for its release at this time is to enable families of 9/11 victims to sue the Saudi government or individual Saudis who gave money to right-wing Islamic causes and possibly directly to one or more of the high-jackers, for compensation.

[dropcap]T[/dropcap]he “No” response has been very strong, ranging from Richard Haass, President of the Council on Foreign Relations to Philip Zelikow, who was the Staff Director of the 9/11 Commission (who also happened to have been the staff director for the George W. Bush Presidential Transition Team). “Oh such terrible things would happen to our relations with the Saudis,” they claim (and do recall that the high-jackers were for the most part Saudis).  But if that were the case, why would the Saudi Royal Family be pushing for the document’s release?  “It’s just a police report, a collection of fact and speculation, with no conclusions.”  Ah well, that’s just the point, isn’t it?

Recall the following. Bush/Cheney did not want there to be any kind of official investigation of 9/11, and agreed to set up the Commission only under enormous pressure.  Bush and Cheney themselves testified before the Commission not under oath and Cheney would not allow Bush to appear by himself.  There is that long list above of senior people, mainly from the government, who have raised major questions about the Report.  If indeed “The 28 Pages” are “just a police report” that would, if it raised unanswered questions (which apparently it does), provide a strong impetus for reopening the whole investigation.  It might also stimulate the formation of a Commission to investigate the Pentagon disaster, which has never been the subject of a formal inquiry.  (I would want it to start with the question: how could a hollow aluminum tube — that is an airplane — penetrate heavily reinforced concrete, at not one but two levels into the building, and, by-the-by, leave no wreckage along the way?)

In my view, I don’t think that the no-sayers are really concerned with the possible Saudi reaction, especially since, to repeat, the Saudi Royal Family itself has asked for the text to be released.  No.  I think that the concern runs much deeper than that, possibly all the way back to Bush/Cheney and their possible role in the disaster.

There is not space here to go through the whole collection of evidence that indicates a) that the Commission Report is far from complete or accurate, and b) that indeed the standard conspiracy theory simply does not hold water.  But just consider the following collection of facts which, could be connected into a very sinister picture.  Just sayin’.

The Bush family had a long-standing relationship with Osama-bin-Laden’s father, a major construction magnate in Saudi Arabia.  As a young man, Osama bin Laden was a CIA asset, working with the forces that Zbig Brzezinski put together to overthrow the Soviet-supported government in Afghanistan.  The two key Saudi operatives who came to this country to take flying lessons on commercial aircraft with a number of their countrymen spoke no English and apparently had no previous flight experience.  Bush, to repeat, did not want to have a Commission, did not testify under oath, did not testify by himself, and ordered the retention of “The 28 Pages.”  New York City Mayor Rudy Giuliani made sure that all of the Twin Towers wreckage was scooped up and buried in the New Jersey swamps before any forensic work could be done on it. 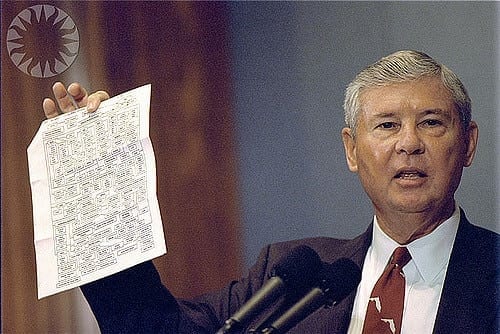 [dropcap]F[/dropcap]ormer Florida Governor and Senator Bob Graham, who strongly supports the release, has been concerned about its retention from the time it happened.  He has often given the impression (to me at least) that he knows much more about what really happened than he either wants to reveal or simply cannot, because of some oath or other (or something else?)  During the three-day no-fly zone that was created over all of the U.S. immediately after the disaster, 18 (if I recall the number correctly) members of Osama bin Laden’s family who were in the United States were flown out on a private jet, before the FBI could have access to them for questioning.

Cheney has never been officially questioned about the “stand-down” order he may have given that would have over-ridden the standard operating procedure for dealing with high-jacked airplanes if no response were obtained from them: shoot them down.  Nor has he been questioned, under oath, and in depth, about why on that day he took over supreme command from Bush (somehow displacing the next in command, Sec. of Defense Donald Rumsfeld), Bush who was apparently dumb-struck when he was given the news whilst he was reading a children’s story at a school.  So dumb-struck was he, it appeared, that he just kept on reading.

There are just too many un-answered questions about a possible Bush-Cheney connection to the whole horror.  (And do recall that Bush ignored a whole series of CIA warnings about a possible al Qaeda/bin Laden attack through the summer of 2001, not just the famous August 6 one).  There may or may not have been one.  But those forces that do not want “The 28 Pages” released are certainly concerned that the follow-ups to it might very well lead to that conclusion, with possible political, economic, legal, criminal justice, and family outcomes, some of which are beyond comprehension at this time.  But that is what I think the whole “No Release” movement is all about.  Not some concern about suing or not suing various Saudis, within and without the Royal Family, and what consequences that might have down the road for foreigners suing the United States about the legion of damage and death that U.S. foreign and military policies have wreaked around the world for many decades now.  It’s all about 9/11 and the possible involvement of U.S. government officials at a very high level in it.  Just sayin’.