During his UK visit, Obama’s London Telegraph op-ed was duplicitous like all his remarks. The headline alone gave it away this time, saying “(a)s your friend, let me say that the EU makes Britain even greater.”

Neoliberal Europe reveals otherwise, benefitting monied interests exclusively, harming most others, devastating least advantaged households throughout the EU. Obama’s op-ed meddled unjustifiably in the affairs of another country. It made painful reading, ignoring issues mattering most to ordinary Brits, ones affecting their economic, financial and social welfare, suffering under force-fed neoliberal austerity.

Instead of explaining a failed Western experiment, Obama urged greater commitment to NATO, the need to counter nonexistent “Russian aggression, (and) meet(ing) our overseas commitments” in US-instigated war theaters.  “(W)e must continue to promote global growth, so that our young people can achieve greater opportunity and prosperity,” Obama ranted. 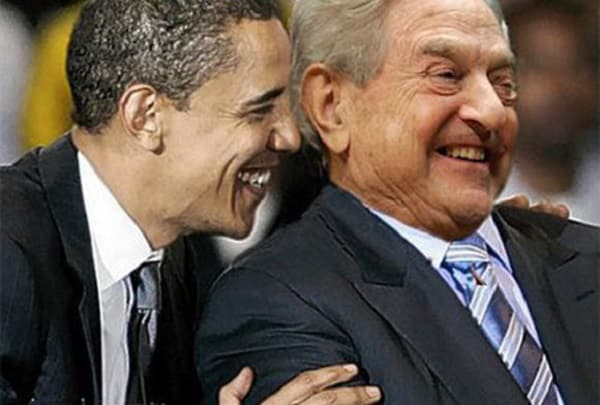 Soros and Obama. Obama specializes in sucking up to the powerful, that’s his mission in life, the signature of his entire career. He’s by far the best and most malignant Uncle Tom in history. [Nuova Resistenza]

It’s grand theft, anti-democratic, a corporate coup d’etat fascist takeover, a jobs killer/environment destroyer, a thirdworldizing scheme, an assault on personal freedoms, nightmarish for ordinary people everywhere. It’s a zero-sum game – everything for business, exploitation for millions in all nations joining the deal.  Obama endorses what amounts to a neoserfdom scheme. So does Hillary Clinton, backing TPP and TTIP, uncaring about the harm to ordinary people. Ignore her more recent campaign rhetoric suggesting opposition.

TTP and TTIP were and continue to be secretly negotiated because what corporate predators want is so draconian, so harmful to public welfare and fundamental rights, widespread public knowledge could undermine their coming into force.  Countries involved in both agreements account for about 90% of global GDP. Freeing their business interests from legal restraints other than what both agreements stipulate lets them rule the world unhindered.

Civil societies will be unprotected from their predations. Ordinary people will have no way to challenge their abuses.  Sovereign states will be transformed into facilitators for corporate predation – the public interest, fundamental rights and environmental sanity be damned.

If you appreciate our articles, do the right thing and let us know by subscribing. It’s free and it implies no obligation to you—ever. We just want to have a way to reach our most loyal readers on important occasions when their input is necessary.  In return you get our email newsletter compiling the best of The Greanville Post several times a week.
[email-subscribers namefield=”YES” desc=”” group=”Public”]
Reg vis: 0
Make sure many more people see this. It's literally a matter of life an death. Imperial lies kill! Share widely.
0
FacebookTwitterPinterestRedditEmail
previous post

Broke and Paranoid…How the US Risks Nuclear War