The US plutocracy is addicted to its global hegemony, and aims to keep its malignant unilateral supremacy at any cost to humanity and the planet. Obama and his ilk, along with the lying corporate media, are simply its instruments, the prostitutes it uses to push this nefarious agenda. 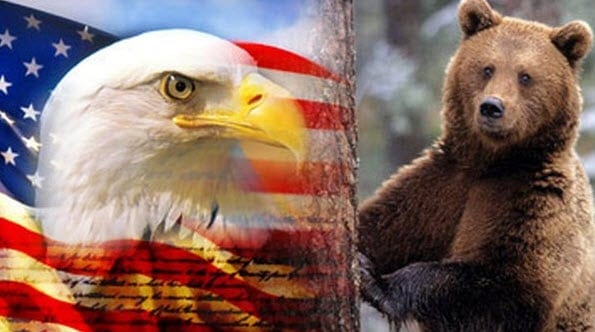 How many times can this pesky eagle provoke the bear without getting into some serious trouble?

On April 27th, NATO member-state Turkey, which on 24 November 2015 had shot down a Russian Su-24 fighter jet near the Syria-Turkey border, refused Russia’s request to investigate Turkey’s having murdered the surviving Russian pilot. (The plane’s weapons-systems officer was rescued, but the pilot was shot dead while parachuting down from the plane.) Turkey admits having in custody the man, Alparslan Celik, who murdered the parachuting pilot. On April 25th, Turkish authorities had said that they might try Celik for murder; but, now, the Turkish Ambassador in Moscow says Turkey won’t.

Sometimes we wonder if anybody is paying attention. Clearly the left has to concentrate on devising ways to break the media wall keeping the masses inside an Orwellian version of reality conducive to their own destruction.—Editors

Also related to the step-up to war, Russia has reported on April 25th, that it’s responding to America’s recently announced quadrupling of its troops and armaments in the Baltic republics on and near Russia’s northwestern Black Sea borders, by Russia’s sending “more than ten” warships of its own to coastal waters there, for “training exercises,” just as the U.S. troops and weapons are likewise there for “training exercises”, as both sides prepare for an increasingly likely war between NATO and Russia.

If such war occurs, it will be World War III; so, that’s where things are heading, unless and until these escalations reverse on both sides, to avert it.

U.S. President Barack Obama gives, as his cause for his economic sanctions against Russia and for NATO’s subsequent increases in men and materiel being stationed on and near Russia’s borders, what Obama calls Russia’s ‘seizure’ of Crimea from Ukraine. The Soviet dictator Nikita Khrushchev had transferred Crimea from Russia to Ukraine in 1954, but polls of Crimeans always showed overwhelming public opposition to that, and this opposition became especially intense right after the Obama Administration’s coup in Ukraine in February 2014 overthrew with much bloodshed Ukraine’s freely elected President Viktor Yanukovych, for whom 75% of Crimeans had voted. That’s when Crimeans asked Russia to protect them. Russia complied, and Obama and NATO call that restoration of Crimea to Russia a ‘seizure’ of Crimea by Russia. This is supposedly what has sparked the post-February-2014 military escalation between the U.S.-NATO and Russia — and, perhaps (unless the U.S.-NATO side decide to accept Crimea’s return to Russia) WW III.

[dropcap]O[/dropcap]n April 25th, Obama personally asked the leaders of Germany, France, UK, and Italy, to contribute to the increased NATO troops and weapons near Russia’s Baltic borders. Nothing was announced from that meeting. Clearly, the U.S. is leading the movement toward WW III. Neither the main leaders of Europe, nor — certainly — Russia, seem to be nearly so eager. However, U.S. President Obama says that his concerns are purely of a ‘defensive’ nature — to ‘defend’ the NATO alliance, and the entire world (including Ukraine), from ‘Russian aggression’. He denies that Russia is taking necessary defensive measures against America’s aggression. However, Russia’s President Vladimir Putin says that that’s the way he is seeing things.

Iraq – US Apocalypse in Mosul in the Guise of Bombing ISIS

Oil and the Global Capitalist Crisis

The state is occupied by multinational sponsors who squashed all that are not economic benefits.
Too many times repeated lies “have attacked us.”
People need peace, states promote wars