Home IMPERIALIST FRONTS US: tuning weaponry in order to neutralise its ‘power rivals’

US: tuning weaponry in order to neutralise its ‘power rivals’ 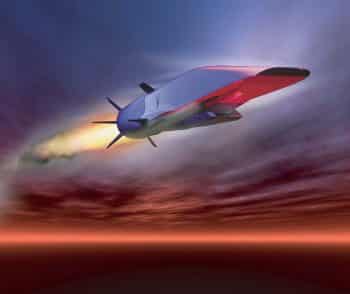 US Air Force graphic of the X-51A Waverider, a hypersonic scramjet capable of hitting a target within an hour.

[dropcap]O[/dropcap]ne of the main objectives, as revealed by recent statements of high ranking officials in the US Department for Defence is to ‘neutralise’ the political, military and economic progress of powers such as Russia and China which constitute an obstacle to Washington’s thirst for global domination.

To this end (and others) the US will have during the course of the 2017 fiscal year, which begins on the 1st of October, recourse to a budget in the region of $600 billion: a figure which exceeds (as has been the case during other periods in the past) the military spending of almost all of the other top twenty countries in the world in terms of arms expenditure.

Although President Obama has been speaking out since 2009 about the need for a world ‘free of nuclear arms,’ he has endorsed a programme for modernising these weapons: one which seeks to improve their accuracy and increase their destructive capabilities. According to The New York Times and at a time when Obama is coming to the end of his term in power, the debate on this topic has profound implications for the country’s military strategy, federal spending and his own legacy.

American scientists are developing a new model of nuclear bomb as part of a process aimed at revitalising their atomic warheads – making them smaller, more accurate and difficult for radar to detect – at an estimated cost of more than a trillion dollars.

In addition, a programme aimed at manufacturing a thousand (technologically) high end cruise rockets which carry nuclear warheads at a cost of $30 billion is reaching completion.

The Chinese government expressed its deep concern over the potential consequences of these plans on the world’s geopolitical balance and Russia called them irresponsible and openly provocative. {Of course, as usual, the American people don’t have a clue about any of this, nor its implications. This is how their money is wasted by the ruling class.—Editor]

In recent weeks, high ranking officials and military personnel from Obama’s administration discussed these and other reforms before the Senate, the House of Representatives, the press and also academic institutions committed to studying defence and security issues.

The president of the board of the Joint Chiefs of Staff, General Joseph Dunford indicated that the US must adjust its thinking concerning the action it takes in wars it will face in the future ‘in many regions and in a variety of different kinds of combat.’

Dunford confirmed that Commander-in-Chief of the US Obama is examining the changes which the various other American Chiefs-of-Staff must make to achieve these dynamic and complex new operations which would include terrestrial, naval and air combat as well as that conducted in cyberspace.

Obama’s aim is for his armed forces to act as a deterrent to any potential opponent that might wish to challenge the US’s position in the world and as such they are to be ready to be deployed wherever Washington feels its interests threatened. (Which is everywhere.) Dunford, who is the highest ranking American official, made this assertion during an event at the end of March at the Centre for International and Strategic Studies (CSIS), one of the main think tanks whose headquarters are in Washington D.C.

According to the general, although the US armed forces were well prepared for the wars it was engaged in over the last 15 years in Iraq and Afghanistan, ‘significant changes’ are needed to prepare for the more complex conflicts of the future.

He recognised with regards to this that the armed forces’ abilities in terms of their leadership, control, organisation, infrastructure, defence against ballistic missiles and intelligence are not up to dealing with the more comprehensive nature and ‘broader spectrum’ of current wars.

Some of the proposals for reform will be presented publicly to Congress over the next few weeks – in order to canvass for the corresponding finance – but others may be included in a more detailed and classified report.

The basic mission behind this is to create the conditions under which the US can stand up to countries which it deems to be its main enemies among which Dunford cited Russia, China, Iran and North Korea.

However, the high ranking chief pointed to terrorism as the most important challenge facing the US currently and indicated that the main objectives of the Pentagon are directed at eliminating terrorist leaders and fighters as well as the war capabilities of Islamic State (IS). Currently, the campaign of the military coalition led by the US aims to place simultaneous pressure on IS in Iraq and Syria, however as for Syria Dunford recognises that the coalition faces serious difficulties in achieving its planned objectives.

[dropcap]A[/dropcap]gainst this backdrop, the US Department for Defence made it known on the 25th of March that it was planning to step up the number of military personnel in Iraq – where the Pentagon has some 5,000 soldiers deployed – and plans are awaiting discussion with Obama.

The announcement took place a few days after commemorating, on the 19th of March, the 13th anniversary of the start of the invasion of Iraq: considered by experts to be one of America’s biggest foreign policy disasters.

In this war, 4,048 US soldiers died and 32,000 were wounded at a cost of over $767 billion. In the opinion of the official shortlisted Presidential candidate Donald Trump this war ‘was a big mistake because we caused great damage not only to the Middle East, which is completely destabilised, but to the whole of humanity.’ gnate considers that the more than five trillion dollars spent on Iraq would have been better spent on schools, hospitals, roads, airports and on other areas of the country’s infrastructure.

Obama’s proposals for reform are being interpreted as an attempt to neutralise strong criticism from Republican opposition levelled at his policies towards ISIS and in dealing with the threat posed by the US’s global rivals.

Seen in this context, Republican congressman Ryan Zinke indicated that the strategy in Iraq deployed in recent years by the head of the White House created a power vacuum which occasioned the emergence and development of ISIS. [The rise of ISIS was largely deliberate, with plenty of aid by Washington and its accomplices in the Gulf and elsewhere.—Editors]

Criticisms are also evident in academic and political circles including even Democrat congressmen allied with Obama.

The unending conflict in Afghanistan, the complex situation in Iraq given the military operations of IS, the possibility of an escalation of opposition against fundamentalists in Libya and the worsening of other conflicts in Europe and Asia clearly make for a complex situation for the US leader. (PL)

Exemption 5 FOIA Reform Would Not Have Chilling Effect on Agency Deliberations, MDR Fees Should Be Comparable to FOIA Fees, and More: FRINFORMSUM 4/28/2016

Enormous success on the Russian side

WaPo Stealth-Edits Their Story: The Dishonest Weaponization of...