Brazil: Fighting in the Streets

Reports, News Flashes, and Commentary from Various Conflict Zones Around the Globe
HUMANITY IN TORMENT 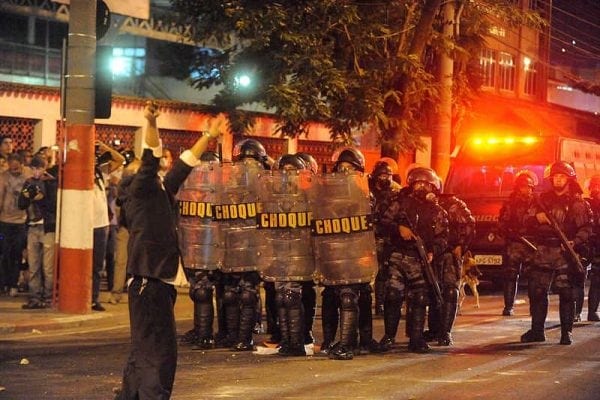 Practice makes perfect they say, and the US has refined its coup strategy to a fine art. How simple it is to bring down any government that seems disadvantageous to the US desires at the time. The US is now sweeping back through South America, apparently reshaping governments and policies at will. (rw)

The coup has been consummated. Brazil now joins Honduras and Paraguay in the list of countries that Imperialism used as a giant laboratory to test, with undoubtable success, their technique to destitute neo-developmentalist governments. This recipe is labeled as “moderate” by some analysts that are not experiencing its results in their own flesh, and for those who compare it with the inhuman dictatorships that these countries suffered a few decades ago. In fact, they are brutal, like capitalism is in essence. In Argentina, for example, in just a few months, 120,000 workers were laid off, as inflation increased dramatically, crushing hopes for a better future. This onslaught in Latin America has to be analyzed in a broader context: it’s part of the same strategy that the heads of Washington DC implemented in the Middle East, destroying one country after the other, until they found out they could attain the same results with more ease in Latin America.

What these coups have in common is that they were propelled by a reaction against the most basic reforms in favor of the people. Each and every one of the heads of state that the coups destituted was targeted only because they began to design some social policies for the sectors that the neoliberalism of the 90s had, plain and simply, thrown into exclusion. Their measures weren’t even revolutionary, such as nationalizing foreign commerce, or making the agrarian reform. On the contrary, the case of Brazil pathetically shows that it didn’t matter to them that Dilma did all types of concessions and made alliances with their side that derived in austerity policies that were clearly in line with the neoliberal project. The bourgeoisie kept attacking from every flank and eroding, day after day, the Workers’ Party (PT).

Unlike the Argentine right-wing and media, which managed to get Mauricio Macri democratically elected, their Brazilian peers forcefully clawed their way into the Presidential house by using the institutions as weapons. Their candidate, Michel Temer, has enough criminal records to enter the Itai Prison instead of the Planalto Palace. But the increasingly discredited bourgeois democracy will allow him to attempt a plan for adjustment that has been plotted by the think-tanks of the opposition.

In fact, it’s announced that the infamous people that were in power with former neoliberal  president Henrique Cardoso will return, and that officers and allies of the IMF and the World Bank will arrive in the country hand in hand with local right-wing leader Aécio Neves. Of all these comebacks, the most disturbing one is that of Henrique Meirelles, who was in charge of the Central Bank under Lula’s Presidencies, between 2003 and 2011, when the economy was peaking unlike these days. Meirelles, a neoliberal whose tendencies were muzzled under Lula’s administration, currently is an executive for big transnational companies and trusted by members of the US Republican Party, will promote in the Ministry of Finance a policy of austerity and indebtment, following the steps that his colleague Joaquim Levy began under Dilma’s administration.

Encouraged by their “victory”, in the next six months without Dilma in power, the Brazilian right is going to try to avoid her comeback (which at this point seems unlikely), and also avoid that Lula da Silva, the only charismatic leader of the working class, holds any chance to win future elections.

However, although the right thinks their dreams of privatizations, layoffs and devaluation are going to soon come true, there’s a factor that they must take into consideration: it’s the enormous popular resistance that for several months has taken over the streets of Brazil. Those workers and peasants that stood up with determination against the austerity policies of former Minister Levy and the pro-agribusiness policies of former Minister Katia Abreu —both of them members of Dilma’s government. They block roads, they man the barricades, they light up when they hear their peers chanting slogans for “land, housing, work!”, they march for kilometers to denounce that the people of Brazil has been waiting for years for unfulfilled promises. They are workers that chose against occupying seats and defend the class autonomy, precisely to not drown the revolutionary ideas they possess in the sewers of bureaucracy and politicking. That’s the real Brazil, with its Landless and its Homeless, with its metal workers from the ABC union or the combative Mercedes Benz workers, who cried out loud that “there will be no coup”. They are the grassroots from which the resistance will emerge from today on, against this tragic May 12, and will try to counteract Temer’s and his partners’ will to govern the country.

If you appreciate our articles, do the right thing and let us know by subscribing. It’s free and it implies no obligation to you—ever. We just want to have a way to reach our most loyal readers on important occasions when their input is necessary.  In return you get our email newsletter compiling the best of The Greanville Post several times a week.
[email-subscribers namefield=”YES” desc=”” group=”Public”]
RevisShielded: 0
All comments subject to anti-hacking filters.
0
FacebookTwitterPinterestRedditEmail
previous post

Why I Am a Communist!

The Epidemic And Hezbollah Add To Netanyahoo’s Problems

Caleb Maupin on evilness of imperialism, the Sino-Russian...