PUTIN IS ON TO OBAMA’S ENORMOUS LIES, AND THAT IS A FACT. BUT THE US PUBLIC DON’T HAVE A CLUE OF WHAT’S COMING.

On Friday, May 27th, Russia’s President Vladimir Putin again said that American President Barack Obama lies when saying that the reason America’s anti-ballistic missile (“ABM”) or Ballistic Missile Defense (“BMD”) system is being installed in Romania, and will soon be installed in Poland, is to protect Europe from Iranian missiles that don’t even exist and that Obama himself says won’t exist because of Obama’s deal with Iran. Putin is saying: I know that you are lying there, not being honest. You’re aiming to disable our retaliatory capacity here, not Iran’s. I’m not so dumb as to believe so transparent a lie as your assurances that this is about Iran, not about Russia.

Putin says that ABMs such as America is installing, disable a country’s (in this case, Russia’s) ability to retaliate against a blitz invasion — something increasingly likely from NATO now as NATO has extended right up to Russia’s very borders — and that Russia will not allow this disabling of Russia’s retaliatory forces. 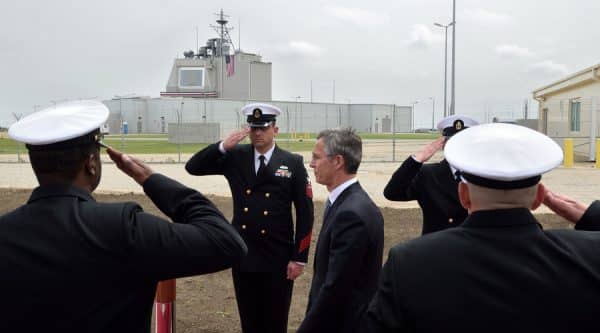 NATO Secretary General Jens Stoltenberg (C) —a prominent Washington stooge, along with other vassal European “leaders”—reviews an honour guard during an inauguration ceremony of the US anti-missile station Aegis Ashore Romania (in the background) at the military base in Deveselu, Romania on May 12, 2016. The appalling corruption of European regimes across the continent is pushing the world to the nuclear abyss. © Daniel Mihailescu / AFP

He said that “NATO fend us off with vague statements that this is no threat to Russia … that the whole project began as a preventive measure against Iran’s nuclear program. Where is that program now? It doesn’t exist. … We have been saying since the early 2000s that we will have to react somehow to your moves to undermine international security. No one is listening to us.”

In other words, he is saying that the West is ignoring Russia’s words, and that therefore Russia will, if this continues, respond by eliminating the ABM sites before they become fully operational. To do otherwise than to eliminate any fully operational ABM system on or near Russia’s borders would be to leave the Russian people vulnerable to a blitz attack by NATO, and this will not be permitted.

He said: “At the moment the interceptor missiles installed have a range of 500 kilometers, soon this will go up to 1000 kilometers, and worse than that, they can be rearmed with 2400km-range offensive missiles even today, and it can be done by simply switching the software, so that even the Romanians themselves won’t know.”

In other words: Only the Americans, who have designed and control the ABM system, will be able to know if and when Russia is left totally vulnerable. Not even the Romanians will know; and Putin says, “Russia has ‘no choice’ but to target Romania” — and later Poland, if they follow through with their plans to do the same.

“Putin is saying that the West is ignoring Russia’s words, and that therefore Russia will, if this continues, respond by eliminating the ABM sites before they become fully operational…”

By implication, Putin is saying that, whereas he doesn’t need to strike Romania’s site immediately, he’ll need to do it soon enough to block the ABM system’s upgrade that will leave Russia vulnerable to attack and (because of the fully functional ABM) with no ability on Russia’s part to counter-strike.

He is saying: Remove the ABM system, or else we’ll have to do it by knocking it out ourselves.

Putin knows that according to the Article Five, “Mutual Defense,” provision of the NATO Treaty, any attack against a NATO member, such as Romania, is supposed to elicit an attack by all NATO members against the nation that is attacking. However, Putin is saying that, if NATO is going to be attacking Russia, then it will be without any fully operational ABM system, and (by implication) that Russia’s response to any such attack will be a full-scale nuclear attack against all NATO nations, and a nuclear war resulting which will destroy the planet by unleashing all the nuclear weaponry of both sides, NATO and Russia.

Putin is saying that either Romania — and subsequently Poland — will cancel and nullify their cooperation with U.S. President Obama’s ABM installation, or else there will be a surgical strike by Russia against such installation(s), even though that would likely produce a nuclear attack against Russia by NATO, and a counter-strike nuclear attack by Russia against NATO.

When Putin said “No one is listening to us” on the other side, the NATO side, Putin meant: I don’t want to have to speak by means of a surgical strike to eliminate a NATO ABM system, but that’s the way I’ll ‘speak’ if you are deaf to words and to reason and to common decency.

He will not allow the Russian people to become totally vulnerable to a nuclear attack by the United States and its military allies. He is determined that, if NATO attacks Russia, then it will be game-over for the entire world, not only for Russia.

He is saying to Obama and to all of NATO: Please hear and understand my words, and be reasonable, because the results otherwise will be far worse for everyone if you persist in continuing to ignore my words.

How Russia is preparing for WWIII

Unfortunately the US has made a reprisal military operation by Russia potentially a fact. Why has the US and its NATO puppets been so foolish as to install such a provocative weapon on Russia’s doorstep? Do they understand that they have reduced their national security by a 100%? They have you know. If I can see it than the seniour leaders of the NATO nations should be able to also.