[su_panel background=”#f5f7f7″ color=”#1d1919″ shadow=”7px 0px 1px #eeeeee” radius=”1″]Liberals and left-leaning individuals in the U.S. trust NPR more than any other news outlet. And, I certainly consume NPR news more than any other mainstream source, usually listening to it at least twice daily, though I abhor its coverage of international events. For these reasons, and with the reader’s forbearance, I have chosen to single NPR out to look at how we in the U.S. are collectively misled into ignoring or accepting our own government’s atrocities.[/su_panel] 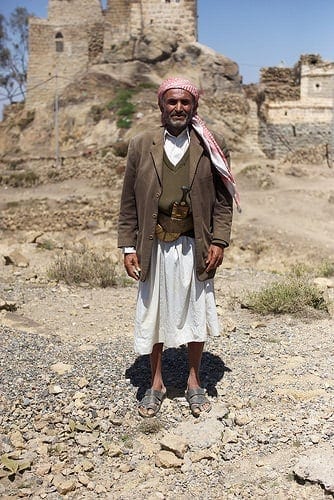 This week, NPR has had some significant segments on the world’s refugee crisis, the worst since World War II. While Syria is always mentioned in these segments and gets much mention on NPR in general, there is barely a mention of the refugee crisis emanating from Yemen.

And, this is a big omission, for as the International Displacement Monitoring Centre (IDMC) has recently reported, Yemen had more people displaced last year due to conflict than any other country on earth. Thus, 2.2 million people were displaced by the armed conflict in Yemen in 2015, a figure which accounts for over 25% of the 8.6 million people displaced around the globe due to conflict last year. In addition to Yemen’s refugee crisis, the IDMC also notes that over 14 million Yemenis are on the verge of starvation as a result of the current conflict.

Yet, the only discussion I have found that NPR gave to Yemen in the context of the world refugee crisis was one, solitary piece back on May 11, and that piece was very telling in what it refused to say about the causes for Yemen’s mass displacement problem.

Many times people become IDPs [internally displaced peoples] because their government is unable to protect them and keep them in their homes in the first place. At other times their government may have been actively involved in attacking them. The regime in Syria has been repeatedly accused of bombing its own people.

The greatest number of IDBs in a single country in 2015 was in Yemen, which is currently in the throes of conflict.

“The majority are not living in camps,” [Interim Director of IDMC, Alexandra] Bilak says. “There’s very little camp infrastructure in Yemen. The majority are living in overcrowded rented accommodations. Many have moved into schools and public spaces. Some are in tents or makeshift shelters. They’re exposed to harassment and gender-based violence. They’re suffering from food insecurity. Their children are no longer going to school.”

The foregoing piece, which seems to me to very typical of mainstream reporting, is quite interesting when broken down and analyzed. First of all, while we are told absolutely nothing about what the Yemen “conflict” is or who the players are there, we are told at least something about the Syrian conflict. Specifically, we are told that “[t]he regime in Syria has been repeatedly accused of bombing its own people.” This is, of course, true. But it is also true that Islamic terrorist groups in Syria are responsible for attacking and displacing their fair share of civilians, not to mention the U.S. which itself has bombed and killed hundreds of civilians in Syria, but there is no mention of such trifles in this NPR piece.

In addition, as is typical of most mainstream reporting, the government of Syria is referred to as a “regime.” Of course, we always refer to governments as “regimes” to suggest that they lack legitimacy and that they are somehow nefarious. Curiously, though, one will hear the Saudi government referred to as a “regime” with much less frequency than the Syrian government, despite the fact Saudi Arabia is governed by a repressive, unelected monarchy which, as many of us suspected all along, apparently bankrolled the 9/11 attacks against the U.S.

And, of course, it is the Saudi regime which is most responsible for the suffering and massive refugee crisis in Yemen. Again, one strains to hear of this fact, and this fact is indeed notably absent from the foregoing NPR piece which itself relies on the most recent IDMC report. However, the IDMC report, which quite correctly refers to Yemen as “an overlooked crisis,” makes it clear that “[t]he upsurge in violence [in Yemen] has largely been attributed to the Saudi-led military intervention in the conflict.” The same report also points out that the Saudi-led economic and humanitarian blockade of Yemen is the prime cause of the “sharp deterioration in living conditions” in Yemen. But, apparently, none of this is worth repeating.

Even less will one hear of the fact that it is the U.S. government (or, the U.S. regime if you will) that is playing a key role in arming and giving logistical and diplomatic support to Saudi Arabia in its slaughter, displacement and starving of Yemini civilians. This may explain why, in the words of the IDMC, Yemen’s conflict is indeed “overlooked,” for Western media outlets, such as NPR, are loath to give too much attention to U.S.-sponsored crimes.

To be clear, it is not that NPR and other media outlets never mention such inconvenient facts, they just do so rarely. So, for example, in the case of Yemen, I was able to find only six (6) occasions this year in which NPR had a segment talking about the link between the U.S. and the Saudi coalition assault on Yemen. This is compared to the coverage given to Syria, and in particular the human rights abuses of the Assad government, which is nearly a daily drum beat.

The result of this disproportionate news coverage is that the listener could very well miss out entirely on any discussion of such issues as U.S.-backed crimes in Yemen. And, even if one does hear a segment or two on this matter, this issue will be easily forgotten and certainly not taken as seriously or treated as urgently as the misdeeds of the U.S.’s ostensible enemies, such as Syria’s Assad government, to which NPR gives nearly obsessive attention.

In this way, we in the U.S., who may otherwise be moved to care about the fate of millions in Yemen whose lives are being upended with our own government’s complicity, are lulled into complacency, with our comfortable feeling about our nation’s inherent goodness fully intact. The result is that those in power in our ostensibly democratic government are given a free hand to aid and abet such atrocities as the near-total destruction of Yemen without the fear of any reprisal or opprobrium.

ABOUT THE AUTHOR
Daniel Kovalik lives in Pittsburgh and teaches International Human Rights Law at the University of Pittsburgh School of Law.

NATO to Increase Presence in Poland After Warsaw Summit – Stoltenberg