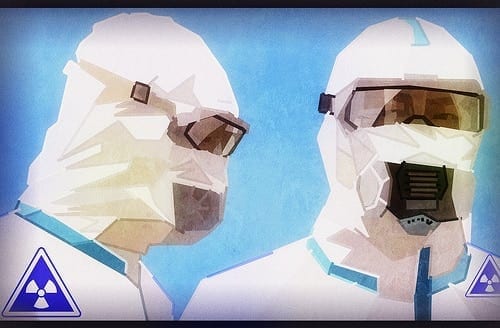 A Shadow On the Collective Consciousness

It has been a year since my annual nuclear-experimentation article. Time flies. My scale of time of course is ignorant. I cannot comprehend the complexity of time unfolding as it does, beyond my limited human imagination, and my ignorance of the ways of time is not unlike your own. And perhaps it is not unlike the ignorance of the nuclear goons of yesteryear, whose short-sighted planning for the nuclear waste ‘storage’ failed to take into account the life of nuclear radiation in human generations much less the millions of years that nuclear waste actually remains deadly.

Some people posit that one generation is roughly twenty years. So, about three generations ago the first nuclear waste was created and then buried, for future generations to deal with.

This month, as we begin Year 71 of the global nuclear experiment, the impermanence of the United States’ crumbling nuclear infrastructure is becoming blatantly apparent. Several nuclear sites are deteriorating, and there are increasing rates of illness around numerous nuclear sites in the USA and around the world — that we know of. But, as whole regions are suffering worsening nuclear conditions, we can only speculate about the total effect. We can only speculate about what we don’t know, and don’t actively measure.

Of course, what the human collective is capable of comprehending about its place in time is also a lot like the silliness of the sailors observing the sea; when it comes to our understanding of space, time and causality — and therefore our effect on future generations — we’re just scratching the surface. When we look further, at a deeper level, life is like an ocean, an ocean of energy the Buddhists call Mara, made up of energy and karma. Some folks wiser than myself noted that karma might happen immediately, what we know as instant karma, and karma also might act like a bullet with infinite potential energy for its velocity, and this energy or bullet might take off out to Saturn before ricocheting back to Earth only to hit the grandchild of the person that fired it. Karma, you just never know.

Below is a list of a few recent events of significance, that we know of — that we can see, as sailors on the sea of Mara.

Scientifically speaking, the risk cycle of nuclear power generation cannot be validated as “safe” until waste can be permanently removed, stored and degraded, and potential impacts to human and environmental health entirely mitigated. And we know that, today, that is simply not the case — despite the industry rhetoric. The nuclear-experimentation industry is still shrouded in scientific and political secrecy, undermining our liberties and democratic processes and risking our health and our very existence in the process. When it all goes wrong — and history shows us this outcome is inevitable — the environmental destruction both of nuclear accidents and planned detonations is global, and permanent.

Based on its track record it is apparent that the nuclear industry does not have the knowledge to properly assess and mitigate all the risks involved in their experiment — and it is an experiment — nor to safely manage the resulting nuclear waste for even 71 years of the one million years it takes to break down. How can utility companies, industry regulators and nuclear zeolots claim that an appropriate level of control is exercised on wastes that will be dangerously radioactive for tens of thousands of years? In reality, the storage cycle for weaponry and fuel-related nuclear waste is only beginning. We have reached year 71 of a million-year-long process. Our nuclear waste is a problem today, and is a mounting problem for countless generations yet to come.

And that’s just what we know about. With hindsight, it is undeniable that the nuclear industry obfuscates the truth. Spokespersons for GE, the corporation that built the faulty Fukushima reactors, describes nuclear energy as “the cleanest base-load power-generation system available today”, while news on the actual status of Fukushima (now 5 years on) is sketchy at best. The operators at Santa Susana laboratories didn’t advise those living downwind of the Santa Susana disaster that there might be something problematic in the air. Major fires went unreported, as did the 1959 meltdown. Only after a similar meltdown at Three Mile Island was the extent of the Santa Susana experiment finally revealed. (Source) And the recent near-miss at Miami never made the 6 o’clock news.

After many years of dedicated research and activism, I have realized that the nuclear experiment is among most important subjects left mostly unconsidered. Not only is the subject matter life-threatening beyond our comprehension, not only is it the result of the very military industrial complex President Eisenhower (the last military president to profoundly understood the military and government) publicly warned us about in 1961 — relegating the nuclear experimentation topic to the fringes of public focus and discussion casts a shadow on the collective consciousness.

But the cover-up is so great it exposes itself. Part of the cover-up, this grand shadow, is the minimizing of its importance. The discussion of nuclear experimentation has been made taboo, shrouded in false science and corporate agendas. But our unwillingness to confront the nuclear issue with any real seriousness exposes our civilization as being anything but civil. The nuclear experiment requires the light of our attention and care, but institutions of every variation — from the USA to North Korea, from the DOE to fisheries — all have reasons to casts a shadow on the collective consciousness and hinder genuine consideration of the effects of the nuclear experiment. They benefit from our silence and lack of attention to this matter of ultimate importance. And our radioactive karma is causing many of us to look the other way, as juveniles to consequences.

The only way for humanity to embrace truly clean-energy systems and overcome the threat of nuclear disaster is to wake up, get informed, and rise up. Let ignorance be the new taboo. Do not allow ostriches to pose as humans, their heads in the sand. As Year 71 of the Nuclear Experiment begins, and its trail of destruction becomes more apparent, we must continue to cast light on the shadows.

Ethan Indigo Smith: Activist, author and Tai Chi teacher Ethan Indigo Smith was born on a farm in Maine and lived in Manhattan for a number of years before migrating west to Mendocino, California. Guided by a keen sense of integrity and humanity, Ethan’s work is both deeply connected and extremely insightful, blending philosophy, politics, activism, spirituality, meditation and a unique sense of humor.

The events of September 11, 2001 inspired him to write his first book, The Complete Patriot’s Guide to Oligarchical Collectivism, an insightful exploration of history, philosophy and contemporary politics.

The US and the EU Support a Savage Dictator