The US and the EU Support a Savage Dictator 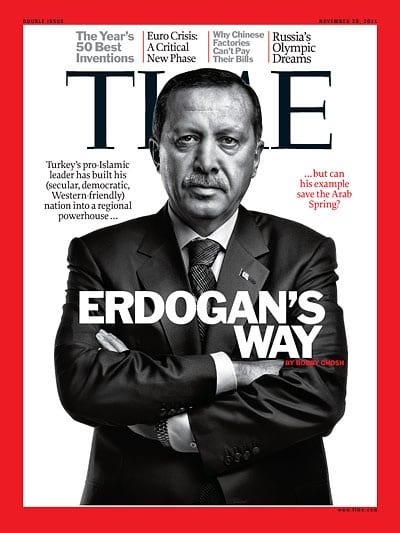 Erdogan, by nature a ruthless despot, is obviously Washington’s man for the Eastern flank of NATO. Lapdogs like these proliferate in the Empire of Chaos.

There are embedded contradictions in the enthusiastic support of Erdogan by the US and the EU. The US argument is that Erdogan is a staunch ally in the effort to bring down Assad and oppose Russia. Supposedly, he is also critical in the fight against the so0called Islamic State. However, Erdogan has been benefiting handsomely by the constant passage of ISIS oil tankers into Turkey and off-loading at Turkish ports. This is not some sporadic event that slips under the radar, this is a constant flow of a fleet of trucks. Given the blatant wink and nod to ISIS by Erdogan (and therefore the US, EU, and the rest of the “alliance”) are we suppose to pretend that the US is not also supporting ISIS in a host of ways – Erdogan’s gloved fist being just one example. The grotesque irony of holding the World Humanitarian Summit it Turkey speaks volumes about the woeful lack of a true humanitarian response to the ongoing displacement of millions of people across the Middle East … and Africa. Of course the US supports Erdogan for he is little more than the henchman in this plot. -rw

On May 6 a court in Istanbul, acting on the orders of Turkey’s President Recep Erdogan, sentenced the editor of the Cumhuriyet newspaper to five years and ten months in prison for publishing a report about illegal provision of weapons to Islamist terrorists in Syria by Turkey’s secret service. His bureau chief got five years.

Two weeks later Istanbul was host to the World Humanitarian Summit, which was held «to stand up for our common humanity and take action to prevent and reduce human suffering». Attendance included 65 heads of state. It was the usual total waste of time (Oxfam called it «an expensive talking shop» and those who refused to be there included President Putin and the global medical charity Médecins Sans Frontières), but the point is that a humanitarian conference should never have been held in Turkey, which is being transformed into a dictatorship by a president who is well-described by Professor Alan Sked of the London School of Economics as «a volatile, unstable, highly authoritarian personality».

The professor went on to observe that Erdogan «has pursued a civil war in his own country and has clamped down on the opposition and social media at will. Thousands have been imprisoned for merely criticising him. He has ordered the shooting down of a Russian warplane, and his country has been accused by Russia of trafficking secretly in oil with Isis. He cannot be trusted…»

Erdogan is a bigoted thug, yet the international community rushed to his country to hold a humanitarian conference and foreign heads of state flock to press his hand in friendship. He is treated with deference around the world and there can be no public criticism of him in the many countries that have laws prohibiting disparagement of heads of state and holding defamation and insult of their leaders to be a criminal offence punishable by imprisonment.

In January over 1,100 Turkish academics signed a letter asking Erdogan to cease his merciless blitz on Kurdish centres in the south east of the country. Thousands of Kurds had been (and continue to be) killed and crippled by ground and air assaults of merciless savagery. Erdogan’s response to the petition was to declare that these compassionate scholars «spit out hatred of our nation’s values and history on every occasion. The petition has made this clearer… In a state of law like Turkey, so-called academics who target the unity of our nation have no right to commit crimes. They don’t have immunity for this».

Some thirty of the humanitarian signatories were arrested and fifteen were dismissed from their university posts. They live under constant threat, as do all who attempt to disagree with the imperial president.

Yet Erdogan’s Turkey is strongly supported by the United States and by the European Union, albeit for very different reasons.

The US backs him because he supports Washington’s efforts to destroy President Assad of Syria and is a strident and aggressive opponent of Russia, while the EU is behind him because if he chose he could control the influx of Syrian refugees to Europe. So Erdogan can persecute and jail as many journalists and academics as he likes, while continuing to slaughter Kurds in Turkey, Syria and Iraq, and although there may be a few murmurs of disapproval in Brussels and Washington there will be no action whatever taken by either the US or the EU to stop the President of Turkey wielding absolute power over his people.

In March, while Erdogan was attending the 2016 Nuclear Security Summit in Washington (yet another total waste of time and money, except for the travel industry) he met separately with the US president and vice-president, neither of whom had the moral courage to take him to task for his blatant oppression of those of his citizens who dare to have ideas and opinions contrary to his own.

As the Voice of America reported on March 31, «President Barack Obama assured his Turkish counterpart of American commitment to the security of Turkey, a critical ally in the fight against the Islamic State group», while the White House “readout” of the Erdogan-Biden meeting recorded that «the Vice President reiterated the United States’ unwavering commitment to Turkey’s national security as a NATO Ally». They discussed «ways to further deepen our military cooperation» which was no doubt heartening to a bellicose thug whose aim is to persecute and preferably kill Kurds wherever they may be.

In spite of all the evidence, the United States refuses to acknowledge that Erdogan’s Turkey has sent massive quantities of weaponry to Islamic terrorist groups who are prepared to kill Kurds. It does not appear to matter to Washington that «Not only has Erdoğan done almost everything he can to cripple the forces actually fighting ISIS; there is considerable evidence that his government has been at least tacitly aiding ISIS itself».

The countries of the European Union, in similar blinkered mode, ignore Erdogan’s transformation of Turkey from democracy to dictatorship because they are prepared to make almost any sacrifice to reduce the flood of refugees now threatening their countries. Their leaders are terrified that behaving in a humanitarian manner will damage their domestic electoral chances and have set up an extraordinary deal with Erdogan who has agreed to «do more to prevent refugees from traveling to Europe via its territory and take back all migrants and refugees who manage to cross into Europe from Turkey … In return, the European Union has doubled the financial aid it promised Turkey from 3 billion to 6 billion euros, has agreed to take in more Syrian refugees from Turkey, and will move to provide visa-free travel to Turks and reopen EU accession talks».

Little wonder that Erdogan is on the crest of a wave and can persecute dissenters and slaughter Kurds with hardly a word of international criticism. In March, when he took over Turkey’s largest newspaper, the independent Zaman, and replaced the entire staff with his supporters, US State Department spokesman John Kirby called the seizure «troubling». And it was reported on 25 May that, «the EU wants Ankara to narrow its definition of terror to stop prosecuting academics and journalists for publishing ‘terror propaganda’, but Turkey has refused to do so».

Unless the US and the EU bring pressure to bear on Erdogan to restore democracy in his country, he will continue to suppress and persecute his critics and continue his killing spree. But he is too valuable to them for that to happen. All they will do is hold more humanitarian conferences.

The Case for Animal Rights

LIVE: Scott Ritter on What’s Next...