The End of M.A.D. — The Beginning of Madness

Crosspost with The Saker

John Helmer, who explains military-strategic matters better and more knowledgeably than just about anyone, headlined on May 30th, “The Red Line Crossed, In the Cross-Hairs, At Trigger Point”, and he opened:

First there was the red-line announcement. On Friday [May 27th] in Athens there was the cross-hairs statement. By the month of October, the month before the US presidential election, there will be the trigger point.

The US and the North Atlantic Treaty Organization (NATO) allies are going to war with Russia, accelerating the inevitability that Russia will strike in self-defence. This is what the first and second statements by President Vladimir Putin warn. There will be no statement of warning. 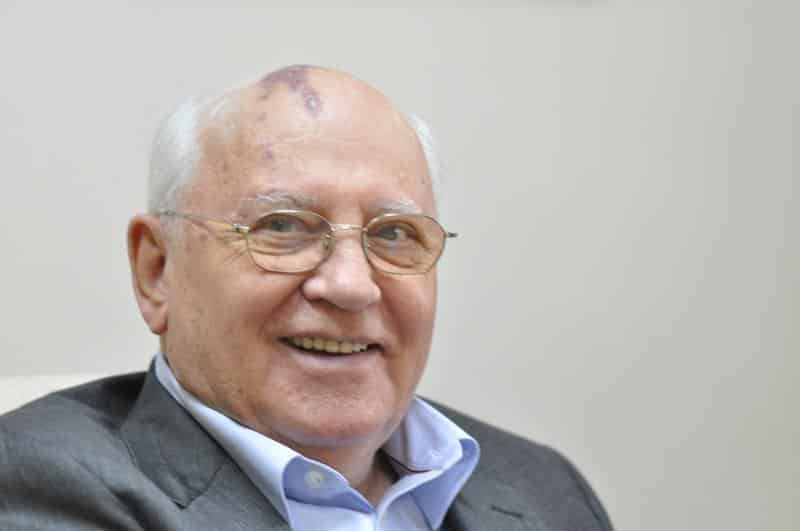 Gorbachev: Reviled by many in Russia and regarded as a Fifth Columnist, he probably fell like a fool for Washington’s shameless treachery and lack of honor.

News media in the West treat any such report — that Russia might be placed into a situation in which a blitz nuclear attack against the West would (and maybe even will) be Russia’s rational response to Western operations to surround Russia with hostile forces on its borders — as if there’s something kooky about any such opinion: they treat it as if the West weren’t ruled by people who are that evil, as if recognizing such evil in a ruler in the West is to be prohibited (especially if that ruler is America’s President, instead of, for example, Turkey’s President, whom apparently one is allowed to impute to be evil). On the present occasion, however, they should pay close attention to the situation Helmer describes, and they should report about the matter, while there might still be time enough to avert an unimaginable catastrophe, which (as Helmer explains in detail) could quite possibly happen this year.

The West is in stark reality-denial. Whereas the Cuban Missile Crisis in 1962, between JFK and Khrushchev, was accompanied by an appropriate public fear on both sides, the even more dangerous situation this time, between Putin and Obama, elicits such fear only among the Russian people, not at all among Americans and other Westerners.

Mutually Assured Destruction, or M.A.D., isn’t only a reality in a nuclearly armed multipolar world, but it is also, and equally importantly, also a mass-psychology, of belief that there cannot be any winner of a nuclear war — that (especially regarding a nuclear conflict between the two nuclear superpowers) any nuclear war will destroy the planet we all share. This sense of a shared fate on both sides, is central to M.A.D., as what it was — the foundation-stone of the post-world-war era, the era in which existed the longest extended period without a global war, since the advent of global war in 1914.

That era is, tragically, now over.

M.A.D. ended as a mass-psychology in the West, but not in the East — not in Russia, and not in any other of the world’s free nations, otherwise known as the independent nations (the nations that aren’t under the control of the U.S. aristocracy and of any of the aristocracies that are allied to that aristocracy — nor of any other foreign nation’s aristocracy), or also called the “BRICS” nations (which just recently lost its “B” when Brazil underwent a coup, which changed Brazil to becoming now a satellite of the U.S., which will probably (if nuclear war is averted) then be ‘rescued’ by IMF loans that will increasingly strip the Brazilian public and leave them with even lower living-standards and even deeper indebtedness, which will increasingly be owed to foreign lenders).

The West is in stark reality-denial. Whereas the Cuban Missile Crisis in 1962, between JFK and Khrushchev, was accompanied by an appropriate public fear on both sides, the even more dangerous situation this time, between Putin and Obama, elicits such fear only among the Russian people, not at all among Americans and other Westerners.

M.A.D. resulted from the balance that existed when America’s NATO alliance was counterbalanced by the USSR’s Warsaw Pact alliance. Therefore, the very idea of nuclear ‘conquest’, in a military sense, was simply assumed to be impractical, not only by the publics on both sides, but (at least as crucially) by the two opposed aristocracies, West versus East, U.S.-allied versus U.S.S.R.-allied. 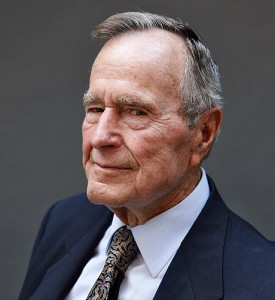 George HW Bush—the patriarch of the Bush mafia clan. The man is probably proud of his chicanery, and what he did for his class.

The end result of U.S. President George Herbert Walker Bush’s secret strategy, in 1990-1991, of terminating that M.A.D. by his regime’s lying so as to fool Gorbachev to terminate the USSR and its Warsaw Pact while Gorbachev (and then his successor Yeltsin) allowed continuation and even expansion of NATO, has become, in the West, a total lack of the near-hysteria of mutual fear of nuclear annihilation that had existed in both the West and the East during the Cold War, and its replacement now by a nonchalant West and an increasingly terrified East, as the West is making preparations for what the U.S. aristocracy seems increasingly to believe to be a previously unprecedented situation, in which the U.S. aristocracy and its allied stooge-aristocracies (in Europe, Japan, and Australia) can emerge as actual victors after a nuclear war.

The ‘libertarian’ or ‘neoliberal’ ideology, the ideology of ‘individualism’, which the aristocracy has systematically inculcated now into generations of people in the West, denigrates the government’s obligations to the public, and raises instead to the ideal, the belief in the rightness of ‘every man for himself’ and ‘we are not in this together’, because ‘the masses of lazy bums and stupid people should get nothing more than whatever they deserve’.

Thus, in the West, there is no hysteria, such as once existed, for everyone to build his/her own family bomb-shelter, even as the West now is tightening its nuclear noose around the Russians’ collective neck. Instead, that previous fear and sometimes even hysteria, has been replaced by a situation in which only some individuals (no one knows whom nor how many) from the West’s aristocracies, have purchased elaborate hardened underground luxurious bunkers, in preparation for their increasingly likely future existences in a presumed post nuclear-holocaust world, and meanwhile the Western masses are not at all outraged at their being left fully exposed with no bunkers at all; and, the reason they’re not, is that they believe that, as their country becomes ‘protected’ by a ballistic-missile-‘defense’ or BMD or ABM (anti-ballistic-missile) system against the ‘enemy’ (now just Russia), they’ve got no more need to worry about ’the enemy’.

The Reagan-era ‘Star Wars’ anti-ballistic missile defense dream for the American aristocracy, is now starting to be realized finally in an Obama-era Lockheed Martin “Aegis Ashore Missile Defense System” nightmare for the Russian people alone, as the putative imagined pathway towards global victory for America’s aristocracy is becoming installed in eastern Europe and other areas bordering on and close to Russia. The American and other Western publics are blithely unworried about it, because the aristocracy’s ‘news’ media have told them that this is ‘just a defensive measure against possible further Russian aggression’ (not a reach-for-global-conquest by America’s aristocracy, which it actually is).

This is one of the reasons why, from the standpoint of America’s rulers, it’s so vitally important for information about those luxurious bunkers to be circulated only in publications for the elite, such as FORBES. If the general public were to become increasingly aware that the few billionaires amongst them are making their own preparations for living in a possible post-nuclear-holocaust nation, then the uncomfortable questions would arise as to why the federal government is not assisting the general public to do likewise (or at least to live in some kind of bunker, such as did happen back in ‘the good old days’).

[dropcap]T[/dropcap]his is also the result of the ‘libertarian’ or ‘neoliberal’ ideology, the ideology of ‘individualism’, which the aristocracy has systematically inculcated now into generations of people in the West, which denigrates the government’s obligations to the public, and which raises instead to the ideal, the belief in the rightness of ‘every man for himself’ and ‘we are not in this together’, because ‘the masses of lazy bums and stupid people should get nothing more than whatever they deserve’. If, perhaps, a billionaire can afford to live ‘safely’ deep underground, then “more power to him,” according to this ideology, which proclaims that equality of rights is wrong, and that instead a person deserves to have no more rights than he or she has property, wealth, dollars — things to trade with other individuals who possess wealth. In the U.S., this transactional basis for individuals’ rights was the ideology of the Supreme Court in a series of decisions such as the 2010 Citizens United decision, that a person’s right to ‘free speech’ should be proportional to how much money he/she spends to buy it so as to persuade others to vote the way one wants them to vote, or to buy whatever else one wants them to buy.

This transactional concept of an individual’s rights is a protection of dollars, not really of people. It’s for (and in service to) an aristocracy, not a democracy. This Supreme Court has supported aristocracy, not democracy. And, since, after WW II, this has increasingly become the new ethos, not only in the United States but in all countries that take the U.S. to be the ideal, Western publics are not at all outraged at being left high-and-dry in the event that perhaps the new military-security system, which is replacing the shared safety of M.A.D., is replacing it with the competitive and non-shared safety of ’nuclear primacy’, and will end up leaving the public out in the cold nuclear winter in the enemy’s camp.

After all, in the totally competitive world, what’s won is taken, and what’s lost is given; and, ‘to the victor belong the spoils’. This might not necessarily be so in economics, but it certainly is so in the military; it even defines the military outlook — which, after all, is what we’re talking about here.

But another accurate term for it is: madness. However, it is a madness that has been sold, by Western aristocracies, to the publics in the West, which is the reason why the belief in M.A.D. is now gone from the West. The popular belief there now is: eat or else be eaten. And, what is to be eaten isn’t the aristocrats who are selling this poison; it’s ‘the enemy’. (Meanwhile, America and NATO can call thugs like this ‘friends’ and even “members of NATO” and still call themselves supporters of ‘democracy’, a term that’s now devoid of meaning in the West.) This is why Western publics don’t care about the fear that the Russian people feel concerning the installation of America’s anti-ballistic missile systems.

In the most fundamental sense, the concept that we are all in this together is gone, in the West. If it doesn’t exist in both the West and the ‘East’ (namely, in Russia, where it does exist), then a nuclear war is extremely likely, and the real question is: When will it be likeliest to happen?