“Anyone rising to presidential material in America isn’t fit for any public office. The prospect of Clinton or Trump succeeding Obama should scare everyone.”

On Thursday, touting her foreign policy record without explaining its lawlessness, Clinton delivered a 30-minute anti-Trump rant – a demagogic litany of misinformation and Big Lies, devoid of substance, more proof of the danger humanity faces if she succeeds Obama next year.

“I’m proud to run on my record,” she said. As first lady, US senator and secretary of state, she was and continues to be militantly pro-war. 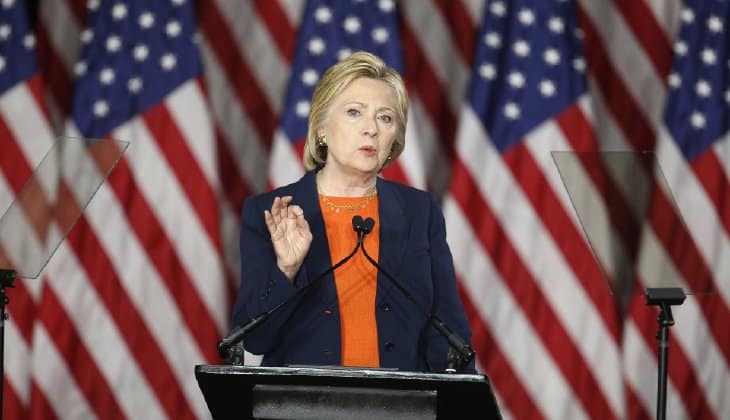 Clinton looks cogent and presidential when pitted against Trump, an incoherent, buffoonish megalomaniac, but that doesn’t cancel the central fact this woman is a sociopathic world class criminal and corporatist shill likely to plunge the world into constant wars, including a nuclear one.

In 1999, she urged husband Bill to bomb Belgrade, a flagrant violation of international and constitutional law. She lied about Slobodan Milosevic, saying “(y)ou cannot let this go on at the end of a century that has seen the major holocaust of our time. What do we have NATO for if not to defend our way of life?”

Her anti-Trump rant ignored her longstanding criminal record, including using the Clinton Foundation as a suspected criminal enterprise, masquerading as an NGO charity, vulnerable to racketeering charges.
…
The late Nobel laureate Harold Pinter called NATO’s aggression against Yugoslavia “barbaric (and despicable), another blatant and brutal assertion of US power, using NATO as its missile (to consolidate) American domination of Europe.” Lawless aggression became humanitarian intervention. An avenue to Eurasia was opened. A permanent US military presence was established. US imperialism claimed another trophy. Clinton’s public record shows the danger of her serving in high office.

SIDEBAR
NATIONALIST SYCOPHANT CLINTON’S ANTI-TRUMP RANT IS ALREADY BEING HAILED AS A GAME-CHANGER
Cogent, when compared to Trump’s incoherent, clownish and pathetic attempts at political oratory, but still riddled with self-serving lies and omissions, including an ominous level of invective against Russia and her leaders.

[dropcap]S[/dropcap]traightaway post-9/11, she urged waging war on terror, a pretext for US war on humanity, saying “I’ll stand behind (George) Bush for a long time to come.” She supports unlimited military spending, the tyrannical Patriot Act and other police state measures. She endorses cluster munitions and other illegal weapons, opposes banning land mines. She’s indifferent to human suffering, a monument to wrong over right, ideologically opposite what deserves popular support. Her public persona conceals her extremist views.
..
As first lady in the 1990s, she called Black youths “super predators (with) no conscience, no empathy.” She urged the FBI to make “a very concerted effort (to) bring them to heel.” She supported “deporter-in-chief” Obama’s anti-immigrant agenda – deporting undocumented Latinos in record numbers, separating husbands from wives, parents from children. She advocated racist “get tough on crime laws,” more police, more prisons, harsher sentences – an agenda directed at Blacks and Latinos “to keep them off the streets…for as long as it takes.”
..
She supports unrestricted nuclear cooperation with Israel and other US allies, flagrantly violating NPT provisions – endorsing the use of these super-weapons she calls peacekeeping deterrents. As US senator and presidential candidate twice, she was and remains one of the largest recipients of campaign contributions from Wall Street and war-profiteers. In the run-up to Bush’s 2003 Iraq war, she lied, saying “intelligence (sic) reports show that Saddam Hussein rebuilt his chemical and biological weapons stock, his missile delivery capability, and his nuclear program.”
…
“He has given aid, comfort, and sanctuary to terrorists, including Al Qaeda members…It is clear that if left unchecked, (he’ll) continue to increase his capacity to wage biological and chemical warfare, and will keep trying to develop nuclear weapons.”
…
At AIPAC’s 2008 convention, she said “(t)he United States stands with Israel now and forever,” claiming “our two nations are fighting a shared threat,” an invented one, she failed to explain. Then and now, she backs “massive retaliation” if Iran attacks Israel – as a 2008 presidential aspirant, saying I “want the Iranians to know that if I’m president, we will attack Iran.”
…
“In the next 10 years, during which they might foolishly consider launching an attack on Israel, we would be able to totally obliterate them.” She supports preemptive, unilateral use of nuclear weapons, including against non-nuclear states. She orchestrated the ouster of democratically elected Honduran President Manuel Zelaya, fascist tyranny replacing him. In 2010, her attempt to remove Ecuador’s Rafael Correa failed. In 2012, her dirty hands were involved in ousting Paraguay’s democratically elected President Fernando Lugo – what he called “a parliamentary coup against the will of the people.”
…
She orchestrated US-led NATO aggression on Libya, destroying Africa’s most developed country, transforming it into a failed state – an endless cauldron of violence, chaos and human misery. She notoriously celebrated Gaddafi’s sodomized murder, infamously saying “(w)e came. We saw. He died” – the rant of a lunatic eager to kill again. She conspired with Obama and other administration neocons to wage preemptive war on Syria, raging in its sixth year, responsible for the murder of around half a million, mostly civilians, and internally or externally displacing half the population.
…
In her Thursday address, she called America “an exceptional country.” Its sordid history shows otherwise. Her anti-Trump rant ignored her longstanding criminal record, including using the Clinton Foundation as a suspected criminal enterprise, masquerading as an NGO charity, vulnerable to racketeering charges.
…
Calling Trump “not just unprepared (but) temperamentally unfit” to hold high office ignores the danger of her finger on the nuclear trigger, the threat of WW III with her as president. Trump fired back, twittering “(c)rooked Hillary no longer has credibility – too much failure in office. People will not allow another four years of incompetence” – adding her performance was “terrible…pathetic.”
…
Anyone rising to presidential material in America isn’t fit for any public office. The prospect of Clinton or Trump succeeding Obama should scare everyone. Neocons infesting Washington exert enormous influence. Four more years of endless wars are certain. Humanity’s fate hangs in the balance.