Home COLUMNSFelicity Arbuthnot UK: The Iraq Inquiry, A Government U-Turn and an “Apology” from Tony Blair.

UK: The Iraq Inquiry, A Government U-Turn and an “Apology” from Tony Blair. 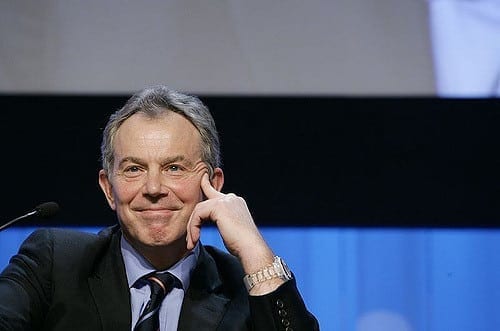 Tony Blair at the 2007 World Economic Forum in Davos.

If “a week is a long time in politics”, a quote attributed to British Prime Minister Harold Wilson (1964-1970 and 1974-1976) under David Cameron’s tenure – a man who has been kicked into myriad U-turns over feckless, reckless decisions  – a day is an age.

On 3rd June it was announced the summary of the long awaited Iraq Inquiry (Nov 24th 2009 to 2nd Feb 2011) Chaired by Sir John Chilcot is to be finally released on 6th July and to be given free to the families of the Iraq invasion’s 179 British victims. The summary costs £30, the hard copy of the full 2.6 million word Report a staggering £767. The families would have to foot the bill for the latter themselves.

The Inquiry has cost the British taxpayers £ ten million, with Sir John Chilcot during his various and complex work since, garnering £790 a day, also courtesy of the taxpayer.

As the Independent points out (3rd June 2016): “The process of drawing up the final Report has been beset by years of delays. The most recent substantial delay came during the so-called ‘Maxwellisation’ process where people criticised in the report are given an opportunity to respond.”

Whilst: ‘A spokesperson for the Inquiry said the free summary given to the families of the war’s British victims would be “substantial” ‘ (Independent, 3rd June) to those whose sons and daughters lives were sacrificed for a swathe of mistruths, mega-incompetence and alleged illegalities, only every word, line, chapter and verse of the Report will do.

Also, the summary would only go to immediate families, not relatives.

Yes, the Report will be on line, but for those wishing to study in depth, hard copies are vital. And what would it cost even in ink cartriges and paper to download twelve volumes? 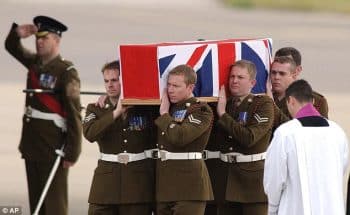 The bereaved families responded with fury, demanding that Tony Blair pay for their copies. For a man who has made up to to an estimated £ hundred million, the gesture of a mere £137,293 – the cost of 179 copies – to those who have given their children for his assertions of Saddam Hussein’s non-existent weapons of mass destruction which could strike the West in forty five minutes etc., would be a minimal price to pay. It would be small change in Blair-land.

“Within these volumes you will find all my justifications for involving our great country in the invasion of Iraq. I took the view, which I still passionately believe, as I said at the time on national television ‘it was the right thing to do’, morally and legally. In making you this gift of the Report I would like to say that I am truly sorry for your loss.

“Our great country is indebted through the sacrifice of your child who, by obeying orders and upholding my deeply held conviction that the Middle East would be a better place, which of course is the case. I also take the view that there was no need for any Inquiry or shameful pointing of fingers at myself or my government, intelligence agencies or military.

As my friend Madeleine Albright expressed so eloquently some years ago, there are times when the lives of the children of others are ‘a hard choice … but the price is worth it.’ As I said on television just prior to the invasion ‘I know I’m right.’ I still do. May my words be of some comfort to you in your grief.”

However, back to reality. Rose Gentle whose nineteen year old son Gordon was killed in Basra said of the denial of the full Report: “It’s disgusting …  Why should we have to pay – have we not paid enough times with the lives of our sons? The families should get a free copy of this, we have paid the cost with their deaths …” (The Guardian, 3rd June 2016.)

Roger Bacon, whose son Major Matthew Bacon was killed in 2005 said: “ … we have already paid with our children’s lives.”

Emily Thornberry, the Shadow Defence Secretary, stated that it was “grotesque and offensive” that families should be asked to pay to read the findings. Indeed.

“In respect of those who died in Iraq, they have suffered first the terrible loss of their loved ones, then the lengthy delay for an Inquiry to be launched, then the even lengthier delay for that report to be published. Do not now add insult to these already grievous injuries by making them pay to read that Report.” (1)

Liberal Democrat Leader, Tim Farron wrote to the MoD demanding they give free copies to bereaved families on request:

“It is unbelievable that after all these years of waiting, of stalling and uncertainty, we now find out that the families will have to pay for a copy of the Report … Families who have waited years, mother and fathers who have fought to have this Report see the light of day, should not have to pay for this … The government now needs to provide some form of closure to the victims of this illegal war.” (Emphasis added.)

By the end of the day on 3rd June, after the furore from cross party MPs, the families and the public, No 10 Downing Street put out a statement saying that there was: “ … no question of families of service personnel who died in Iraq having to pay for copies of the Chilcot Report”.

Yet in all this, no government, Ministry of Defence (MoD) or relevant official has mentioned the disabled, limbless, chronically ill, resultant from the invasion. They and their families are forgotten, invisible, not to even get the summary free. Reported casualties are 5,970, but the total figures have not been released by the MoD.

There are those who came back from this disaster built on a lie with no arms and no legs, brain damaged, others generally incapacitated by mega, but lesser limb loss and trauma.

“During the conflicts in both Iraq and Afghanistan, the British Ministry of Defence (MoD) has been reticent in publishing details of British casualties …” states Casualty Monitor (2) who also state: “… there are still serious problems with the accuracy and incompleteness of the information they release.”

In other words the MoD, to use Sir Robert Armstrong’s memorable quote to an Australian Court in 1986, is “economical with the truth.”

Moreover, numbers of Field Hospital admissions and the very seriously injured requiring Aero-medical evacuations were simply not available from the MoD during 2003, 2004 and 2005. See last chart at (2.)

In a further venture in to fantasy land, the probably two million Iraqi families bereaved between the embargo and the invasion surely deserve a copy – courtesy Mr “I know I’m right” Blair. 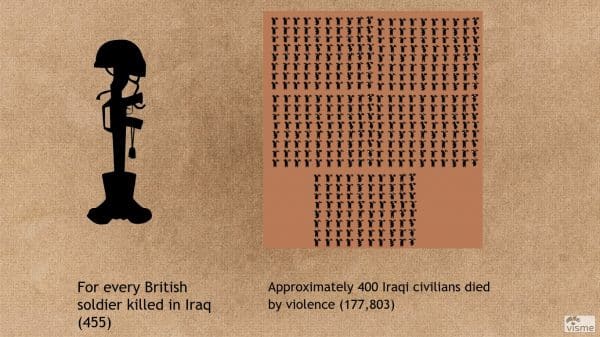 Rough depiction of British to Iraqi deaths. Note that estimated civilian deaths of 177,803 is considered a significant underestimate by many. (R Wolf)

Meanwhile in Iraq, Bush and Blair’s body count continues thirteen years and 5 weeks after “Mission accomplished”, declared on USS Abraham Lincoln, 1st May 2003, by George W. Bush. According to the United Nations at least 741 Iraqis, including more than 400 civilians, were killed and 1,374 wounded in April this year alone, due to the ongoing violence – a monthly nightmare which in pre-invasion Iraq was unthinkable.

However, back to the Iraq Report as an astute Facebook friend commented:

“To those looking forward to reading the Chilcot report, the one paid for by your taxes, I hope you have saved your pennies up. Classic British Government. You might have paid for it once but you have to pay for it a few more times before you can actually have it.”

Another commented: “Only Tony Blair will be able to afford it.”

With thanks to writer Lesley Docksey for inspired angle for Tony Blair’s “apology.”

If you appreciate our articles, do the right thing and let us know by subscribing. It’s free and it implies no obligation to you—ever. We just want to have a way to reach our most loyal readers on important occasions when their input is necessary. In return you get our email newsletter compiling the best of The Greanville Post several times a week.
[email-subscribers namefield=”YES” desc=”” group=”Public”]
Make sure many more people see this. It's literally a matter of life an death. Imperial lies kill! Share widely.
Chilcot inquiryTony Blair
0
FacebookTwitterPinterestRedditEmail
previous post

Israel has played a key role in US...

US Announces Three New Bases in Iraq After...

U.S. posture in the Middle-East: Preparing for disaster

This report, to my understanding will not apportion blame. That was not its mandate (why it was not its mandate is not mentioned). however it could serve as a platform to send Blair to the Hague. Once he is there it will increase the pressure on the US government to either send Bush and Cheney there also or disavow the international laws on war crimes. Either way, US gross hypocrisy will be front and centre, where it will prove the degeneracy for once and all of American society!