Home ANNOTATED NEWS Brexit, the Crisis of Capitalism, and Immigration

Brexit, the Crisis of Capitalism, and Immigration

Special to The Greanville Post | Commentary No. 46: “Brexit, the Crisis of Capitalism, and Immigration” 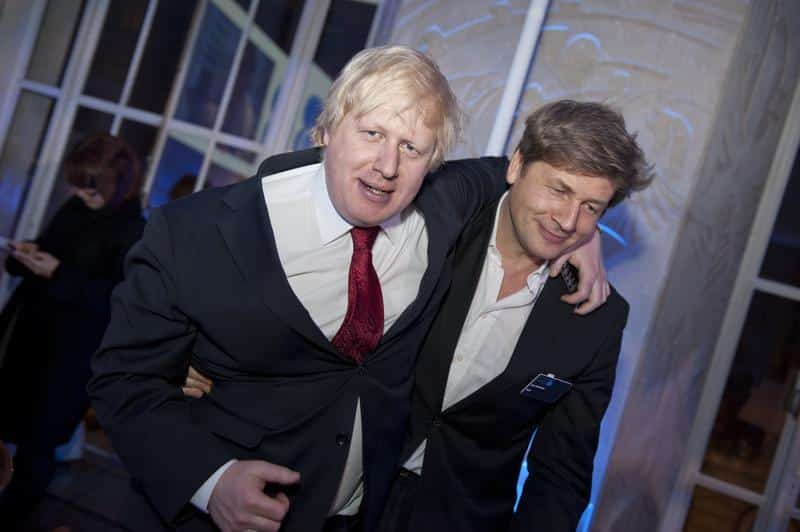 Boris Johnson with brother Leo: His “spontaneity” and frank outbursts have become an “endearing trait” to many Britons.

The first great industrial capitalist power in the world was of course England.  It was transformed in 1707 into what we know now as the United Kingdom of England, Wales, Scotland, and Northern Ireland (added in the 1920s following the conclusion of the Irish Civil War).

Following the Brexit, the UK may well be on its way back to being England-plus, for Scotland is very likely now to declare its independence and apply for membership in the EU.  The industrial revolution formed the material basis for the establishment of manufacturing capitalism (as distinct from its predecessor, mercantile capitalism). The industrial revolution, followed closely by the development of manufacturing capitalism, began in the UK in the 18th century.  They jointly spread to the major countries of Europe and the United States in the 19th century.

Capitalism has two major goals: to produce profits for the capitalists (owners) from the trading and manufacturing processes as well as enabling them to accumulate additional amounts of capital.  To do this, the capitalists employ workers who by their work add value to the plant, equipment, and raw materials supplied by the capitalists.  The profits and additional capital come from the value added (known in Marxist terms as “surplus value”) by the workers which are not returned to them in the form of wages and benefits.   Throughout the history of capitalism, the owners and the workers have been in a constant struggle over the share of the surplus value produced by the workers that actually goes back to them.  In Marxist terms, that conflict forms part of what is known as “class struggle” (the other part being over the control of the governmental apparatus that Lenin defined as “the state”).

[dropcap]B[/dropcap]eginning in the 19th century, in the industrialized countries, workers began organizing themselves  politically (political parties) and economically (trade unions) to gain a larger share, over time, of the surplus value that their labor produced, as well as some level  of control over the organs of state power.  It happens, when one looks back at the history of the 20th century (excluding the period of the two World Wars but including the period of the Cold War — otherwise known as the last 47 years of The 75 Years War Against the Soviet Union), that the periods of time in the several major capitalist countries of Western Europe and North America in which at least some workers got at least some reasonable share of the surplus value they produced corresponded with, varying from country to country, their political and economic strength.

But with certain exceptions here and there, capitalists have never been much on sharing.  And so, beginning, for example, in the United States with the passage of the Taft-Hartley Act in 1947, and in Great Britain with the advent to power of Margaret Thatcher and her wing of the Conservative Party, capitalists generally have been on a campaign to destroy/undermine to the extent possible the power of their respective trade union movements and of their pro-labor political parties.  In most of the major capitalist countries, especially due to the corruption of labor, the pervasive disorientation of the population, and the capitalists’ overwhelming command of the media, the foremost machinery of ideological penetration, this campaign has been hugely successful.

[dropcap]A[/dropcap]t the structural level, a major strategy utilized by capital has been the export of capital and with it the export of jobs to low-wage countries.  (Of course this strategy has been used in the United States, within the country, as when in the early 20th century textile manufacturers, led in part by distant relatives of mine, moved their factories from New England to the U.S. South, in order to get away from the growing Northern trade union movement.)  In the late 20th century job-export process has of course been accelerated in the United States by the various trade deals developed and negotiated by both wings of the US political Duopoly.  It should be noted here that free trade does not necessarily mean the free export of capital and with it the export of jobs.  A nation like Germany can have relatively free trade without engaging in the uncontrolled export of capital.  These developments have been very noticeable in the education of working class employment opportunities with reasonable wages and benefits in the “developed” countries.  Not so noticeable have been the in-roads in employment made by computerization, automation, and robotization (CAB).  All of these developments have led to an increasing concentration of wealth.   For, for example, as capitalists are not much on sharing the benefits of CAB, they have only led to the further decline of “well-paying jobs.”  Which, as is well-known, has led to much unhappiness among the working classes of the leading capitalist countries (other than Germany [at least so far] which does things differently).

And so, this is where “immigration” and the rise of the Far Right in a number of capitalist countries come in.  As capitalism, national and international, turned more and more to the financial sector for the production of profits (as predicted by Lenin almost 100 years previously), it eventually produced the Great Crash of 2008.  For the most part, Europe has not yet recovered from it, relying on what the European ruling class, operating through the European Union, calls “austerity” (for the workers, not themselves, of course).  The U.S. has to some degree been able to recover, in large part due to the fiscal stimulus created by the Federal Reserve Bank.

Nevertheless, there are large numbers of unemployed or poorly employed white workers in the United States who are understandably very unhappy.  Since there has never been a labor party in the U.S. to explain the real causes of the workers’ difficulties to them (and certainly the Democratic Party sector of the Duopoly has not done so either), they are left easy prey to those who would convince them that it is “the others’” fault.  Donald Trump is of course the worst of these, but the Republicans have been following their anti-immigrant line on and off since their founding in the 1850s, which was helped along by the anti-immigrant (the Irish in those days) Know-Nothing (“American”) Party.  As is well-known, the same factors have led to the rise of the Far Right anti-immigrant parties in Europe, and the UK.

But now the chickens are coming home to roost for the international capitalist class.  And so, Brexit.  There are a variety of reasons why many English workers voted to leave, but primary among them, just as in the U.S., is the “immigrant threat.”  One of the leaders of that movement is Great Britain’s very own Donald Trump equivalent, the equally rightist and equally unqualified Boris Johnson, screaming about the dangers of immigrants.  The “immigrant threat” is very useful to the rulers of all the capitalist countries as a major distraction from the major reasons why bad things are happening economically.  Very useful, that is, until it isn’t.  The Brexit referendum came into being because in the most recent national election the Conservative British Prime Minister, David Cameron decided to throw a bone to both the “anti-Euros” in his own party and the growing rightist United Kingdom Independence Party, and promise that there would be one.  He apparently never contemplated the chance that the “stay” side might lose.

Brexit is going to have an enormous negative impact on the international capitalist ruling class, not just in the United Kingdom.  There are a variety of reasons why Brexit succeeded.  But at the center of them are the anti-immigrant prejudices, which provide, as noted, such a handy distraction from the real problems.  Yes indeed, they were (and are) such a handy distraction for the capitalists, until their use in real time, in the birthplace of modern industrial capitalism, may well just accelerate the further decline of an economic system that is already steadily going downhill.

A Blow for Peace and Democracy: Why the British Said No to Europe