Home AMERICAN DUPLICITY The Chilcot verdict on Iraq: A war crime by British and US imperialism

The Chilcot verdict on Iraq: A war crime by British and US imperialism

By Julie Hyland
“The verdict should be clear enough: Blair, Bush, et al are war criminals. They, along with their co-conspirators, should face immediate trial…” 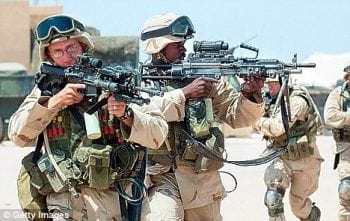 US troopers in Iraq. Clueless tools of empire. When they do learn what it’s all about, the damage is done. Source : dailymail.co.uk

The report of the Chilcot inquiry into the role of the British government in the 2003 US-led invasion of Iraq, released Wednesday, provides devastating confirmation of the illegal character of the war and the criminal role of those officials, both British and American, who organized and led it. 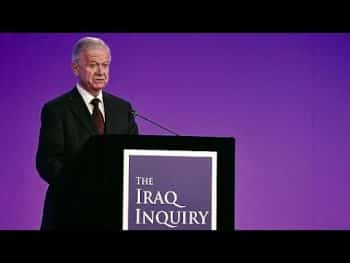 The conclusions of the investigation headed by Sir John Chilcot were issued seven years after the inquiry was first convened. The 2.6 million-word, 13-volume report covers the policy decisions made by the British government, military and intelligence services between 2001 and 2009. The inquiry has no legal powers, and any finding on the legality of the invasion was specifically ruled out by the Labour government of Gordon Brown that established it.

Nonetheless, the report provides conclusive proof that those responsible for the war have the blood of hundreds of thousands, if not millions, on their hands.

This applies not only to then-Labour Prime Minister Tony Blair, who functioned in Britain as liar-in-chief for the invasion and, as such, features heavily in the report. By extension, it is also an indictment of the principal architects of the war in the United States: former President George W. Bush, Vice President Dick Cheney, Defence Secretary Donald Rumsfeld and others, as well as all those leading officials who supported it, including the Democratic Party’s current presumptive presidential candidate Hillary Clinton.

Personal testimony, confidential documents and private memos confirm that Blair opted to support a US-war against Iraq that was prepared at least from the start of 2002, all while publicly claiming that there were no such plans.

The invasion that began on March 20, 2003 took place before “peaceful options for disarmament” had been exhausted, Chilcot notes. Damningly, he states, “Military action at that time was not a last resort.”

Iraq’s Saddam Hussein did not present an “imminent” threat at the time, and claims that Iraq possessed weapons of mass destruction were “not justified.” The invasion was launched on the basis of “flawed” intelligence assessments that were not challenged when they should have been, Chilcot states.

These facts in and of themselves demonstrate that the invasion was a brazen violation of international law. But the reality is far more incriminating.

The Chilcot report includes a declassified version of the so-called Downing Street Memo, memorializing a July 2002 meeting between Blair and other top officials in which the head of British intelligence explicitly acknowledged that “Bush wanted to remove Saddam, through military action, justified by the conjunction of terrorism and WMD. But the intelligence and facts were being fixed around the policy.”

In other words, a false pretext was being manufactured to justify an unprovoked war, and they all knew it.

The legal case for UK military action was “far from satisfactory,” Chilcot states. Moreover, while Blair was attacking France for failing to support a second United Nations Security Council resolution authorising military action, “we [the inquiry] consider that the UK was, in fact, undermining the Security Council’s authority.”

The report finds that the invasion failed in its stated objectives. It notes, “The risks of internal strife in Iraq, active Iranian pursuit of its interests, regional instability, and al-Qaida activity in Iraq were each explicitly identified before the invasion.”

Not only were 176 British soldiers killed (along with 4,491 US troops) and many thousands horribly wounded, “The people of Iraq have suffered greatly.” According to the most reliable estimates, the number of Iraqi lives lost as a result of the war stands at roughly 1 million. An estimated 5 million more people were driven from their homes. The country remains embroiled in bloody sectarian conflict and extreme economic and social hardship.

Of all those arraigned before the International Criminal Court Hague over recent years, such as Ivory Coast President Laurent Gbagbo and Sudanese President Omar al-Bashir, none are responsible for even a fraction of the deaths caused by Blair and Bush.

The Chilcot inquiry is an indictment of the policy pursued by US and British imperialism over the past 15 years. Its genocidal dimensions are made apparent from the catastrophes inflicted on Afghanistan, Iraq, Libya and Syria, which have served only to strengthen sectarianism and Islamic fundamentalism.

THE IDEA DISSEMINATED BY THE MEDIA THAT BUSH AND BLAIR ARE ONLY GUILTY OF HAVING MADE SOME “MISTAKES” IS GLARINGLY MISLEADING:  “Bush wanted to remove Saddam, through military action, justified by the conjunction of terrorism and WMD. But the intelligence and facts were being fixed around the policy.”

The verdict should be clear enough: Blair, Bush, et al are war criminals. They, along with their co-conspirators, should face immediate trial.

[dropcap]T[/dropcap]he Nuremberg Trials convened following the Second World War were clear and unequivocal in their principal conclusion: the use of war to achieve political ends that cannot be justified by imminent threat of attack constitutes the most heinous of war crimes. Bush and Blair are as culpable as the 12 Nazi defendants sentenced to death by hanging.

The Chilcot findings include previously secret memos from Blair to Bush (those sent from Bush to Blair were kept secret at Washington’s request) that make clear that the real motive behind the war was not the threat of weapons of mass destruction or terrorism, but, as was the case with the leaders of the Third Reich, global domination. Within days of the invasion, Blair exulted in the act of military aggression, declaring it a chance to establish “the true post-Cold War world order.” 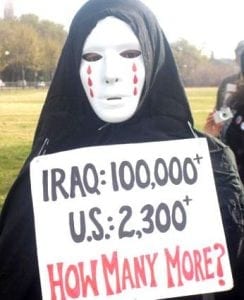 This image shows misleadingly low figures for all sides in the conflict. Many observers put the Iraqi victims of war at one million and counting. The Americans alone may have lost 4,000 soldiers. Source : instablogs.com

The reactions of many of the families of British soldiers killed in the Iraq conflict bear repeating. Sarah O’Connor, whose brother Bob died in Iraq in 2005, said, “There is one terrorist in this world that the world needs to be aware of, and his name is Tony Blair, the world’s worst terrorist.”

Roger Bacon, whose son Matthew was killed in Basra, said, “Never again must so many mistakes be allowed to sacrifice British lives and lead to the destruction of a country for no positive end.”

Mark Thompson, father of Kevin, killed in 2007, said Blair “should be stripped of everything he has for what he’s done. It was an illegal war. My son died in vain. He died for no reason.”

Blair knew “he was manufacturing and massaging” intelligence, said Reg Keys, whose son Thomas was killed, while Eddie Hancock, whose son Jamie also died, called for Blair to “be banned from any form of public office for life, at the very least.”

Such honest and heartfelt statements stand in stark contrast to the response of the powers-that-be, who are trying to conceal the implications of the inquiry and turn it into a framework for waging more efficient wars in the future.

Prime Minister David Cameron claimed that, whatever the consequences of Iraq, it is “wrong to conclude that intervention is always wrong.”

Labour Party leader Jeremy Corbyn was the most craven apologist of all. Lamenting the “disastrous decision” to invade Iraq, he said it had left a “stain” on the Labour Party. Not so much of a stain, however, that Corbyn felt obliged to even mention Blair’s name, let alone moot his expulsion from the Labour Party.

This cleared the path for Blair’s arrogant and belligerent response to the report, in which he sought not only to defend past crimes, but to justify new ones. “The world was and is, in my judgment, a better place without Saddam Hussein,” he said.

In a statement issued from his Texas ranch, ex-US President George W. Bush echoed Blair’s remarks, declaring that “the whole world is better off without Saddam Hussein.”

What these murderous sociopaths are saying is that the “world is better off” without the 1 million people annihilated by their war.

The response to the inquiry’s findings by not only Bush and Blair, but the entire political establishment on both sides of the Atlantic, makes plain that the fight for truth and justice–and compensation for the Iraqi people–can proceed only in struggle against the capitalist ruling class.

The Chilcot report has been released against the backdrop of an escalation of imperialist militarism, not only in the Middle East, but increasingly against Russia and China as well. The preparations for a Third World War have advanced rapidly during the seven years of the commission’s deliberations.

The lessons of this investigation [demonstrate once again] that “The struggle against war must be based on the working class, the great revolutionary force in society, uniting behind it all progressive elements in the population.”

ABOUT THE AUTHOR
Julie Hyland is a senior political commentator with wsws.org.
[printfriendly]

Michael Cimino, director of The Deer Hunter and Heaven’s Gate, dead at 77