Home PALESTINIANSGaza From Nice to the Middle East: The Only Way to Challenge ISIS 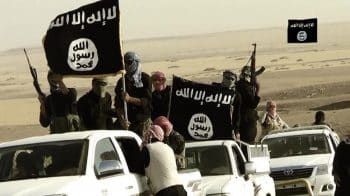 Editor's Note
Knowingly and intentionally or not, the United States has created a self-perpetuating "terrorism" machine. This goes beyond the issues of blowback to the issue of cause and effect. By responding to the deadly events of 9/11/2001 with a massive invasion of Afghanistan, the U.S. essentially created the "monster" it now attempts to slay. It is similar to the effect of pouring water on a grease or oil fire. The action does not put the fire out, but depending on the force with which one hits the grease, spreads it far and wide. In declaring full out, Daisy Cutter, MOAB, Bunker Buster war on Afghanistan, it took the brush fire of al Qaeda and blew it from a localized group to a global organization. Then, by repeating the same "strategy" over and over again it increased non-state terrorist activity by magnitudes with each stride.

What we are seeing here is, in part, a cultural behavioral failure. In U.S. dominant culture there is a strong propensity to respond to "bad" behavior in an aggressive manner. With each step in the "discipline" process, the measures get harsher and more aggressive, the controls tighter and tighter, the possibility of choice on the part of the miscreant fewer and fewer. This process can be seen in action from reaction to children's misbehavior, to gang issues, until they declare full on war on crime, drugs, terrorism, etc. The fact that there is an absolute refusal to step back and OBJECTIVELY evaluate the situation, the studies repeatedly show things getting worse - or they are reported as such regardless of what the studies show. I would argue that this shortcoming is not just a cultural failure, but reflects a deeply ingrained system of male dominance where power and force with total submission is the only (culturally) appropriate response. The fact that the United States as a whole sees itself as beyond such "barbarity" as male dominance, is just another component of a culture which eschews self reflection as effete (except for miscreants and females), for "real" leaders see the problem and act promptly, assertively, and with finality. What is overlooked, is that those being responded to in this manner may very well strike back. - Rowan Wolf

From Nice to the Middle East

I visited Iraq in 1999. At the time, there were no so-called ‘jihadis’ espousing the principles of ‘jihadism’, whatever the interpretation may be. On the outskirts of Baghdad was a military training camp, not for ‘al-Qaeda’, but for ‘Mojahedin-e-Khalq’, an Iranian militant exile group that worked, with foreign funding and arms, to overthrow the Iranian Republic.

At the time, the late Iraqi President, Saddam Hussein, used the exiled organization to settle scores with his rivals in Tehran, just as they, too, espoused anti-Iraqi government militias to achieve the exact same purpose.

Iraq was hardly peaceful then. But most of the bombs that exploded in that country were American. In fact, when Iraqis spoke of ‘terrorism’, they only referred to ‘Al-Irhab al-Amriki’ – American terrorism.

Suicide bombings were hardly a daily occurrence; in fact, never an occurrence at all, anywhere in Iraq. As soon as the US invaded Afghanistan in 2001 followed by Iraq in 2003, all hell broke loose.

The 25 years prior to 2008 witnessed 1,840 suicide attacks, according to data compiled by US government experts and cited in the ‘Washington Post’. Of all these attacks, 86 percent occurred post-US invasions of Afghanistan and Iraq. In fact, between 2001 and the publishing of the data in 2008, 920 suicide bombings took place in Iraq and 260 in Afghanistan.

A fuller picture emerged in 2010, with the publishing of more commanding and detailed research conducted by the University of Chicago’s Project on Security and Terrorism.

“More than 95 percent of all suicide attacks are in response to foreign occupation,” it emerged.

When I visited Iraq in 1999, ‘al-Qaeda’ was merely a name on the Iraqi TV news, referring to a group of militants that operated mostly in Afghanistan. It was first established to unite Arab fighters against the Soviet presence in that country, and they were largely overlooked as a global security threat at the time.

It was years after the Soviets left Afghanistan in 1988, that ‘al-Qaeda’ became a global phenomenon. After the September 11, 2001 attacks, the US’ misguided responses – invading and destroying countries – created the very haven that have espoused today’s militancy and terror.

In no time, following the US invasion of Iraq, ‘al-Qaeda’ extended its dark shadows over a country that was already overwhelmed with a death toll that surpassed hundreds of thousands.

It is hardly difficult to follow the thread of ISIS’ formation, the deadliest of all such groups that mostly originated from ‘al-Qaeda’ in Iraq, itself wrought by the US invasion.

It was born from the unity of various militants groups in October 2006, when ‘al-Qaeda’ in Mesopotamia joined ranks with ‘Mujahedeen Shura Council in Iraq’, ‘Jund al-Sahhaba’ and the ‘Islamic State of Iraq’ (ISI).

ISIS, or ‘Daesh’ has been in existence since then, in various forms and capacities, but only jumped to the scene as a horrifically violent organization with territorial ambitions when a Syrian uprising turned into a deadly platform for regional rivalries. What existed as a ‘state’ at a virtual, cerebral level had, in fact, morphed into a ‘state’ of actual landmass, oil fields and martial law.

It is easy – perhaps, convenient – to forget all of this. Connecting the proverbial dots can be costly for some, for it will unravel a trajectory of violence that is rooted in foreign intervention. For many western commentators and politicians it is much easier – let alone safer – to discuss ISIS within impractical contexts, for example, Islam, than to take moral responsibility.

I pity those researchers who spent years examining the thesis of ISIS as a religious theology or ISIS and the apocalypse. Talk about missing the forest for the trees. What good did that bring about, anyway?

American military and political interventions have always been accompanied by attempting to also intervene in school curricula of invaded countries. The war on Afghanistan was also joined with a war on its ‘madrasas’ and unruly ‘ulemas’. None of this helped. If anything, it backfired, for it compounded the feeling of threat and sense of victimization among tens of millions of Muslims all around the world.

ISIS is but a name that can be rebranded without notice into something entirely different. Their tactics, too, can change, based on time and circumstances.  Their followers can mete out violence using a suicide belt, a car laden with explosives, a knife even, or a truck moving at high speed.

What truly matters is that ISIS has grown into a phenomenon, an idea that is not even confined to a single group and requires no official membership, transfer of funds or weapons.

This is no ordinary fact, but in a more sensible approach should represent the crux of the fight against ISIS.

When a French-Tunisian truck driver rammed into a crowd of celebrating people in the streets of Nice, the French police moved quickly to find connections between him and ISIS, or any other militant group. No clues were immediately revealed, yet, strangely, President François Hollande was quick to declare his intentions to respond militarily.

Such inanity and short-sightedness.  What good did France’s military adventurism achieve in recent years? Libya has turned into an oasis of chaos – where ISIS now control entire towns. Iraq and Syria remain places for unmitigated violence.

What about Mali? Maybe the French had better luck there.

Writing for ‘Al Jazeera’, Pape Samba Kane described the terrible reality that Mali has become following the French intervention in January 2003. Their so-called ‘Operation Serval’ turned into ‘Operation Barkhane’ and neither did Mali became a peaceful place nor did French forces leave the country.

The French, according to Kane are now Occupiers, not liberators, and according to all rationale data – like the ones highlighted above – we all know what foreign occupation does.

“The question that Malians have to ask themselves is”, Kane wrote: “Do they prefer having to fight against jihadists for a long time, or having their sovereignty challenged and their territory occupied or partitioned by an ancient colonialist state in order to satisfy a group allied with the colonial power?”

Yet the French, like the Americans, the British and others, continue to evade this obvious reality at their own peril. By refusing to accept the fact that ISIS is only a component of a much larger and disturbing course of violence that is rooted in foreign intervention, is to allow violence everywhere to perpetuate.

Defeating ISIS requires that we also confront and defeat the thinking that led to its inception: to defeat the logic of the George W. Bushes, Tony Blairs and John Howards of this world.

No matter how violent ISIS members or supporters are, it is ultimately a group of angry, alienated, radicalized young men seeking to alter their desperate situation by carrying out despicable acts of vengeance, even if it means ending their lives in the process.

Bombing ISIS camps may destroy some of their military facilities but it will not eradicate the very idea that allowed them to recruit thousands of young men all over the world.

They are the product of violent thinking that was spawned, not only in the Middle East but, initially, in various western capitals.

ISIS will fizzle out and die when its leaders lose their appeal and ability to recruit young men seeking answers and revenge.

The war option has, thus far, proved the least affective. ISIS will remain and metamorphose if necessary, as long as war remains on the agenda. To end ISIS, we must end war and foreign occupations.

It is as simple as that.

A panicked Empire tries to make Russia an...

A panicked Empire tries to make...