Home PALESTINIANS Divide and Rule: How Factionalism in Palestine Is Killing Prospect for Freedom 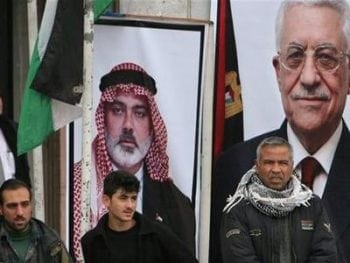 [su_dropcap size=”5″]A[/su_dropcap]s Palestinians in the Occupied Territories begin preparations for local elections which are scheduled for next October, division and factionalism are rearing their ugly head.

What is conveniently overlooked by all sides is that the performance of Palestinian municipalities is almost entirely irrelevant in the greater scheme of things.

In the West Bank, local councils are governed by strict Israeli-PA arrangement. Aside from very few chores, village and town councils cannot operate without a green light: an endorsement from the Palestinian Authority itself conditioned on a nod from the Israeli Occupation authorities.

This applies to almost everything: from basic services, to construction permits to digging of wells. All such decisions are predicated upon political stipulation and donors’ money, which are also politically-motivated.

Blaming a local mayor of a tiny West Bank village that is surrounded by Israeli military walls, trenches and watchtowers, and is attacked daily by armed Jewish settlers, for failing to make a noticeable difference in the lives of the villagers is as ridiculous as it sounds.

The local elections, however, are also politically and factionally-driven. Fatah, which controls the PA, is buying time and vying for relevance. No longer having a major role in leading the Palestinians in their quest for freedom, Fatah constantly invents ways to proclaim itself as a relevant force. It can only do so, however, with Israeli permission, donor money and US-Western political backing and validation.

Hamas, which might endorse selected candidates but is unlikely to participate in the elections directly, is also embattled. It is under a strict siege in Gaza and its regional politicking proved costly and unreliable. While it is not as corrupt – at least, financially – as Fatah, it is often accused of asserting its power in Gaza through the use of political favoritism.

While one must insist on national unity, it is difficult to imagine a successful union between both groups without a fundamental change in the structure of these parties and overall political outlook.

In Palestine, factions perceive democracy to be a form of control, power and hegemony, not a social contract aimed at fostering dialogue and defusing conflict.

Thus, it is no wonder that supporters of two Fatah factions, one loyal to PA President, Mahmoud Abbas, and another to Mohammed Dahlan, recently clashed in Gaza. Several were hospitalized after sustaining injuries.

Of course, a main case in point remains the civil war of 2007, a year or so after Hamas won parliamentary elections. The Fatah-Hamas political culture failed to understand that the losing party must concede and serve in the opposition, and the victorious party cannot assume the vote as a mandate for factional domination.

Other factors contributed to the Palestinian divide. The US, at the behest of Israel, wanted to ensure the collapse of the Hamas government and conditioned its support for Fatah based on the rejection of any unity government.

The European Union and the United Nations were hardly helpful, for they could have insisted on the respect of Palestinian voters, but they succumbed under American pressure.

However, there can also be no denial that these factors alone should not have jeopardized Palestinian unity, if the factions were keen on it.

To appreciate this further, one must look at the experience of Palestinian prisoners in Israeli jails. Although they divide themselves based on factional and ideological affiliations, they tend to exhibit much more solidarity amongst themselves. When a prisoner from a certain group goes on a hunger strike, he or she is often joined by a few, tens or even hundreds of other political prisoners from all factions.

These prisoners find ways to communicate and transfer messages amongst themselves, even when in solitary confinement or shackled to their beds.

They even hold elections in larger prisons to choose their own representatives, and issue joint letters to Palestinians outside, calling for unity and a common strategy.

If shackled prisoners are able to foster dialogue and adhere to a semblance of unity, those living in Ramallah mansions and those free to travel outside Palestine should be able to do so, too.

But the truth is, for many within the Palestinian leadership, unity is not an urgent matter and, for them, the ascendency of the faction will always trump the centrality of the homeland.

This is partly because factional politics is deeply rooted in Palestinian society. And like the Israeli Occupation, factionalism is an enemy of the Palestinian people. It has constantly overwhelmed any attempt at fostering dialogue and true democracy among Palestinians.

It is true that democracy is suffering a crisis in various parts of the world. In Brazil, a parliamentary subversion pushed an elected president out of office. In the UK, Labor Party plotters are entirely discounting the election of a popular leader. In the United States, democracy had been reduced to clichés while powerful elites are bankrolling wealthy candidates who are, more or less, propagating the same ideas.

But Palestine is different. It ought to be different. For Palestinian society, dialogue and a degree of a democratic process is essential for any meaningful national unity.

Without unity in politics, it is difficult to envisage unity in purpose, a national liberation project, a unified resistance strategy and the eventual freedom of the Palestinians.

There can never be a free Palestine without Palestinians first freeing themselves from factional repression, for which they, and only they, are ultimately responsible.

For Israel, Palestinian factionalism is a central piece in its strategy to divide and rule. Sadly, many Palestinians are playing along, and by doing so are jeopardizing their own salvation.

OpEds: Tribute to Fidel Castro on His 90th Birthday

Gaza Is Better Than Auschwitz

Unity at Last: The Palestinian People Have Risen