Interviewed by Tass ahead of meeting with Putin, Erdogan was asked to explain his agenda. Restoring ruptured economic relations was very much on his mind. 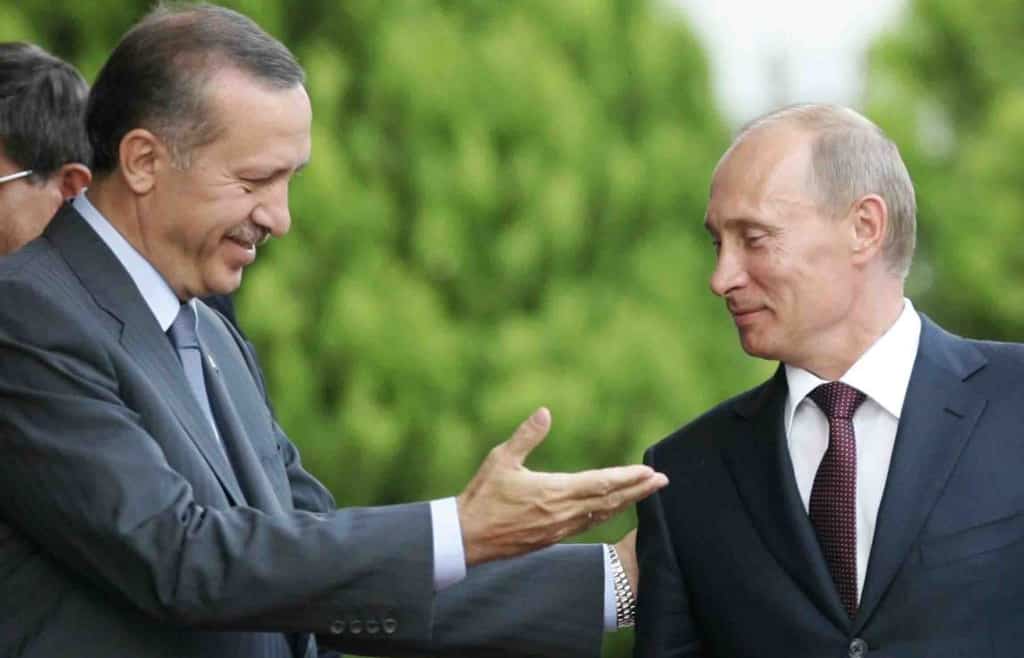 He called his visit “a new landmark in bilateral relations, a clean slate from which to start anew.” He thanked Putin for being the first foreign leader to express support for his leadership by phone after the aborted events of July 15.

“Mr. Putin acted quickly and practically without delay,” he said. “I express my gratitude to him.” At the same time, his comments on resolving years of Syrian conflict were less than reassuring.

On the one hand, he said “Russia is fundamentally the key and most important player in establishing peace in Syria…(I)f necessary, we’ll also involve Iran…Qatar, Saudi Arabia and America.”

While adding “(w)e don’t want Syria’s disintegration,” he ignored his longtime aim to annex northern portions of its territory illegally. He supports “the departure of Bashar Assad,” irresponsibly calling him “guilty for the deaths of 600,000 people.”

“Syria’s unity cannot be kept with Assad. And we cannot support a murderer (sic) who has committed acts of state terror. Let the Syrian people themselves elect an individual they want to see in power.”

In June 2014, they overwhelmingly reelected him with an 89% majority – a process independent observers called open, free and fair. Syrians want no one else leading them.

Despite clear evidence proving it, Erdogan denied involvement in aiding ISIS and other terrorists in Syria – operating from Turkish territory, receiving heavy arms, munitions and medical care for its wounded.

He said cold-blooded Jabhat al-Nusra (renamed Jabhat Fatah al Sham) killers “should not be considered as a terrorist organization…This is an incorrect approach,” he added.

He ducked responsibility for slaughtering Kurds domestically, in Syria and Iraq, calling them terrorists, saying “ensur(ing) peace (requires) destroying” them.

He lets CIA and other NATO elements operate from Turkish territory, supporting ISIS and other terrorist groups. He’s complicit in waging war on Assad, in slaughtering Syrian civilians, serving his own agenda while aiding Washington’s.

Arms, munitions and military equipment from America, Turkey and other nations pour into Syria through its border.

Nothing so far suggests Erdogan ended support for US-backed terrorists. On August 8, the day preceding his St. Petersburg visit, the Financial Times headlined “Outside help behind rebel advance in Aleppo,” saying:

“(T)he offensive against President Bashar al-Assad’s troops may have had more foreign help than it appears.” One unnamed source said “tens of trucks (were spotted) bringing in weapons” cross-border “daily for weeks…weapons, artillery – we’re not just talking about some bullets or guns.”

“(C)ash and supplies (have been) ferried in for weeks.” While meeting with Putin in St. Petersburg, Erdogan continued actively aiding terrorists slaughtering Syrian civilians.

Did their discussion change things? No evidence so far suggests it, but it’s too early to tell. Turkey is a NATO member with close ties to anti-Assad regimes.

He wants normalized relations with Russia restored while insisting Assad must go – showing he and Putin remain intractably apart on resolving Syria’s conflict diplomatically, at least so far.

Will he shift from being anti-Assad to allying with Russia in combating terrorism in Syria – or at least stop supporting it? Will he close Turkey’s border with Syria to halt daily flows of weapons, munitions and terrorist fighters to replenish depleted ranks?

Will he change from anti-Syrian belligerent to supporting Russia’s peace initiative? The fullness of time will tell which way he goes. Count on nothing positive unless he proves it conclusively and sticks by any commitment he may make.

Given his complicity with Washington throughout years of conflict as a NATO member and for his own self-interest, it’s hard being optimistic for what lies ahead.

Despite strained relations with Washington, he may try playing the US and Russia card simultaneously, proving he can’t be trusted if that’s his intention.

STEPHEN LENDMAN lives in Chicago. He can be reached at lendmanstephen@sbcglobal.net. His new book as editor and contributor is titled "Flashpoint in Ukraine: US Drive for Hegemony Risks WW III."  (http://www.claritypress.com/LendmanIII.html ) Visit his blog site at sjlendman.blogspot.com.

If you appreciate our articles, do the right thing and let us know by subscribing. It’s free and it implies no obligation to you—ever. We just want to have a way to reach our most loyal readers on important occasions when their input is necessary.  In return you get our email newsletter compiling the best of The Greanville Post several times a week.
[email-subscribers namefield=”YES” desc=”” group=”Public”]
0 0 votes
Article Rating
All comments subject to anti-hacking filters.
0 comment 0 FacebookTwitterPinterestLinkedinVKRedditWhatsappTelegramEmail
previous post

Seeing Yugoslavia through a dark glass