Alton Sterling’s Right to Exist in the City 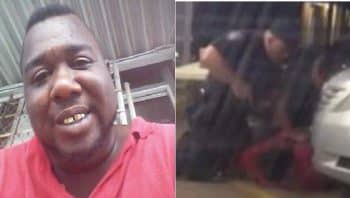 Editor's Note
Of the several insightful points brought up by Billet in this essay,the most important (in my opinion) is the defining of social space. One of the key components to institutionalized racism in the United States is the legal enforcement of social space. The U.S. has used a variety of mechanisms both private and public to physically (and with that psychologically) constrain people of color to specific physical and social spaces. Red lining, neighborhood coalitions, and segregated services were once common ways of controlling and enforcing WHITE space. The laws and practices then and now are maintaining the space of the privileged by the harsh, and sometimes, deadly examples of what happens to those unprivileged who dare to "trespass" in white space. Henry A. Giroux has done an excellent job discussing the concept of social space as it relates to dispossession, and the enforcement, disposability, and erasure.
Baton Rouge locals referred to Alton Sterling as “CD man,” a figure who can likely be found in virtually any American city. This, in the eyes of a police officer trained to find anything a black man does suspicious, was as good an excuse as any.

Sterling’s death undeniably echoes Eric Garner’s — strangled to death after being stopped by a cop for selling loose cigarettes — and Jordan Davis’s — gunned down by Michael Dunn after he and his friends wouldn’t turn down what Dunn referred to as “that rap crap.” What, in the name of all that is decent and rational and minimally human, could be so threatening about selling or listening to something?

The answer cannot be found in what was being done, but in how a racist society reacts when certain people do it. Those tasked with “keeping the peace” and “maintaining order” aren’t just somehow more susceptible to this — it’s their job to keep this imbalance in place.

We should be clear that Sterling was not killed because he was selling CDs or because he had a gun. The manner of his death came instead because of where he lived: in a country built and maintained by racism. His death — like Philando Castile’s, like too many others’ before either of them — encapsulates the result of a collision between this kind of racism, the slow strangulation of public space, and the chipping away of the right to a democratic culture. They are inextricably linked.

The rules dictating who gets to use public space, when they get to use it, and for what purpose springs organically from persistent structural racism. Jim Crow’s “whites only” signs may have been taken down, but our geography has been privatized and reshaped to help keep these types of restrictions roughly in effect.

Examples range from the subtle to the brazen to the shameless. City squares are designed to encourage visitors to rush through them rather than linger. Public parks, funded by the people’s taxes, become not-so-public when certain gatherings take place in them, as former Occupiers remember well. Benches and concrete slabs are transformed by “defensive architecture” to prevent those experiencing homelessness from lying down.

This also limits arts and culture. Busking and sidewalk performance have been heavily restricted in most big cities, requiring performers to purchase expensive permits for the privilege of presenting their craft. Graffiti laws arbitrarily and undemocratically decide what’s art and what’s vandalism. (Israel Hernandez’s death poignantly illustrates the consequences of this kind of line in the sand.)

While Sterling wasn’t a cultural producer, he was engaged in the cultural industry. Street CD salespeople sell both legitimate and bootleg music. Often, if they’re serious collectors themselves — as many of them are — they’ll have rarities or mixes long out of print that you can’t find anywhere else. Those who frequented Sterling’s table recall that if he didn’t have a specific release one week, they would come back the next and discover he had gone out of his way to find it.

CD men and women engage in commodity exchange, of course. But on a basic level, even though (and in some ways because) they exist outside the music industry’s “official” avenues of commerce, they keep alive the notion that the city is a site for the exchange of ideas and culture. They are also — like graffiti artists, street performers, and homeless individuals — subject to hassling and harassment by police in the revanchist city.

But there is a darker and more tragic side to these city mainstays: many of them are excluded from the so-called straight economy because of their contact with the criminal-justice system. Sterling had a record, and the New Jim Crow ensures that convicted felons and ex-cons have a much harder time finding “legitimate” employment after they are released.

The informal economy, in its semi-legal status, is often the only thing preventing people like Sterling from participating in the illegal economy and risking going back inside. How many of those hawking CDs or DVDs or used books do so not because they love it but because they have no other choice?

All of this leads to an unsettling conclusion: black Americans’ equal economic and cultural participation isn’t only frowned upon, but outright threatening to a large swath of the country, particularly if people of color set the terms of their participation. Further, the estrangement of the urban commons from working people — the denial of the right to the city — depends on racism to endure.

It is stunning to think that eight years after America’s first black president was elected, hip-hop clothing and music still make many Americans nervous. Even as Janelle Monae and Kendrick Lamar entertain the Obamas on the Fourth of July, their music’s politics seem to point to a contradiction they themselves cannot resolve.

After Davis was murdered, proud gun owner Dunn dismissed blame of the “Stand Your Ground” laws and instead pointed the finger at “the violence and lifestyle that the ‘Gangsta Rap’ music and the ‘thug life’ promote.” Dallas police underhandedly pointed to Micah Johnson’s so-called connection to Public Enemy’s Professor Griff. City politicians seriously entertain legislating the sagginess of someone’s pants. It is little wonder why, in the dialectical interplay between culture and society, African-American subcultures have so frequently become a style of opposition.

This is nothing new. The 1940s zoot suits — entwined as they were in big band and bebop — represented both one of the first cultural manifestations of the changing cosmopolitan experience after the Great Migration and a threat to the American way of life. Robin D.G. Kelley illustrates this while painting the backdrop of Malcolm X’s time as a zoot:

While the suit itself was not meant as a direct political statement, the social context in which it was created and worn rendered it so. The language and culture of zoot suiters represented a subversive refusal to be subservient. Young black males created a fast-paced, improvisational language which sharply contrasted with the passive stereotype of the stuttering, tongue-tied Sambo: in a world where whites commonly addressed them as “boy,” zoot suiters made a fetish of calling each other “man.”

How zoot-suit culture directly opposed perceptions of black Americans helps explain why the Black Lives Matter movement — and many contemporary movements for that matter — have focused on the seizure of public space. These actions bring racialized usage to its unavoidable head in hopes of uprooting it.

When protesters block highways, they draw attention to how urban infrastructure aids in modern segregation. The wave of graffiti that swept across Confederate memorials last summer highlights the persistence of legal racism. Both make clear that black human beings have less claim to public space, less permission to participate in the cultural commons. And they’ve also made it clear that although African Americans’ second-class citizenship is now often harder to identify, it is no more acceptable today than it was fifty or a hundred years ago.

What is at stake in Alton Sterling’s death isn’t just the right to distribute music unmolested — though that is worth fighting for. What’s at stake is the right to the city, and the radical idea that space and culture should belong to those who actually produce them.

THANKS FOR YOUR EXAMPLE, FIDEL

A Quest for Wisdom: Inspiring Purpose on the...

NEW AGERS VS NEO-PAGANS: CAN EITHER BE SALVAGED...

The Pressure Campaign on Spotify to...