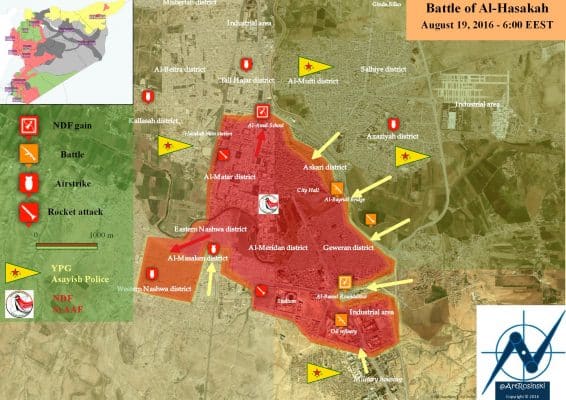 Conflict map as of Aug. 19, 2016 of fighting between US, and US-backed Kurdish forces and ISIS in the city of Hasakah. (Conflict News)

Editor's Note
We are in a period of high propaganda where readers are lead by the nose with very carefully crafted propaganda that is repeated along a storyline so that regardless where the hapless (dis)information consumer enters, they are already down the rabbit hole into make-shit-up-land. It is happening overtime in Syria because the Russian presence has upped the anti of a more than plausible counter-story; a story that lays bare the lie of ISIS and oil, rebels and terrorists. Thankfully we have a handful of folks (Felicity Arbuthnot among them) who can spot the twists and turn of plots in a world where WORDS really do have power, and sharp eyes and wits are required for the unraveling of lies hiding ugly truths buried deeper and deeper in the sand.

Back in “I cannot believe what I am reading” land, the Daily Telegraph reports (1) that the US has warned Syrian Air Force ‘planes flying over Hasakah – capital city of Al-Hasakah Governorate in the far north east of the country, eighty km south of the Turkish border – “against any new strikes that might endanger its military advisers …”

Said “advisors” are illegally in the country to aid the US-backed Kurdish forces as well as the varying Al-Qaeda-spawned, organ- eating head-choppers who change names and allegiances near too often to catch up with.

The Telegraph reminds that:

“Deadly clashes erupted between pro-government militia and the US-backed Kurdish forces on Wednesday. The following day, the regime launched its first ever air strikes against the Kurds.”

Interesting to note that reality has been again turned upside down, with the Syrian government forces —SAA, the legitimate army of Syria—becoming “militia” and the US- backed Kurdish “rebels” becoming “forces.” (emphases mine for clarity)

“The unprecedented strikes against six Kurdish positions in the northeastern city prompted the US-led coalition to scramble aircraft to protect US special operations forces advisers deployed with the Kurdish forces.

“It was the first time the coalition had confirmed deploying warplanes against the Syrian Air Force.”

At least the US has finally admitted what has been know for years about its 2006 plot hatched up in the US Embassy in Damascus (2) to overthrow the country’s legitimate and popular President by funding and fermenting internal strife.

In a further statement of jaw-dropping arrogance: ‘Pentagon spokesman Captain Jeff Davis, warned that: “the Syrian regime would be well advised not to do things that place them (the US backed ‘coalition forces’ and their US illegal immigrant advisers) at risk.”

The heading of the Telegraph article is: “Syria deploys warplanes over Hasakah despite US warning …”

Article 51 of the UN Charter is specific: “Nothing in the present Charter shall impair the inherent right of individual or collective self-defence if an armed attack occurs against a Member of the United Nations, until the Security Council has taken the measures necessary to maintain international peace and security.”

Whilst it is inconceivable that the UN Security Council would censure its quasi boss, the US, Article 51 and numerous other international laws on nations’ right to self defence still stand and much of the world is increasingly incandescent at the flagrant abuse of all painstakingly fashioned legalities aimed at preventing naked aggressions of sovereignty and nation states.

In the meantime, the US warns Syria to back off and allow them to continue to bomb and invade their country and destroy their armed forces.

More proof of this astonishing mind numbing arrogance has just appeared in The Aviationist (3): “Two Syrian Su-24 Fencer warplanes attempting to fly over a Kurdish-held area in northeastern Syria where U.S. SOF (Special Operations Forces) are operating, get intercepted by U.S. F-22 and encouraged to depart the airspace.

“Following the first ‘close encounter’ the Pentagon warned Assad regime to not fly or conduct raids in the area where the American SOF are operating. However, on Aug. 19, two Su-24 Fencers, attempted again to penetrate the airspace near Hasakah … 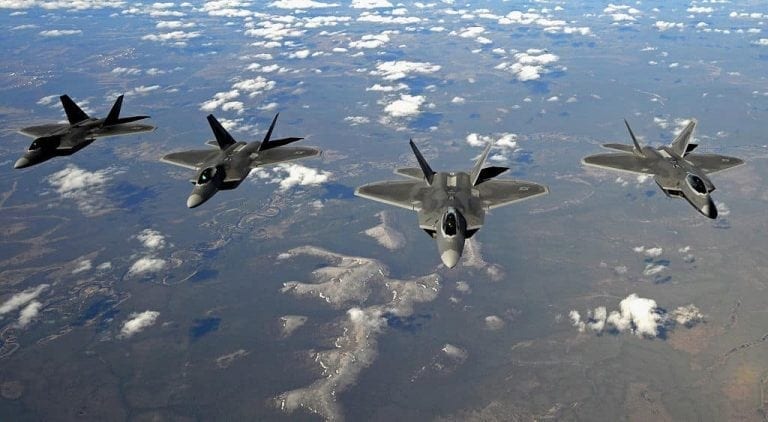 The F-22 Raptor is a “stealth” jet (with a spotty record). Photo: Staff Sgt. Brian Ferguson)

“This is not the first time the F-22 presence deters foreign military aircraft from harassing U.S. forces.”

One can only conclude the US Administration, Pentagon and the entire State apparatus have collectively lost every last shred of sanity. Their decency departed a long time ago.

If you appreciate our articles, do the right thing and let us know by subscribing. It’s free and it implies no obligation to you—ever. We just want to have a way to reach our most loyal readers on important occasions when their input is necessary. In return you get our email newsletter compiling the best of The Greanville Post several times a week.
[email-subscribers namefield=”YES” desc=”” group=”Public”]
All comments subject to anti-hacking filters.
1 comment 0 FacebookTwitterPinterestLinkedinVKRedditWhatsappTelegramEmail
previous post

Gorillas Seen Dismantling Poachers’ Traps In The Wild – A First

Nazi Germany is today, not MERELY in the...

The constantly (and prematurely) announced death of the...

Considering what horrors the US has unleashed over the last two decades, I don’t think they have any sanity to lose and haven’t had for a very long time!