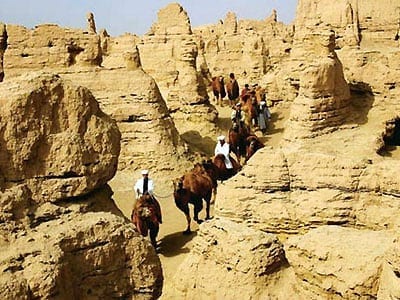 The geostrategic analyst called attention to the fact that some of the New Silk Road’s routes run through existing and potential hotbeds of instability, posing a significant risk to the project.

“The primary threat comes from Islamic states and regions that form a contiguous crescent of instability from Afghanistan-Pakistan (AfPak) to the southern expanses of the Caucasus to the Middle East and North Africa (MENA), as well as a narrow spur to Bosnia and Kosovo. Religious fundamentalism and anarchy in MENA is rising unfettered by the year. There is no light at the end of the tunnel here for the foreseeable future,” Maavak told Sputnik.

“Not so coincidentally, many of these nations are allied to the West — the same West that is continually antagonizing Russia along its western borders, particularly in Ukraine,” the analyst remarked.

According to Maavak, “prior lack of coordination” between the RIC (Russia, India and China) nations has led to many arterial chokepoints being concentrated in these high risk regions.

Given the threat posed by al-Qaeda and other Islamic extremist groups “it will be myopic to spend hundreds of billions in infrastructure in Central Asia,” he believes.

On the other hand, Iran may play a balancing role in the Middle East region, the geostrategic analyst added.

“Iran may play a balancing role here. The newly-opened Chabahar port, built with Indian assistance, provides a viable port of call for a revived maritime silk route in the Indian Ocean. It all depends on the Iranian leadership and whether it desires some form of limited security accommodation with the RIC nations. Otherwise, Iran might smolder with the rest of the Middle East,” he stressed. 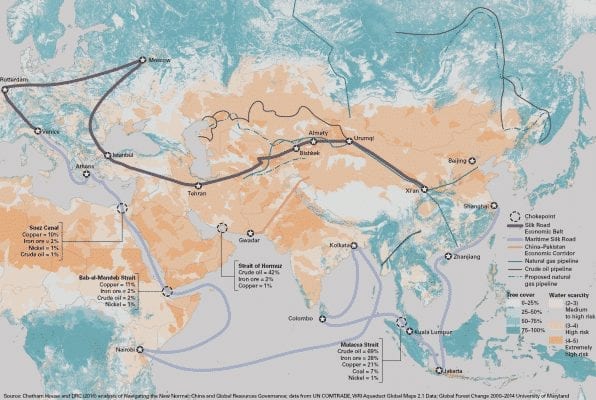 This map shows the breadth and scale of China’s plans for ‘new silk roads’, including extensive transport and logistical links by land and sea.

How could major Eurasian powers tackle the problem?

First and foremost, Russia, China, Iran “should spread their arterial trade risks across geographically safe regions, and avoid undue reliance on Central Asia as a transit or economic corridor,” the analyst explained.

“To ensure geo-economic autarky, the RIC nations should prioritize trade routes within their borders — to the extent possible. The safest trade routes in the near-future would look something like the China-Mongolia-Russia Economic Corridor. Southeast Asia can also reap great rewards from the RIC nations. After all, the entire region was literally forged by the DNAs of both China and India since time immemorial,” Maavak underscored.

“Southeast Asia traditionally provided excellent returns on investments. India itself is hungry for new infrastructure with Prime Minister Narendra Modi never missing a chance to promote his ‘Make in India’ program,” he continued.

“Perhaps, the RIC nations along with Malaysia and Thailand can also revive the Kra Canal project, in tandem with upgrades and planned connections to the Kunming-Singapore railway network. China is grappling with excess steel and cement output, and these surpluses could be put to good use by building regional trade arteries of the future,” he stressed.

According to the geostrategic analyst, the New Silk Road “rebalancing” may help Central Asian states to maintain long-term neutrality. With the New Silk Road’s routes redrawn and risks diminished, Central Asia will see that that its economic future and prosperity lies immediately to the north, east, west and south of the region.

Commenting on Western journalists’ assumption that “the ultimate prize in the Silk Road plan” lies in Europe, Maavak called attention to the fact that not everything is rosy in the West’s garden.
“Where does one start to describe this ticking time bomb? The US debt clock is breaching multiple records by the minute. Around 43 million young Americans are saddled with $1.3 trillion in student loan debt. That is almost equivalent to the entire GDP of India (2013),” the geostrategic analyst told Sputnik.
“Things are not looking good in Europe either. Deutsche Bank now poses the greatest risk to the global financial system, with its derivatives exposure worth $72.8 trillion in 2013. That is equivalent to the entire global GDP. JP Morgan’s exposure is reportedly more modest, at around $70 trillion. The current economic paradigm is perched on a giant house of cards,” he noted.
“Therefore, it is pointless to build bridges and trade networks to a region facing socio-economic disintegration on a scale that may dwarf anything seen since the 1930s,” Maavak suggested.
At the same time the East now has an unbeatable advantage over the West, the geostrategic analyst added.

“I had written how Greater Eurasia now forms a self-sustaining ecosystem. For the first time in modern history, the East can survive without the West — albeit perhaps at a sub-par level — but the West cannot function for a single day without the East. Virtually every nut, bolt and washer is produced in the East. If our economies collapse, it will deprive the West of every hook, line and sinker. And the plumbing tape too! Even their underwear is manufactured in this region,” Maavak elaborated.

According to the analyst, there is no coincidence that the “crescent of instability” has currently engulfed the north and northeast of the African continent, the Middle East, the Central Asia region and beyond.

Back in the 1970s, then President Carter’s security advisor Zbigniew Brzezinski promoted the idea of the “Arc of Crisis” stretching from the Indian subcontinent in the east to the Horn of Africa in the west — with the Middle East as its central core.

The Brzezinski doctrine targeted nation-states of the region which he regarded as a potential bulwark against the USSR and its allies.

In his 1998 interview with Le Nouvel Observateur Brzezinski acknowledged that the US had weaponized radical Islamism in the region against the Soviet Union and secular regimes.

Following the collapse of the USSR, Brzezinski wrote in his book “The Grand Chessboard” that the key to preserving the US-led unipolar world order was to prevent the rise of any competitors in Eurasia.

Interestingly enough, a strikingly similar concept was recently voiced by George Friedman, the founder and chairman of the private intelligence and geopolitical forecasting corporation, Stratfor.

During his speech at the Chicago Council on Global Affairs in February 2015 Friedman admitted that though “the United States cannot occupy Eurasia,” it can throw its geopolitical rivals off balance to prevent their rise.

Washington does “have the ability to support various contending powers [in Eurasia], so that they will concentrate on themselves, with political support, some economic support, military support and advisors,” Friedman explained.

Is there possibility that the US will try to complicate the Russo-Sino-Indian infrastructural project in Eurasia?

“Without a shadow of doubt!” Maavak asserted.

“The West’s economic clout is waning rapidly but it wants to take the East down with it. Playing second fiddle to Eurasia is not an option for Washington,” he underscored 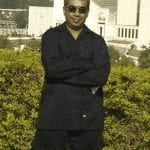 If you appreciate our articles, do the right thing and let us know by subscribing. It’s free and it implies no obligation to you—ever. We just want to have a way to reach our most loyal readers on important occasions when their input is necessary. In return you get our email newsletter compiling the best of The Greanville Post several times a week.
[email-subscribers namefield=”YES” desc=”” group=”Public”]
Make sure many more people see this. It's literally a matter of life an death. Imperial lies kill! Share widely.
0
FacebookTwitterPinterestRedditEmail
previous post

Hillary and the Clinton Foundation: Exemplars of America’s Political Rot

Refugees take a stand across the Southern US