The Financial Times editorial page carries a logo that proclaims: “Without fear and without favour”. Indeed the editors have shown no fear when it comes to. . . fabricating lies, promoting imperial wars decimating countries and impoverishing millions, whether in Libya, Syria, Iraq, Afghanistan, Yemen and now Venezuela.  The fearless “Lies of Our Times” have been at the forefront forging pretexts for inciting imperial armies to crush independent governments.

Despite its pretentious scribblers and prestigious claims, the FT is seen by the Anglo-American financial class as a belligerent purveyor of militarist policies designed for the most retrograde sectors of the ruling elite.

What is most striking about the FT fearless fabrications on behalf of imperial militarism is how often their political and economic prognostications have been incompetent and flat out wrong.

For the past ten years, the FT editorial pages have described China in economic crisis and heading for a fall, while in reality, the Chinese economy has grown at between eight and six percent a year.

For over a decade and a half, the FT editors claimed Russia under President Vladimir Putin presented an international existential threat to ‘the West’. In fact, it was the ‘Western’ armies of NATO, which expanded military operations to the borders of Russia, the US, which financed a neo-fascist coup in Kiev and the US-EU which promoted an Islamist uprising in Syria designed to totally undermine Russia’s influence and relations in the Middle East.

The FT’s economic gurus and its leading columnists prescribed the very catastrophic deregulatory formulas which precipitated the financial crash of 2008-09, after which they played the clownish role of “Mickey the Dunce” – blaming others for the failed policies.

The gentlemen editors of FT did not cover the horrific murders of an elected Chavista congresswoman and her two young children, who were executed (shot in the head) in broad daylight by opposition-paid hitmen.

The fearless FT scribes are currently leading a virulent propaganda campaign to promote the violent overthrow of the democratically elected Venezuelan government of President Nicolas Maduro.

This essay will identify the FT’s latest pack of fearless lies and fabrications and then conclude by analyzing the political consequences for Venezuela and other independent regimes.

The Financial Times and Venezuela: From War in the Suites to Terror in the Streets

In covering the crisis in Venezuela, the FT has systematically ignored the ongoing campaign of assaults and assassinations against elected officials, security officers, military and police who have been murdered by the FT’s favored ‘opposition’. 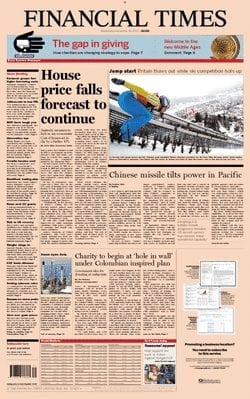 The FT did not cover the horrific murders of an elected Chavista congresswoman and her two young children, who were executed (shot in the head) in broad daylight by opposition-paid hitmen.

These ongoing opposition terror campaigns against the elected government and the general public are systematicallyignored in the FTs ‘reports’ and on its editorial pages, which focus more on the shortages of consumer items.

The FT cover-up of rightwing terror extended to inventing a ‘possible’ army or National Guard plan to open fire on opposition demonstrators. In this case, the FT anticipated rightwing violence by laying the blame on the government in advance.

The FT covers-up the opposition business elite’s campaign of hoarding essential goods to create artificial shortages and panic buying. [This is an old rightwing/CIA de-stabilization trick; it was used, for example against Chile’s socialist President Salvador Allende in 1973—Eds] They deny the ongoing price gouging and pin the blame for shortages and long consumer lines exclusively on ‘regime mismanagement’.

The FT conveniently omits to mention that the decline in world oil prices has affected not only the economy of Venezuela but all countries dependent on commodity exports, including the Financial Times favorite neo-liberal regimes in Brazil and Argentina.

The Financial Times cites bogus ‘opinion’ polls, which wildly exaggerate the government’s declining popularity: In the recent elections Maduro’s supporters secured 40% of the popular vote while the FT claims his support to be 7%!

US client regimes (Mexico, Peru, and Colombia) are the largest producers of illegal drugs and US banks are the largest launderers for narco-money. Yet the FT reports on “Venezuela’s role as a conduit for illegal drugs smuggled north to the US and east into Brazil, Africa and thence to Europe”. Drug enforcement experts all agree that Colombia, home to seven US military bases and with a regime closely linked to paramilitary-narco gangs, is the source of drugs smuggled through Venezuela. That Venezuela has become a victim of the violent Colombian narco-trade is never acknowledged by the elegant City of London pen-prostitutes.

The FT blames the re-emergence of ‘malaria and other possible diseases’ on the leftist Maduro government. In fact the recent ‘malaria outbreak’ (also cited by the New York Timespropagandists) is based on a single illegal gold miner.

The FT ignores how the US- backed neo-liberal regimes in Argentina and Brazil, which rule by presidential decree, have slashed public health programs setting the stage for much greater public health crises.

The Financial Times is waging an all-out propaganda war with one goal: To incite the violent seizure of power in Venezuela by US political clients.

In line with the Obama-Clinton ‘regime-change by any means’ policies, the FT paints a deceptive picture of Venezuela facing  ‘multiple crises’, representing a ‘destabilizing’ threat to the hemisphere, and on the brink of a global ‘humanitarian crisis’.

Armed with these deadly clichés, the FT editorial pagesdemand  “a new government soon and certainlybefore the 2018 elections”.

Recently, the FT proposed a phony legal gimmick – a recall referendum. However, since the opposition cannot initiate the vote in time to oust the elected President Maduro, the FT calls for “events which precipitate changes sooner” – a violent coup!

The FT expects that “blood in Caracas will require an active Latin America response”(sic). In other words, the FThopes that a US-backed military invasion from neighboring Colombia would help eliminate the Chavistas and install a rightist regime.

The Financial Times, which actively promoted the NATO-led destruction of the government in Libya, now calls for a US-led invasion of Venezuela. Never ones to re-assess their promotion of ‘regime change’, the FT now calls for a violent coup in Venezuela, which will exceed that of Libya in terms of the loss of thousands of Venezuelan lives and the brutal reversal of a decade of significant socio-economic progress.

“Without fear and without favor”, the FT speaks for imperial wars everywhere.

The US presidential elections take place just as the Obama-Clinton regime prepares to intervene in Venezuela. Using bogus ‘humanitarian’ reports of widespread hunger, disease, violence and instability, the Obama will still need Venezuelan thugs to provoke enough violent street violence to trigger an’ invitation’ for Washington’s Latin American military partners to ‘intervene’ under the auspices of the UN or OAS.

If ‘successful’, a rapid overthrow of the elected government in Caracas could be presented as a victory for Hilary Clinton’s campaign, and an example of her policy of ‘humanitarian-military interventions’ around the world.

However, if Obama’s allied invasion does not produce a quick and easy victory, if the Venezuelan people and armed forces mount a prolonged and courageous defense of their government and if US lives are lost in what could turn into a popular war of resistance, then Washington’s intervention could ultimately discredit the Clinton campaign and her ‘muscular’ foreign policy. The American electorate might finally decide against four more years of losing wars and losing lives. No thanks to the ‘fearless’Financial Times.

The original source of this article is Global Research
Copyright © Prof. James Petras, Global Research, 2016
NOTE: ALL IMAGE CAPTIONS, PULL QUOTES AND COMMENTARY BY THE EDITORS, NOT THE AUTHORS
PLEASE COMMENT AND DEBATE DIRECTLY ON OUR FACEBOOK GROUP INSTALLATION
ABOUT THE AUTHOR
James Petras is a retired Bartle Professor of Sociology at Binghamton University in Binghamton, New York and adjunct professor at Saint Mary’s University, Halifax, Nova Scotia, Canada who has published on Latin American and Middle Eastern political issues.

Meet the Geronimos: Apache Leader’s Descendants Talk About Living With the Legacy