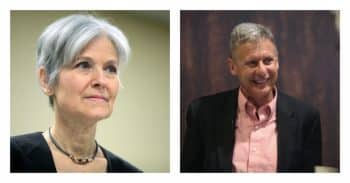 Editor's Note
We cannot let this opportunity pass. We are unlikely to ever get a better time for the crying need for independent party candidates. It is now or never! Shout it from the mountain tops. Throw the candidates of your choice a few bucks. Volunteer to make some phone calls. Please don't let this pass us by.

ACTION ALERT AT END OF ARTICLE

The presidential debates have been transformed into “a choreographed and carefully scripted farce that prevents honest discussion of the real issues our country faces,” Green Party presidential candidate Jill Stein declared in an op-ed on Tuesday.

“The CPD is a thinly disguised scheme to protect the two establishment parties from competition,” Stein wrote at the Guardian, “and perpetuates a political system controlled by the wealthy and big business interests.”

A recent Morning Consult poll similarly found that more than half of registered voters believe Johnson should partake in the debate scheduled for Sept. 26 and 47 percent believe Stein should.

Observing that the CPD “also keeps the debates within a narrow set of issues determined by party bosses,” Stein called for “a new independent debate commission” that would “reflect the true diversity of the American public” and in turn “usher in a new era of debates that truly inform the voters and challenge the status quo.”

The CPD requires that candidates poll at 15 percent or higher in five national polls to be included in the debates. The RealClearPolitics average currently has Johnson polling around eight percent and Stein hovering at three percent.

But as Stein noted, the 15 percent threshold is an “artificial” and “arbitrary” barrier that does little to aid the free exchange of ideas. And with both third-party candidates “on enough ballots to win the presidency,” Stein said: “The American people deserve to hear our perspectives.”

To that end, she called on both Republican nominee Donald Trump—who criticized the 15 percent threshold in 2000—and Democratic nominee Hillary Clinton to “stand for open debates and American democracy” by demanding four-way debates in 2016.

Stein’s campaign plans to reiterate this demand on Thursday, at a protest outside Clinton’s Brooklyn campaign headquarters.

However, as writer Laurel Avery opined at the Huffington Post on Tuesday, the leading candidates have good reason to quash the growing call for more open debates:

People already know about Clinton and Trump. Both have a ton of money at their disposal, and they have received a lot of free exposure from the mainstream media, even before the primaries started. But just because someone is familiar doesn’t mean they have your best interests in mind. The two establishment candidates don’t want to include third party candidates in the debates because they know if they do, they might lose when you realize you have better choices.

A RootsAction petition calling on network TV executives to include third-party candidates in the debates currently has more than 18,000 signatures.