Fifteen years since the 9/11 attacks 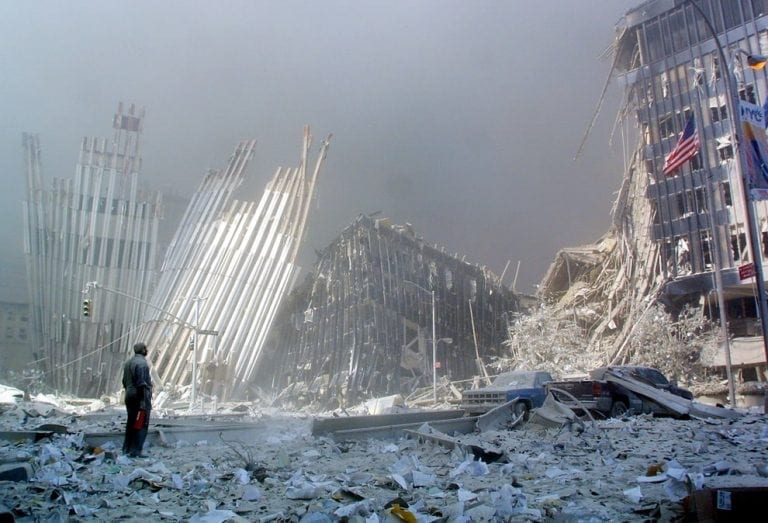 Yesterday marked the fifteenth anniversary of the terrorist attacks of September 11, 2001 that killed more than 2,900 people in the United States. Nineteen supporters of Al Qaeda, 15 of them from Saudi Arabia, like the group’s founder Osama bin Laden, hijacked four airliners. They crashed two planes into the twin towers of the World Trade Center in New York, demolishing them; one into the Pentagon building in Washington; and plunged the other into a field in Pennsylvania to prevent passengers retaking control of the aircraft.

The horrific mass murder of thousands of civilians was not only a criminal act. It was, from a political standpoint, reactionary. It served the interests of American and world imperialism. The ruling classes in the United States, Europe and, indeed, throughout the world, exploited the horror and confusion that followed the attack to legitimize perpetual war and ever-expanding attacks on democratic rights.

The “war on terror,” proclaimed by the Bush administration in the immediate aftermath of 9/11, has been based, from the start, on misinformation and outright lies. The administration declared that the United States was engaged in a life-and-death struggle against Al Qaeda. Fifteen years later, it is a basic and undisputable fact that Al Qaeda is a key ally of the United States in the far-flung military operations being conducted by the CIA, above all in Syria.

The “war on terror” was invoked to justify attacks on Iraq, Afghanistan, Libya, Syria and Yemen—countries that had nothing whatsoever to do with 9/11. The death toll numbers in the millions. The devastation of the region is a principal factor in the greatest refugee crisis since World War II, with over 60 million displaced persons seeking sanctuary.

A decade and a half after September 11, 2001, it is clear that the events of that day were no more the cause of the wars that followed than the assassination of the Archduke Ferdinand in Sarajevo in June 1914 was the real cause of the outbreak of World War I.

The US government has never attempted to explain how and why the “war on terror” has morphed into a conflict with the larger geostrategic rivals of the United States, particularly Russia and China, which threatens to unleash World War III.

The horrific mass murder of thousands of civilians was not only a criminal act. It was, from a political standpoint, reactionary. It served the interests of American and world imperialism. The ruling classes in the United States, Europe and, indeed, throughout the world, exploited the horror and confusion that followed the attack to legitimize perpetual war and ever-expanding attacks on democratic rights.

[dropcap]O[/dropcap]ne of the most remarkable facts of the 9/11 attacks is that, despite their central role in the foreign and domestic policy of the United States for fifteen years, there has never been a serious and credible investigation of what actually took place. The US intelligence agencies had ample warning of the impending attacks, had kept many of the perpetrators under active surveillance, and had longstanding ties to Osama bin Laden and his network, which was formed out of the CIA-orchestrated guerrilla warfare in Afghanistan during the 1980s against the Soviet-backed [progressive] regime then in power in Kabul.

No government official has ever been held accountable for what is universally described as a catastrophic intelligence failure. After Pearl Harbor—to which 9/11 is frequently compared—admirals were fired. But not a single official of the vast US military-intelligence complex lost his job after an attack carried out by well-known terrorists, many of them under state surveillance, and two of them actually living in the home of an FBI informant.

Within weeks of the attacks, US and allied military forces implemented long-held plans and invaded Afghanistan, on the pretext that the Islamist Taliban government was harboring bin Laden. The Afghan war has claimed tens of thousands of lives and driven millions from their homes in Afghanistan and north-west Pakistan. It continues to this day, more than five years after bin Laden’s assassination at the safe house where he resided, near a military college in the city of Abbottabad, Pakistan, a key US ally.

Within the United States, the 9/11 attacks became the pretext for intensifying attacks on democratic rights, under conditions of ever-widening social inequality and mounting class antagonisms. The congressional passage of the “Authorization for the Use of Military Force”—which enshrined the illegal doctrine of “preventative war”—gave blanket authority to the White House to attack any state it assessed as a potential threat to the military or economic interests of the American ruling class. This was followed by the passage of the Patriot Act, which created the legal framework for a police state in America.

In 2002, the Bush White House cited the “war on terror” as justification for CIA rendition and torture and the establishment of an extralegal prison at Guantanamo, Cuba, where prisoners could be held indefinitely, even for life, without any judicial proceeding. This was the corollary to a criminal policy of preventive war all over the world.

The Obama administration, which followed Bush, cited the same rationale for its escalating campaign of drone missile attacks, which targeted thousands for assassination at the orders of the president. Under both administrations, the US intelligence apparatus has been massively built up, systematically spying on the American population, monitoring all telecommunications and the Internet worldwide.

Meanwhile, the pattern of 9/11 has been repeated endlessly, in terrorist attacks from Paris to Brussels to London to Boston. In virtually every case of attacks by Al Qaeda or ISIS operatives or sympathizers, the perpetrators have been known to the security forces. They were free to carry out their bloody work for two reasons: their organizations were doing the bidding of imperialist foreign policy, particularly in Syria; and their atrocities confuse and stampede public opinion behind war, enabling the buildup of the forces of state repression, to be used against the working class.

The real motivation behind the response to 9/11 was not retaliation for the terrorist attacks. It was the establishment of a direct US military footprint in the heart of Central Asia and US dominance over the Middle East, the key oil-producing region of the globe. The result over the past 15 years has been the vast destabilization of international relations and the emergence of open US war preparations against China—the state Washington perceives as its greatest rival in Asia—along with escalating tensions with Russia, which is viewed as a threat to American dominance in both Central Asia and Europe.

As David North wrote in his Preface to the volume, A Quarter Century of War: The US Drive for Global Hegemony 1990–2016: “The last quarter century of US-instigated wars must be studied as a chain of interconnected events. The strategic logic of the US drive for global hegemony extends beyond the neocolonial operations in the Middle East and Africa. The ongoing regional wars are component elements of the rapidly escalating confrontation of the United States with Russia and China.”

In Eastern Europe, NATO forces are mobilizing for military confrontation with Russia, whether in the Baltic States, Ukraine, the Black Sea or the Caucasus. The same type of media campaign used to demonize Saddam Hussein, Gaddafi and Assad, in preparation for their US-backed overthrow, is now being directed at Russian President Vladimir Putin. Democratic presidential candidate Hillary Clinton is leading the charge, accusing Putin of cyber-sabotage of the US elections and attacking Republican Donald Trump as a Putin stooge.

In Asia, the Obama administration launched the US “pivot” to the region in 2011, redeploying the majority of US naval and air forces to battle stations where they can strike at China. The US Navy is conducting provocative “freedom of navigation” exercises against Chinese-held islets in the South China Sea, while Washington is encouraging Japanese militarism and threatening North Korea.

Whatever government comes to power in the United States as a result of the November 8 election, whether headed by Clinton or Trump, will continue and escalate the program of militarism, attacks on democratic rights, and economic austerity directed against the working class. The same agenda is being pursued by all the imperialist powers. That is all that the capitalist system, dominated by global economic and political crisis, has to offer.

—The WSWS editorial board

NOTE: ALL IMAGE CAPTIONS, PULL QUOTES AND COMMENTARY BY THE EDITORS, NOT THE AUTHORS
PLEASE COMMENT AND DEBATE DIRECTLY ON OUR FACEBOOK GROUP INSTALLATION
ABOUT THE AUTHORS
The WsWs editorial board, being part of the Social Equality Party, a Trotskyist formation, naturally urges people to join their ranks in this struggle.