Home ACTIVISTS & HEROES The Native American, the Palestinian: A Spirited Fight for Justice

The Native American, the Palestinian: A Spirited Fight for Justice 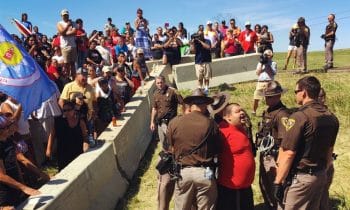 Editor's Note
Ramzy poignantly discusses the connections in the struggles of Palestinians and Native Americans, particularly in the struggles over water. The powers that be attempt to keep the assaults of life and culture in the darkness, and a central part of the struggle for change is to bring the conditions to the light. The Native American tribes are correctly arguing that this struggle is over water; water which is life for us all, but is of low concern to corporations who use and destroy it, put it at risk, all for profit

Thousands of Native Americans resurrected the fighting spirit of their forefathers as they stood in unprecedented unity to contest an oil company’s desecration of their sacred land in North Dakota. Considering its burdened historical context, this has been one of the most moving events in recent memory.

The standoff, involving 5,000-strong Native American protesters, including representatives of 200 tribes and environmental groups, has been largely reduced in news reports as being a matter of technical detail – concerning issues of permits and legal proceedings.

At best, both the tribes and the oil company are treated as if they are equal parties in a purportedly proportionate tussle.

“’Dakota’ means ‘friendly’ and yet, it seems, neither side has been too friendly to each other,” wrote Mark Albert in the website of the American broadcasting television network, CBS.

The Dakota Nation is justifiably alarmed by the prospect that its water supplies will be polluted by the massive pipeline, which will extend across four states and stretching over 1,100 miles.

The ‘other side’ is the company, Energy Transfer Partners, whose construction of the Dakota Access Pipeline at the cost of $3.7 billion is infringing upon the territorial rights of Native American tribes, destroying sacred burial grounds and threatening to pollute the main water sources of large communities of Native Americans.

Fear over future spills under the Missouri River is hardly a hype. The US is struggling with ongoing water crises, partly because of dilapidating infrastructure, but also because of numerous oil spills and natural gas leaks.

The recent water crisis in Flint, Michigan, and the BP oil spill earlier in the Gulf of Mexico – both resulting in massive humanitarian and environmental crises – are only two recent cases in point.

But the problem is far deeper and constantly worsening.

Data obtained by the news network, CNBC from the government’s Environmental Protection Agency showed that “only nine U.S. states are reporting safe levels of lead in their water supply. These include Alabama, Arkansas, Hawaii, Kentucky, Mississippi, Nevada, North Dakota, South Dakota and Tennessee.”

As if that is not worrying enough, the massive crude oil pipeline will be going across several of these states, likely shortening the list of these states even further.

Discussion about the potential risks of the construction of the pipeline has been rife for years. The issue, however, received national and international coverage when Native American tribes mobilized to protect their land and water resources.

The mobilization of the tribes has been met with state violence. Instead of appreciating the serious grievances of the tribes, particularly those in the Standing Rock Reservation – which is located only one mile away, south of the pipeline – the state governor summoned all law enforcement agencies and activated the National Guard. Mace was used on protesters; they were beaten, arrested and chased out by armed men in uniform.

In the United States, when the people stand up to corporations, it seems that, more often than not, state violence is galvanized against unarmed people to protect the big businesses.

But missing from this story is an essential component: the mobilization and unity among Native American tribes has been the most awe-inspiring in many decades. As chiefs and representatives of tribes from all across the United States kept arriving at the encampment grounds, the collective spirit of Native American nations was being vigorously revived.

In fact, the ongoing mobilization of Native American tribes is far greater than the struggle against a money-hungry Corporation, backed by an aggressive state apparatus. It is about the spirit of the Native people of this land, who have suffered a prolonged genocide aimed at their complete eradication.

To see them standing once more, along with their families, riding their feather-draped horses and fighting for their very identity is a cause for celebration. It brings hope to oppressed people all across the world that the human spirit will never be destroyed.

The genocide of the Native Americans, similar to the ongoing destruction of the Palestinian Nation, is one of the lowest points of human morality. It is particularly disheartening that there are yet to be serious attempts at addressing that grave injustice.

For 500 years, Native Americans witnessed every attempt at erasing them from the face of the planet. Their numbers dwindled from ten million prior to the arrival of Europeans to North America to less than three hundred thousand at the turn of the 20th century. They were exterminated by colonial wars and ravaged by foreign diseases.

Calls to destroy Native Americans were hardly implicit but, rather, clearly-articulated. For example, Spencer Phips, Lieutenant Governor of the Massachusetts Bay Province issued this statement in 1755 on behalf of King George II:  “His Majesty’s subjects to embrace all opportunities of pursuing, captivating, killing and destroying all and every of the aforesaid Indians.”

The price list for the scalp of murdered Natives were as follows: “50 pounds for adult male scalps; 25 for adult female scalps; and 20 for scalps of boys and girls under age 12.”

A century later, in 1851, California Governor Peter H. Burnett made this declaration: “A war of extermination will continue to be waged between the two races until the Indian race becomes extinct.

Methods of extermination differed, from outright murder to disease-infected blankets, to, as of today’s standoff, threatening their most viable resource: water.

Yet, somehow, the spirit of Sitting Bull and Crazy Horse and numerous brave chiefs and warriors still roam the plains, urging their people to stand up and carry on with an overdue fight for justice and rights.

Palestinians have always felt that the legacy of the Native Americans is similar to their own.

“Our names: branching leaves of divine speech;
birds that soar higher than a gun.
You who come from beyond the sea, bent on war;
don’t cut down the tree of our names;
don’t gallop your flaming horses across the open plains.”

These were a few of the verses in Palestinian poet’s Mahmoud Darwish’s seminal poem “Speech of the Red Indian.”

I recall the day that magnificent piece of Arabic literature was first published in full in Palestine’s ‘Al-Quds’ newspaper. At the time, I was a teenager in a refugee camp in Gaza. I read it with much trepidation and giddiness – carefully, slowly, and repeatedly.

Many tears were shed on that day, mostly because we all knew too well that we, in fact, were the ‘Red Indians.’ They were us.

Long before feminist critical theory coined the term ‘intersectionality’ – which contends that oppression is interconnected and one oppressive institution cannot be examined in isolation from others, Palestinians – as other victims of genocidal colonization – fully comprehended and held such a belief.

Palestinians are losing their lives, land and olive trees as they stand up to Israeli tanks and bulldozers. Their reality is a replay of similar experiences faced – and still being confronted – by Native Americans. Well into the 21st century, the Native American-Palestinian struggle remains one and the same.

“Our pastures are sacred, our spirits inspired,
The stars are luminous words where our fable
is legible from beginning to end..”

Wrote Mahmoud Darwish, of the Native Americans. Of the Palestinians.

BOTH MS. CLINTON AND I GOT BURNED OUT – FOR VERY DIFFERENT REASONS

FOR THE WEST THERE IS NO PRICE TOO...

Jon Stewart and the Pentagon honor...