Clinton appears on Between Two Ferns, gets roasted by Zach Gafiniakis—why?

PATRICE GREANVILLE
Why Hillary Clinton, a notorious “1%center”, put herself through this wringer is anyone’s guess. Personally I have some theories, but no real firm clues. So just read the possible explanations below the video, and run with it. I give her credit, though, for her aplomb in what could have been for many mortals a rather discombobulating moment, given Zach Ganifiakis’s skill at straight-face discombobulation.  Was it a set-up, previously rehearsed with the producers? Anything is possible in the world of politics, I mean make-believe.

Between Two Ferns With Zach Galifianakis: Hillary Clinton from Funny Or Die

Funny Or Die Presents Donald Trump’s The Art Of The Deal: The Movie Trailer

FUNNY OR DIE: DONALD TRUMP, THE ART OF THE DEAL
Funny Or Die Presents Donald Trump’s The Art Of The Deal: The Movie Trailer from Funny Or Die

Hillary Clinton personally pushed to make an appearance on “Between Two Ferns,” according to the director of the web series. 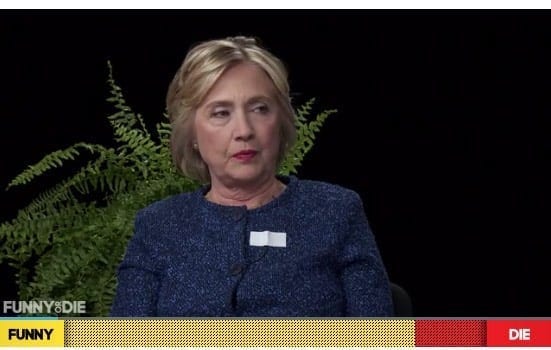 In an interview with The Daily Beast, director Scott Aukerman said Clinton wanted to participate because she had enjoyed an episode in which President Barack Obama was a guest. Obama appeared on the show to promote healthcare.gov, and many people did in fact flock to the site after the episode aired.

“The Clinton camp reached out to us and said that there was interest and what we found out later that it was actually her idea,” Ackerman said. “A lot of times with ‘Between Two Ferns’ if it’s someone in entertainment, their publicist will reach out. Or in the case of Obama, the White House reached out, and you never quite know if the person knows that their people are reaching out about it. But in this case, Mrs. Clinton is the one who reached out about doing it, as she was a big fan of the Obama one.”

Ackerman also revealed that Clinton enjoyed filming the show so much that she gave him and host Zach Galifianakis more time than they had initially been allotted. The interview was shot on Sept. 9, the same day that Clinton was diagnosed with pneumonia.

The show is built around Galifianakis asking his guests awkward questions. Past guests have included actors Natalie Portman, Brad Pitt and Steve Carell.

If Clinton was feeling under the weather, it didn’t affect her humor. She was quick with zingers and educated Galifianakis on the double standards women face. When the host asked whether Donald Trump would wear a white power tie to the debate, Clinton quickly said “that would be more appropriate.”

NOTE: ALL IMAGE CAPTIONS, PULL QUOTES AND COMMENTARY BY THE EDITORS, NOT THE AUTHORS
PLEASE COMMENT AND DEBATE DIRECTLY ON OUR FACEBOOK GROUP INSTALLATION

The Meaning of the Trump Surge