US Media as Conduits of Propaganda 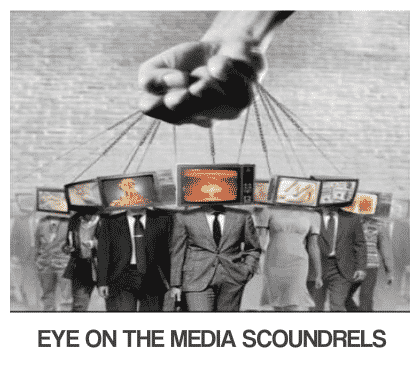 Exclusive: The “group think” about the Syrian government crossing President Obama’s “red line” in a 2013 sarin attack has collapsed, but The New York Times still reports it as flat fact, an industry-wide problem, writes Robert Parry.

Nothing disturbs me more about the modern mainstream U.S. news media than its failure to test what the U.S. government says against what can be determined through serious and impartial investigation to be true. And this is not just some question of my professional vanity; it can be a matter of life or death.

For instance, did Syrian President Bashar al-Assad cross President Barack Obama’s supposed “red line” against using chemical weapons, specifically in the sarin gas attack outside Damascus on Aug. 21, 2013, or not?

Upon this question rests the possibility that a future President Hillary Clinton will invade Syria under the guise of establishing a “safe zone,” a project that would surely expand into another bloody “regime change,” as occurred in Iraq and Libya amid similar U.S. claims about protecting “human rights.”

Yet, there is substantial evidence that Assad was not responsible for the sarin attack – that is was perpetrated by jihadist rebels as a provocation to draw the U.S. military directly into the war on their side. But it remains conventional wisdom that Assad ignored Obama’s “red line” and that Obama then flinched from enforcing it.

The New York Times and other major U.S. publication cite this “group think” about the “red line” as flat fact, much as many of them reported without doubt that Iraq’s Saddam Hussein was hiding WMD, reinforcing the pretext for the U.S. invasion of that country in 2003.

On Wednesday, Times correspondent David E. Sanger wrote an article about the need for a coercive “Plan B” to force Assad from power and added that “president [Obama] has repeatedly defended his decision not to authorize a military strike against Mr. Assad after he crossed what Mr. Obama had described as a ‘red line’ against using chemical weapons.”

We admire the work done by honest veteran journalists like Robert Parry, an almost extinct species, and certainly agree with all his conclusions. But Parry’s head-scratching about why the American media, in fact the global capitalist media, behave in the abominable the way they do, is a bit naive for a man of his experience. There is no mystery as to the reason why the US media do as they do, and it’s not a matter of personalities, perversity, or whimsy, but simply a sense of disciplined mutual class interest in advancing a narrative that favors their owners, the world’s elites, the 0.00001% that runs most governments, who own most that is there to own, and who are zealously led and shielded by the muscle of the US and its propaganda machinery. Simple as that. As the American masses have become more ignorant and passive—”dumbed down”—and disorganized and demoralized due to the constant administration of lies and political and economic setbacks, the ruling circles have grown accustomed to doing whatever they damn please with nary a worry about possible retribution.  Under such conditions, the ruling class interest in the bloc of nations controlled and influenced by the US, stands naked, defiant in its corruption, here at home and across the globe.—PG

Note that there is no attribution to that claim about Assad crossing the “red line,” no “allegedly” or “widely believed” or any modifier. Assad is simply judged guilty by The New York Times, which — in doing so — asserts this dubious narrative as flat fact.

Yet, the Times hasn’t conducted a serious investigation into whether Assad is, in fact, guilty. Their last stab at proving Assad’s guilt in late 2013 collapsed when it turned out that the one missile found to have carried sarin had a range of only two kilometers, less than a quarter of the distance from which the Times had alleged that Assad’s military had fired the rocket.

Faced with that evidence, the Times essentially retracted its findings in a little-noticed article buried deep inside the paper during the Christmas-New Year holidays. So, even as the case collapsed, the Times maintained its phony narrative, which it reprises regularly as happened in Sanger’s article on Wednesday.

[dropcap]B[/dropcap]ut what does that do to the Times’ readers? They are essentially being propagandized by the “paper of record,” with a questionable assertion slipped past them as an incontrovertible “fact.” How are they supposed to evaluate whether the U.S. government should launch another war in the Middle East when they have been told that a dubious claim is now enshrined as a basic truth in the Times narrative?

We saw something similar earlier this year when Jeff Goldberg of The Atlantic wrote a lengthy articleon Obama’s foreign policy focusing on his 2013 decision not to launch punitive airstrikes against the Syrian military for the sarin attack.

The opus contained the remarkable disclosure that Director of National Intelligence James Clapper had told Obama that U.S. intelligence lacked “slam dunk” evidence that Assad was guilty. In other words, Obama pulled back in part because he was informed that Assad might well be innocent.

Later in the same article, however, Goldberg reverted to Official Washington’s “group think” that held as a matter of faith that Assad had crossed Obama’s “red line.” That false certainty has proved so powerful that it defies any contrary evidence and keeps popping up as it did in Sanger’s article.

Which gets me to one of my pet peeves about modern America: we almost never get to the bottom of anything, whether significant or trivial. Often there’s “a conventional wisdom” about some issue but almost never is there a careful assessment of the facts and an unbiased judgment of what happened.

On the trivial side, we have the NFL accusing New England Patriot quarterback Tom Brady of participating in some scheme to deflate footballs, even though the scientific and testimonial evidence doesn’t support the claim. But lots of people, including The New York Times, assume the allegations to be true even though they come from one of the most disreputable and dishonest corporations in America, the National Football League, which has recently been exposed for covering up the dangers of concussions.

On more substantive matters, we never see serious investigations into U.S. government claims especially when they’re aimed at “enemies.” The failure to test President George W. Bush’s claims about Iraq’s WMD cost hundreds of thousands of lives, including those of nearly 4,500 American soldiers, and has spread chaos through much of the region and now into Europe.

A Pattern of Neglect

[dropcap]W[/dropcap]e’ve seen similar neglect regarding Syria’s sarin case and events in Ukraine, from the mysterious sniper attacks that touched off the coup in February 2014 to the shoot-down of Malaysia Airlines Flight 17 over eastern Ukraine on July 17, 2014.

Arguably, the fate of humankind rests on the events in Ukraine where U.S. propagandists are stirring up the West to engage in a military conflict with nuclear-armed Russia.

So, shouldn’t The New York Times and other major publications take special care not to feed a war fever that could exterminate life on the planet? Can’t they find the time to undertake serious examinations of these issues and present the evidence without fear or favor?

But that apparently isn’t how the editors of the Times or The Washington Post or any number of other major U.S. news outlets view matters. Instead of questioning the stories coming from the U.S. government’s propaganda shops, the mainstream media simply amplifies them, all the better to look “patriotic.”

If instead these outlets joined some independent journalists and concerned citizens in demanding that the U.S. government provide verifiable evidence to support its claims, that might force many of these “artificial secrets” out into the open.

For instance, we don’t know what the current U.S. intelligence assessments are about the Syria-sarin attack or the MH-17 shoot-down. Regarding the MH-17 case, the U.S. government has refused to divulge its overhead surveillance, radar and other technical evidence about this tragedy in which 298 people were killed.

If there was some journalistic unity – refusing to simply blame the Russians and instead highlighting the lack of U.S. cooperation in the investigation – the U.S. government might feel enough heat to declassify its information and help bring whoever shot down the plane to justice.

As it stands now on these issues, why should the U.S. government reveal what it actually knows when all the major news outlets are accepting its dubious propaganda themes as flat fact?

The Times and other big media outlets could contribute to the cause of truth by simply refusing to serve as conduits for unsubstantiated claims just because they come from senior U.S. government officials. If the mainstream media did, the American people and the world public might be much better informed — and a lot safer. 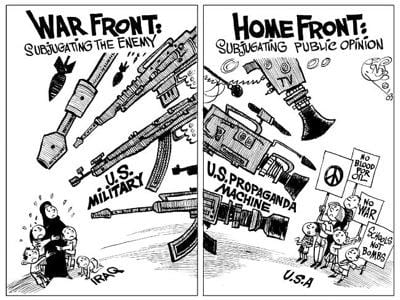 PLEASE COMMENT AND DEBATE DIRECTLY ON OUR FACEBOOK GROUP INSTALLATION
ABOUT THE AUTHOR
Investigative reporter Robert Parry broke many of the Iran-Contra stories for The Associated Press and Newsweek in the 1980s. You can buy his latest book, America’s Stolen Narrative, either in print here or as an e-book (from Amazon andbarnesandnoble.com).