[su_panel background=”#f9f8f6″ color=”#1d1919″ border=”2px solid #cecaca” shadow=”7px 0px 1px #eeeeee” radius=”2″]Turkey’s two top leaders have both indicated that, if the U.S. Presidential candidate Hillary Clinton becomes elected as the U.S. President on November 8th, then Turkey, which is NATO’s only Muslim-majority member-nation, will have little alternative but to leave NATO and ally itself with Russia, in America’s movement towards war against Russia (which then would mean also war against Turkey).[/su_panel] 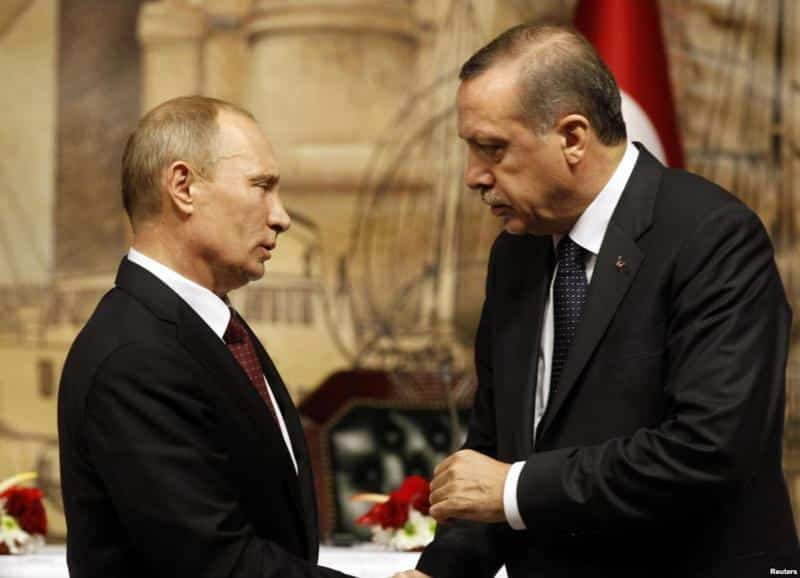 Despite all the rumors about deteriorating relations between Erdogan and Washington, we must always take such assertions with a huge lump of salt (good news for the world). The empire still has enormous resources to seduce and compel other players to do its criminal bidding, and Erdogan is not exactly reliable partner, to put it charitably.

Turkey’s Anadolu News Agency headlined on October 12th, “Clinton remarks on arming PYD/PKK unfortunate: Erdogan”, and reported that “President Recep Tayyip Erdogan Wednesday criticized U.S. presidential candidate Hillary Clinton’s remarks on arming Syrian Kurds as ‘unfortunate.’ Clinton said, ‘We will continue to support the PYD and YPG.’ [Those are Kurdish political organizations, and the YPG is openly fighting to produce a Kurdish nation, which would remove valuable land and resources not only from Turkey, but from Syria, and also from Iraq, and maybe also from Iran.] ‘This is a very unfortunate statement,’ Erdogan said.” This assertion by Erdogan followed an even stronger statement by Turkey’s Prime Minister the day before, as follows:

To state the matter simply here: Turkey’s leaders are viscerally opposed to Clinton’s repeated support for allowing Kurds to break away and to form their own independent nation, which breakaway would constitute a grave threat to Turkey. A previous pan-Kurdish statement by her was at the Council on Foreign Relations, where she urged (as she often has) that a “no-fly zone” be imposed in Syria, and that “we’ve got to work with the Kurds on both sides of the border, we have got to figure out how to, if possible, have a second Arab Awakening” — and she was saying this on 19 November 2015, after Russia had already begun its bombing campaign in Syria on 30 September 2015 and thus most of the warplanes that were bombing in Syria were Russian ones and America’s imposing a “no-fly zone” would thus mean that the U.S. would be shooting down Russian bombers, which would mean World War III. Furthermore, though she was fond of the “Arab Spring” because it had started the jihadists coming into Syria and the war in Syria, which she hoped to win as the U.S. President, most of the people who live in that region aren’t fond of the ‘Arab Spring’ at all.

Apparently, Turkey’s government has already had more than enough of Hillary Clinton.

Ever since the Turkish government defeated the military coup-attempt on 15 July 2016 that was aimed at replacing Turkey’s democratically elected leaders with leaders who would adhere to the U.S.-CIA-supported exiled-in-America Fethullah Gulen, the governments in Washington and Ankara have been having extremely strained relations, but Hillary Clinton would be an even worse U.S. President, from Turkey’s standpoint, than Barack Obama is. Obama and Clinton and the Saudi royals want to break up Turkey (and Syria, and Iraq, etc.), but Erdogan and Yildirim don’t.

As another Anadolu news-report noted on October 12th, “During his speech, the prime minister said the main opposition Republican People’s Party (CHP) ‘is falling for’ the Fetullah Terror Organization (FETO)’s claims of being unjustly treated.” The existing leadership of Turkey has made clear that they view the recent coup-attempt as a CIA-initiated operation, and don’t like it. As I had reported earlier, on 18 August 2016, headlining “What Was Behind the Turkish Coup-Attempt?” Erdogan and Yildirim not only know the answer to this question — that the U.S. government was behind it — but they almost certainly would be dead by now if Russia’s President Vladimir Putin hadn’t informed Erdogan just ahead of the coup, that it was about to happen. (Russian intelligence is very good even if American intelligence — or else the selective use of it by a traitorous President — produces results such as the 2003 invasion of Iraq.) So, ever since July 15th, Turkey has greatly increased its defenses against the United States; and Turkey’s leaders understand why creation of a Kurdistan would be terrible for Turkey, as well as for Iraq and Syria; and, that the CIA has wanted it ever since at least 1949. Thus, on July 16th (the day after the Turkish coup), there were “agreements reached, and recent U.S. commitments to provide direct military aid and financing of $415 million” which “is further evidence of the importance of the Kurds”; and, on July 18th, “US to Set Up 5 Military Bases in Iraqi Kurdistan Region”. It’s not because the U.S. aristocracy love Kurds, or love the Turkish public, or love the Iraqis, that America’s aristocracy want the existing Turkish government (not just Syria’s) overthrown; it’s all for oil-and-gas operations that America’s billionaires can then take a chunk of, such as by building the pipelines and marketing the oil and gas into Europe.

[dropcap]T[/dropcap]he American public might not know these things, but Turkey’s leaders do, and America’s leaders do, and Russia’s leaders do. And so does Hillary Clinton — President Obama’s chosen heir. After all: she is the person that America’s current President wants to be his successor. If she doesn’t become his successor, then his entire historical legacy (his service to America’s oligarchs) will be flushed away, and this is especially true with regard to his foreign policy, including isolating Russia and China, including his TPP and TTIP ‘trade’ treaties for that purpose and for giving control to the international corporations. She is just as determined to conquer Russia and to aid her financial backers as he is.

The loss of Turkey in that conquest-effort is a major setback for the U.S. aristocracy.

America’s Associated Press headlined on October 10th, “Turkey, Russia Sign Gas Pipeline Deal as Ties Improve”, and opened by saying that those two nations were engaging in “efforts to normalize ties,” and, so: “Russian President Vladimir Putin and Turkish President Recep Tayyip Erdogan watched as their countries’ energy ministers sealed an intergovernmental agreement for the ‘Turkish Stream’ project that would bring gas from Russia to Turkey. It would then be distributed to European Union nations.” Nothing was said there about the U.S. coup-attempt nor about any of the other relevant background for understanding this, such as its being the beginning of the end of the Obama-phase in the CIA’s effort, ever since 1949, to overthrow the secular Syrian government, in order to install a fundamentalist-Sunni, pro-Saudi (Sharia-law), government in Syria, to enable the Sauds’ oil and the Thanis’ (Qatar’s) gas to be pipelined through Syria into Europe, to replace Russian oil and gas there.

If Turkey were to quit NATO, then the entire post-WW-II international order would be reorganized so that the U.S. government would no longer have a stranglehold against other nations. This wouldn’t directly affect the United Nations (FDR’s creation), but it would directly affect practically everything else (it would end Winston Churchill’s creation — which George Herbert Walker Bush and all subsequent U.S. Presidents kept going until now — the Cold War). As to why this is happening at the present moment: the only way that the U.S. aristocracy can continue any further to conquer Russia is by turning America’s Cold War into World War III, and some allied aristocracies are refusing to go that far. Turkey is just one example of this refusal, but, until Putin saved Erdogan’s life on July 15th, Turkey was part of Washington’s plan, not another enemy against it.

The current U.S. Presidential contest is, more than anything else, about whether to continue the Cold War (which, after 1990, has been a one-sided U.S. war against Russia, no longer a two-sided ideological war), into nuclear war. That’s what it’s really all about, though the American public haven’t yet been informed, except about the small issues and the non-‘issues’, which occupy most of the ‘debates’ in America’s ‘election’.

Almost no reporting is published on the real issues, but the real issues will be the important ones in retrospect, if there will be a retrospect. This isn’t to say that the other issues aren’t also significant, but only that they’re far less important than is the question: WW III — yes or no. And, furthermore, the published discussions of the lesser issues are highly deceptive, so that the public is voting largely on the basis of falsehoods anyway.

On 22 November 2015, the pro-Republican “Daily Caller” website headlined “Followers Of A Mysterious Turkish Islamic Cleric Have Donated Heavily To Hillary’s Campaign And Family Charity” and reported that, “A former president of the Gulen-linked Turkish Cultural Center, Ozkan gave between $500,001 and $1,000,000 to the Clinton Foundation in recent months, the charity’s website shows. He also served as a national finance co-chair last year for a pro-Clinton political action committee called Ready PAC.”