A young man, wearing a white helmet and a distinctive yellow-and-blue badge on his arm, digs for four hours in the rubble of a destroyed building in Idlib Province in northwest Syria. Finally, he sees what he’s looking for: an infant. He takes her to an ambulance like she is his own child.

This is how the Western media portray the volunteers of Syria Civil Defense, also known as the White Helmets. But how does the reality look like?

It’s not a secret that since the Syrian crisis began in 2011, dozens of NGOs have been set up. As a rule, these organizations have a pretty title and stand for the rights and freedoms of the Syrians while providing some humanitarian aid.

In 2012, these organizations list had Syrian Civil Defense included. It was founded by a former British intelligence officer and private security specialist James Le Mesurier who took part in various conflicts around the world including Iraq, Lebanon and Palestine.

In a few years, Syrian Civil Defense turned from an NGO into a structure with its own uniform, symbols and even vehicles. It has 119 centers across whole Syria: in Aleppo, Idlib, Latakia, Homs, Hama, Damascus. 2016 even saw an attempt to nominate the White Helmets for Nobel peace prize. However, only few remember that its volunteers appeared exactly in the areas captured by the opposition and refused to let there the representatives of Red Crescent and Red Cross.

The Helmets claim that their organization is an unbiased humanitarian NGO, without any official allegiance to a political party or military group. 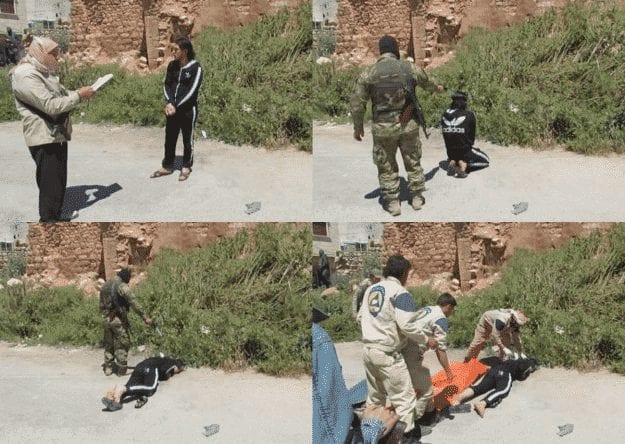 [dropcap]A[/dropcap]longside, the Helmets receive vast donations from various governments – the UK, Germany, Denmark, and the Netherlands. But their biggest donor is US Agency for International Development (USAID) financing NGOs across the world. In April of 2016, US State Department Spokesman Mark Toner confirmed that since 2013 the agency granted the Helmets at least $23 million.

Obviously, receiving such donations Syrian Civil Defense will have to promote the interests of those countries which invest in it. A bright example is the Sept. 19 attack on the UN humanitarian convoy by Aleppo. The White Helmets volunteers “accidentally” appeared by the site and were first to report about the attack and immediately accused the Syrian and Russian aviation.

The volunteers allegedly found some air bombs pieces and saw Syrian helicopters by the site. This information was cited by London-based Syrian Observatory for Human Rights. Then, the US government made a conclusion based on the so-called Syrian NGO’s report.

Unfortunately, some prominent faux-anti imperialists, like AVAAZ and Democracy Now! have apparently fallen for the ruse, or knowingly collaborate with the empire on this highly dangerous propaganda maneuver. The “Left Leg of NATO” is obviously very much alive.

A peculiar fact is that humanitarian activists turned up in an area controlled by Jabhat al-Nusra terrorist group. But if we look deeper everything becomes clear.

Vanessa Beeley, a British expert focused on the Middle East, says the While Helmets are forming an environment for the US and its allies’ military invasion into Syria and are collaborating with various terrorist groups.

According to her, the organization operates in the areas controlled by Jabhat al-Nusra and not just ignores the crimes committed by terrorists but is trying to create a favorable image of them in the media.

For instance, another proof of a link between the Helmets and terrorists is the fact that on April 20, 2016 the head of the organization Raed Saleh was refused entry arriving in the US where he came to receive an award from InterAction, an alliance of aid agencies. According to the official version, his visa expired but New York Times supposed he was recognized as a terrorist suspect.

“The Helmets receive vast donations from various governments – the UK, Germany, Denmark, and the Netherlands. But their biggest donor is US Agency for International Development (USAID) financing NGOs across the world…Vanessa Beeley, a British expert focused on the Middle East, says the While Helmets are forming an environment for the US and its allies’ military invasion into Syria and are collaborating with various terrorist groups…”

Moreover, many White Helmet activists are the members of armed groups. There is much evidence of their sympathy towards not just the opposition but terrorists. Helmets are fond of sharing photos and comments on Twitter and Facebook showing who really works in the so-called Syrian Civil Defense.

It becomes clear that the White Helmets are not just a humanitarian organization but a cover used to support the militants of various terrorist groups. Besides, the Helmets can be used to disseminate the required fake information: Civil Defense activists constantly publish on their Twitter the photos of hospitals, schools and mosques bombings allegedly carried out by the Syrian AF and its allies. Then, there comes a turn for Observatory for Human Rights and several Western media.

However, experienced journalists bring into question the White Helmets’ information verity. An independent Italian Journalist Marinella Correggia found out that no medical organization ever stated that any of its structure was hit during the attacks of the Syrian or Russian AFs. Not a single building damaged or destroyed by bombings had the required identification signs. The Italian researches came to conclusion that these buildings located near militant groups were terrorists’ field hospitals and had no connection with any state’s healthcare system or international organizations like Red Cross.

Clearly, the information about the attack on the UN convoy near Aleppo and other crimes allegedly committed by the Syrian AF and its allies provided by the Helmets is rather doubtful. The investigation the UN is planning to start must be based not on the Helmets’ allegations but on the objective information provided by all sides of the conflict.

Thus, the Western-media-created image of a savior wearing a white helmet disappears and reality is exposed: the uniform of a humanitarian organization is worn by people who sympathize with terrorists.

NOTE: ALL IMAGE CAPTIONS, PULL QUOTES AND COMMENTARY BY THE EDITORS, NOT THE AUTHORS
PLEASE COMMENT AND DEBATE DIRECTLY ON OUR FACEBOOK GROUP INSTALLATION
ABOUT THE AUTHOR
Ahmad Salah is a freelance journalist operating inside Syria and close to the actions he reports on.

=SUBSCRIBE TODAY! NOTHING TO LOSE, EVERYTHING TO GAIN.= SEE OUR REGISTRY PANEL AT THE BOTTOM OF THE PAGE=
free • safe • invaluable

THE SAKER: By way of deception thou shalt lose your Empire