The Liberation of Aleppo: A Regional Turning Point. Setback for US-Led Aggression

ABOVE IMAGE: BEAUTIFUL AND PRICELESS ALEPPO, SYRIA, ONE OF THE OLDEST CITIES IN THE WORLD, ALIVE 3,000 YEARS BC, AND A TREASURE FOR HUMANITY, IS NOW MOSTLY RUINS THANKS TO THE CRIMES AND INTRIGUES OF WASHINGTON AND THE CLIQUES OF BARBARIC BILLIONAIRES IT REPRESENTS.

In late 2016, at the cost of many young lives, Syrian forces took back the eastern part of the city of Aleppo, occupied by NATO and Saudi backed terrorists for more than four years.

LET ALEPPO BE THE NEW STALINGRAD FOR THE FORCES OF EVIL THAT ARE RUINING OUR WORLD.

The liberation of Aleppo, Syria’s second city and an ancient marvel, represents the most serious setback for the 15-year long Washington-led aggression on the entire region. An effective recolonisation of the region has stretched from Afghanistan to Libya, under a range of false pretexts. Invasions and proxy wars have been backed by economic sanctions and wild propaganda.

But this great war of aggression – called the creation of ‘New Middle East’ by former US President George W. Bush – has hit a rock in Syria. The massive proxy armies bought and equipped by Washington and its regional allies the Saudis, Turkey, Qatar and Israel, have been beaten back by a powerful regional alliance which supports the Syrian nation.

The endgame in Aleppo involves a handful of foreign agents – US, Saudi, Israeli and others – said to remain with the last al Qaeda groups in a tiny part of what was once their stronghold. The US in particular is keen to secure their release, because their presence is further evidence of the foreign command of what was claimed to be a ‘civil war’.

After a storm of western government and media misinformation (claims of massacres, mass executions and ‘civilians targeted’) over the evacuation of around 100,000 civilians and many thousands of terrorists, the UN Security Council authorised some ‘independent observers’ to monitor the process. However most of that evacuation is now over. Resettlement and reconstruction is already underway, and army reserves have been called up to defend the city.

Syrian, Iranian, Russian and independent reporters (including Maytham al Ashkar, Shadi Halwi, Asser Khatab, Khaled Alkhateb, Ali Musawi, Lizzie Phelan, Murad Gazdiev, Vanessa Beeley, Eva Bartlett and the late Mohsen Khazaei) have already told us quite a lot. What they said bore little resemblance to the western apocalyptic stories. For example, outgoing UN Secretary General Ban Ki-Moon, a close ally of Washington, claimed in his last press conference that ‘Aleppo is now a synonym for hell’. Those claims were based on stories from NATO’s desperate jihadists.

Reporters on the ground told a different story. As Syrian forces smashed the al Qaeda lines, the trapped civilians streamed out. They published video of long lines of people leaving east Aleppo and finding relief, food and shelter with the Syrian Arab Army. Tired and relieved, they told their stories to anyone who cared to listen. Russia and Iran gave many tonnes of food, clothing, blanket and shelter aid. By contrast, western countries generally gave nothing and the terror groups rejected all aid from the Syrian alliance.

Civilians were prohibited from leaving the al Qaeda enclave, many were shot dead when they tried to do so. The armed gangs had food reserves but kept it for their fighters. Arms factories including toxic chemicals were found and were being made safe. Some of the armed men were taken into custody, but most were shipped out to Idlib, where Damascus has been concentrating the foreign-backed fighters.

The endgame in Aleppo involves a handful of foreign agents – US, Saudi, Israeli and others – said to remain with the last al Qaeda groups in a tiny part of what was once their stronghold. The US in particular is keen to secure their release, because their presence is further evidence of the foreign command of what was claimed to be a ‘civil war’.

When the hell canons fell silent, and no more home-made gas cylinder mortars landed in the heart of the city, there was elation and dancing in the streets, shown widely on social media. The US State Department spokesman claimed he had not seen this.

Al Qaeda in Aleppo was crushed. All the anti-Syrian government armed groups in Aleppo were either the ‘official’ al Qaeda in Syria (Jabhat al Nusra aka Jaysh Fateh al Sham) or deeply embedded associates. When the US pretended to suppress Jabhat al Nusra in 2012 and 2016, all the ‘Free Syrian Army’ groups protested, saying ‘we are all Jabhat al Nusra’. One might have thought that the US Government – which once claimed to be engaged in a global war against terrorism, in the name of 3,000 people murdered in New York back in September 2001 – would be as elated as those on the streets of Aleppo. They were not.

Much of the western media, reflecting their governments, solemnly reported on ‘the fall of Aleppo’. The Syrian victory over the al Qaeda groups was a great tragedy, they said. On the other hand, the near simultaneous recapture of Syria’s ancient city of Palmyra, by the eastern al Qaeda group ISIS, was reported differently. That city was said to have been ‘retaken’. 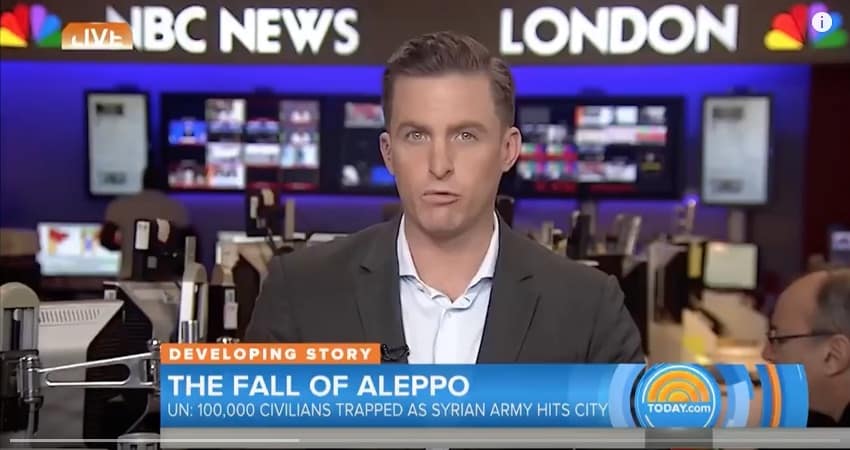 NBC, which along with its sister networks reported the liberation of Aleppo from terrorists as a thing to be regretted by humanity—once again the world upside down—has been shameless in serving disinformation about Syria to the US and Western publics. Here’s this moron, wittingly or unwittingly, faithfully tending the favored spin, “the flight of civilians” implicitly terrorised by their own liberators. Absurd.

All this underlines what should have been an obvious point, admitted by many US officials, that every single armed group in Syria (whether ‘moderate’ or ‘extremist’) has been armed and financed by the US and its allies, in an attempt to overthrow the Syrian Government. All the talk about ‘moderate rebels’, a ‘brutal regime’ and a ‘civil war’ just tries to hide this.

The final evacuations of Aleppo – which included an exchange of civilians besieged for 20 months in the Idlib towns of Faoua and Kafraya for remaining NATO-jihadists in eastern Aleppo – were organised between Russia and Turkey. There was some serious sabotage of these agreements, but the understandings have so far stayed on track. Now Iran is engaged with Russia and Turkey, in three way talks. Practical matters are being discussed.

It is notable that the Obama administration is playing no direct constructive role in the endgame over Aleppo. Its ‘regime change’ proxy war on Syria is failing and, in its place, the incoming Washington regime promises a new approach. More importantly, a new regional alliance has formed to reject any new aggression from the colonial powers.

Many things have changed during the war on Syria. The Syrian alliance has beaten back powerful NATO-GCC forces. The Muslim Brotherhood and its patrons in Egypt, Qatar and Turkey have received another beating. Egypt and Iraq now support Syria. The Saudis have joined with Israel against Iran and Syria. Russia has built stronger bonds with Syria and Iran. The Arab League, having backed the destruction of two Arab states, seems all but dead. Will the new, enhanced ‘Axis of Resistance’ take its place? 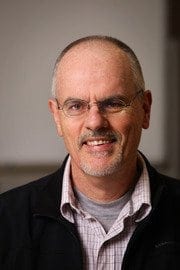 Professor Anderson, an Australian, has degrees in economics and international politics, and a doctorate on the political economy of economic liberalisation in Australia. His current research interests relate to (i) Development strategy and rights in development, (ii) Melanesian land and livelihoods, and (iii) Economic Integration in Latin America.

Mourning ceremony in Ankara as Russian Ambassador is Taken to Moscow

Trekking to the Capital of ‘Isolated Russia’