Sheroes and heroes are people who take risks, who make great personal sacrifices to perform difficult and important duties for others. By that standard John Lewis and the six hundred who walked that bridge in Selma Alabama 52 years ago are heroes whose actions helped pass the Voting Rights Act of 1965. Let’s agree on that.

But how long should that hero pass last? How many years, how many decades do you get to to boast and roast and toast and coast before you need to do something else even mildly heroic to keep your status current? 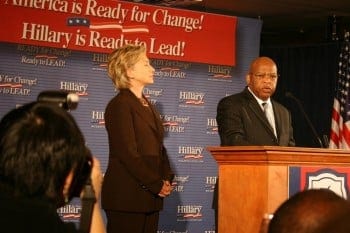 It’s not like Lewis has lacked new chances to serve the people this last half century. He’s represented a metro Atlanta district in Congress the past 28 years. Ruled by black mayors and the black political class since 1973, Atlanta has billed itself as “Black Mecca [6]” though for more than half of black Atlanta there’s been little [7] to celebrate. Black mayors have relentlessly gentrified [8]the city, starting with the Carter Presidential Library in the 80s, the Olympics in the 90s, and after that demolition of public housing [9], privatization of the land under it, and the BeltLine [8] project which steals $150 million annually from Atlanta’s public schools to build yuppie housing and shopping destinations. Marquee “development” projects have driven a six figure number of poorer black residents from the city. John Lewis never says a mumbling word about any of this. John Lewis never publicly contradicts the black Atlanta mayors who crack down on the homeless [10], who line up for the privatization of public property[11], public transit [12] and public schools [13]. Perhaps being a Legendary Civil Rights Hero puts him above all that.

Supporting Hillary Clinton last year, Lewis spoke out against free health care and free college tuition [14] which many countries grant their young people, explaining that “free stuff” was just not the American Way. Lewis was also an early member of the Democratic Leadership Council, which irretrievably locked that party into subservience to its one percenter donors.

Sometimes members of Congress can undo historic wrongs. Lewis blew one such chance when he doubled down [15] upon the expulsion of the descendants of black freedmen from the Cherokee nation in which they had once enjoyed voting rights.

John Lewis calls himself a pacifist and never misses a chance to lecture on the supreme utility of nonviolence. But the US Navy is building a ship with his name on it [16], a “fleet replenishment oiler” to resupply warships on deployment. Isn’t this an “honor” a pacifist should reject? And shouldn’t our Apostle of Non-Violence vote against every arms giveaway, sale and Pentagon budget? John Lewis doesn’t. Like most other members of the Black Caucus Lewis votes to fund mass surveillance [17] and re-arm the apartheid state of Israel with depressing regularity.

Supporting Hillary Clinton last year, Lewis spoke out against free health care and free college tuition [14] which many countries grant their young people, explaining that “free stuff” was just not the American Way. Lewis was also an early member of the Democratic Leadership Council, which irretrievably locked that party into subservience to its one percenter donors.

It’s time to ask whether Civil Rights Hero status from 52 years ago is really enough to cancel out or ignore all this, and what purpose John’s Hero status serves today. John Lewis is in the news now because he called Big Cheeto’s presidency “not legitimate.” But why?

Is it because Lewis fears Trump will pursue more than 6 bloody wars, that he will deport millions of innocents, expand mass surveillance and militarized policing? Is it because Lewis knows the Donald will help greedy banksters stay out of jail and he’ll enable hedge fund parasites to gentrify, plunder and privatize public education, nature and the commons? Probably not, because these are all Obama policies which Trump is expected to double down on.

John Lewis’s problem with Trump is that the CIA and FBI, which helped assassinate King and cover it up says that Russia helped elect him, and Lewis believes it. Big Cheeto did a Twitter fight with Lewis the other day and some of his followers called Lewis the n-word.

So now the Obama/Hillary liberals are flogging John Lewis’s tattered sainthood [18] as hard as they can, to have a #NotMyPresident message that draws attention away from [19] the many matters on which Republicans and the Obama/Hillary liberals agree. The old Civil Rights Hero does not oppose Trump for any reason which might lead to questioning past, present or future Democrats. Lewis is warming up the crowd for Obama’s exit and the entrance of whoever the Democrats run next.

This is what happens when there is no time limit on those Legendary Civil Rights Hero credentials. Time to revoke them.

For Black Agenda Radio, I’m Bruce Dixon. Find us on the web at Black Agenda Report dot com, or follow us on Twitter @blkagendareport. Thanks for listening.

NOTE: ALL IMAGE CAPTIONS, PULL QUOTES AND COMMENTARY BY THE EDITORS, NOT THE AUTHORS • PLEASE COMMENT AND DEBATE DIRECTLY ON OUR FACEBOOK GROUP CLICK HERE
Bruce A. Dixon is managing editor at Black Agenda Report and a member of the state committee of the GA Green Party. He lives and works near Marietta GA and can be reached via email at bruce.dixon@blackagendareport.com [20], or via Twitter at @brucedixon.

Six Things We Should Do Better As Everything Gets Worse