Much more than the fate of Julian Assange of WikiLeaks rests on last Sunday’s general elections in Ecuador. As Al Jazeera framed the election, “socialism is on the line.”

Having ducked into Ecuador’s London embassy in 2012 to seek political asylum, Assange has been unable to leave for fear of being extradited to the US. The right-wing candidates in Ecuador’s presidential race promise to send Assange packing.

On a broader geopolitical scale, the so-called Pink Tide in Latin America has been receding after a decade of success by left-leaning governments in raising living standards for the poor and creating regional alliances independent of the US (e.g., ALBA, UNASUR, CELAC).

A commodities boom had buoyed the Pink Tide, allowing Latin American left-leaning governments to increase social spending. Then oil and other commodity prices crashed, eroding the ability of these governments to serve their constituents.

President Fernando Lugo of Paraguay went down in 2012, a victim of a parliamentary soft coup. President Dilma Rouseff of Brazil suffered a similar soft coup last August. Meanwhile a right-wing government replaced a left-leaning one in an election in Argentina, and a hard right government took over in Peru.

In December 2015, the right-wing MUD coalition won a supermajority in the Venezuela’s unicameral legislature. Since, the left Bolivarian Revolution government of President Maduro has soldiered on in Venezuela, while the new Trump administration in the US vowed to continue Obama’s regime change policy.

A year ago, leftist President Evo Morales of Bolivia lost a referendum to have his term limit extended.

A peace plebiscite to end the over 50-year civil war in Colombia lost by less than a percentage point last October. Subsequently, the US-back government and the left-wing FARC insurgents have proceeded with a peace plan, though the government’s participation has been questionable and right-wing paramilitaries have ignored the peace.

In January, the US-backed candidate prevailed in a blatantly fraudulent presidential election in troubled Haiti.

Ecuador was among the hardest hit in the hemisphere by the crash in oil prices, coupled with the world recession of 2009 affecting remittances from abroad. The left government in Ecuador also faced fierce domestic opposition from economic elites, joined with reactionary factions in the Indigenous movement and some ultra-left elements.

Yet Ecuador emerged as a left-wing success story, according to Mark Weisbrot writing in The Nation. This was accomplished in the face of an active regime change policy on the part of the US and at least one unsuccessful coup attempt on President Rafael Correa.

Correa’s Alianza PAIS government achieved a 38% reduction in poverty and a 47% reduction in extreme poverty over the past decade. Social spending as a percentage of GDP more than doubled.

All hangs in balance with the elections in Ecuador. 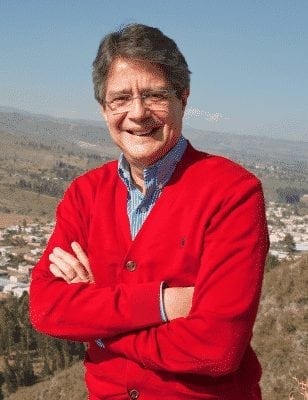 Guillermo Lasso: The Neoliberal heir. Ready to roll back all of the people’s gains. Every nation (as long as capitalism exists) will have anti-democracy fifth columnists like this. What Latin American call “vendepatrias” (traitors to the motherland).

The leading right-wing presidential candidate Guillermo Lasso boasted, “There’s no doubt that Ecuador is the next country where the bells of liberty will ring again in Latin America.” In other words, Lasso would reverse the social gains with neoliberal shock therapy if elected.

Lasso also promises to eject Assange from the embassy. The multi-millionaire banker is running on a platform of drastically reducing taxes for the wealthy, including a capital gains tax on extraordinary profits.

Cynthia Viteri, the second leading right-wing candidate, likewise promises to slash taxes and evict Assange. She cites the costs of housing Assange in the embassy, which otherwise could go to children’s school lunches. Viteri formerly served as public relations manager for the richest man in Ecuador.

Correa’s former vice president, Lenin Moreno, is the presidential candidate of the left-wing Alianza PAIS. Moreno shares his first name of Lenin with 18,000 other Ecuadoreans. Campaigning from a wheelchair, Moreno could become the first paraplegic head of state in Latin America.

Moreno must garner at least 50% to become president on the first round of voting. Failing a clear majority, Moreno needs at least 40% plus being ahead of the nearest contended by at least 10%. Otherwise the top two presidential candidates have to face off in a second round of voting on April 2.

Polls closed on Sunday night, and by Monday morning nearly 90% of the votes had been tallied. Eight candidates ran, and the leftist Moreno gained a plurality with over a 10% lead compared to his nearest rival, the rightist Lasso. But at 39.12%, the left’s candidate was still a hair’s breadth short of the 40% needed to avoid a runoff election.

Election results will be trickling in from remote regions in Ecuador for a few days. Lenin Moreno may yet squeak by with a first round win. If the process goes to a second round, the fractious right will try to unify around Lasso, while Moreno will rally his base among poor and working communities.

US whistleblower Chelsea Manning is scheduled to be released on May 17th on a commuted 35-year sentence, after spending seven hard years in prison. Assange’s WikiLeaks came into prominence when it released the video Collateral Murder along with over 700,000 documents, obtained from Manning.

If the Pink Tide in Latin America continues to flow rather than ebb, a week after Manning’s release, Lenin Moreno will be inaugurated as Ecuador’s next president. And Julian Assange will remain safely in the embassy.

Roger Harris is the immediate past president of the Task Force on the Americas, a 32-year-old human rights organization supporting the social justice movements in Latin America and the Caribbean from US imperialist intervention. He is on the State Central Committee of the Peace and Freedom Party, the only ballot-qualified socialist party in California.

LOCK UP THE ENGLISH ESTABLISHMENT IN A JAIL OR INSANE ASYLUM!