Home ACTIVISTS & HEROES Gaither Stewart: “We need brave young people to carry the message of real change to the heartland”

Gaither Stewart: “We need brave young people to carry the message of real change to the heartland”

Regarding the path to follow during the current crisis
OpEds

I followed your important discussion on possible courses of action during the current crisis precipitated by the election of Trump, his erratic, unprincipled behaviour, and abominable role played by the so-called “progressives” in the US, with many establishment Democrats (and clueless millions) howling for Trump’s blood from the right (!), for all the wrong or lesser reasons, while baying for war—a war with a major nuclear power which could easily turn to be  curtains for humans and everything else they would drag in their folly to a miserable death. Thus to say this was and has been an essay in idiocy is to fall short of the reality described by such behaviour. Their actions are simply not only omnicidal, they are suicidal in the truest sense of the word. But what are we to do? Decades of constant attacks by the corporate enemy and betrayals of the left idea have extinguished much of its promise, seeding the road for confusion but also perhaps new opportunities.

We need leaders, we need brave young people to crisscross the nation with a message of clarity and action.

I have not witnessed demonstrations in USA since Berkeley in the early 60s. There the orators were everything. I don’t recall signs or flags there. (Cover image above: Mario Savio, head of the “Free Speech” movement at Berkeley, addressing his followers.  Savio had gone to help the civil rights struggle in the South and returned home radicalized. He later popularized the idea of raging against the machine, throwing one’s bodies into the maw if necessary to stop its criminal gears…) 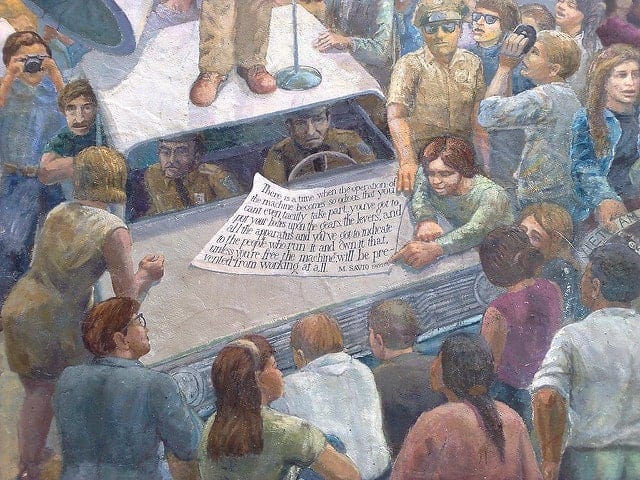 People agitating to stop the machine.

However I have experienced many in Europe, beginning with those in Munich, Rome and Paris in 1967-68, which resulted in the tumult of those years and the creation of the terrorist organizations of the Red Brigades in Italy, Rote Armée Faktion in Germany and Action Directe in France. There were many marches, many signs and many flags.

I have attended demonstrations in Italy over several years. Signs and flags galore. Flags with slogans. But there too the orators were major on the places and squares. Yet one counted on the effect of the signs and flags marching through the streets under people hanging out the windows. The major theme for years was anti-war, anti-Vietnam war.

I like Eric’s Capitalism is cruel. But the anti-war theme seems to me no less effective today. War in Syria. War in Iraq. etc. Choose your war.  Maybe signs with two sides, with both slogans.

Seems to me that the orators still play a major role. I imagine 10 speakers traveling over America, speaking at the demonstrations. A dangerous business to be sure. Speakers on alternative radios, TV, wherever possible. For that you need brave young people. Less armchair stuff. More in the field. A heroic undertaking.

Thanks for all your thoughts on this subject.

Saludos to all the comrades.

EDITOR’S NOTE: No material by this author or any other author published on this site should be read as a defense of Donald Trump and his policies. Trump, the GOP and the Democrats are all part of the same malignant threat to World peace, all life on this planet, democracy, and truth in public affairs afflicting the US and the rest of the world, and emanating from the irrepressible dynamics of global capitalism, protected by the political, media, cultural, and military power of the United States of America.

John Walsh on tactics to rebuild a genuine left alternative

What’s All the Hullaballoo?

Great oratory can move mountains!
But having a clear, decisive, galvanizing message is paramount.
Otherwise you have a lot of wind which just plays havoc with good hair styling.

We need to dream solutions