THIS IS A REPOST } by PAUL LARUDEE

HELP ENLIGHTEN YOUR FELLOWS. BE SURE TO PASS THIS ON.

IF ANYTHING, HUMAN RIGHTS WATCH HAS GOTTEN MORE CYNICAL AND SHAMELESS ABOUT ITS COLLABORATION WITH WASHINGTON'S IMPERIAL PROJECTS. 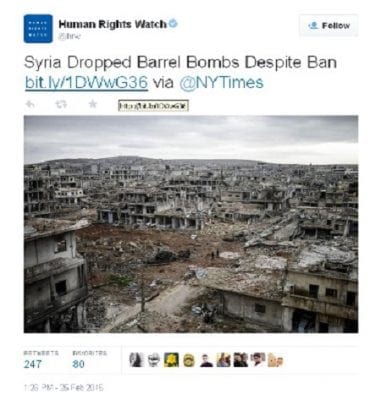 To read Human Rights Watch and the western mainstream media, the Syrian government army is inflicting massive casualties upon the Syrian civilian population, most especially through the use of “barrel bombs”.  Thousands of bombs have been dropped, inflicting thousands of casualties.

Main cover image above: Kenneth Roth, head of Human Rights Watch, Ivy League educated, smooth operator, and totally complicit in the lies and horrid crimes of the empire. The mask of the greatest criminals is often quite respectable.

But wait a minute.  Doesn’t that imply one casualty per bomb?

Credible and reliable facts and figures are notoriously hard to come by, but Human Rights Watch intrepidly goes where angels fear to tread.  They are the only ones that provide both casualty and bomb counts for a given period of time, from February, 2014 through January, 2015.  According to them, more than 1,450 bombs – mostly “barrel” bombs – were dropped on the areas of Daraa and Aleppo covered by the report.  HRW also reports 3,185 civilian casualties from aerial attacks for the same time period and in the same places.  So roughly two casualties per bomb, even if you accept that a lot of “civilians” are actually fighters and that HRW and its sources are hardly unbiased.

That’s a lot of bombs and a lot of casualties, but no indication that “barrel” bombs are more deadly or indiscriminate than the usual gravity bombs in most air force arsenals around the world.  Fighter-bomber aircraft may have sophisticated sighting equipment, but they move at hundreds of miles per hour.  Helicopters that drop “barrel” bombs have the advantage of delivering them from a stationary position. “Barrel” bombs may be crude devices, but there is no evidence that they cause more casualties than conventional gravity bombs. 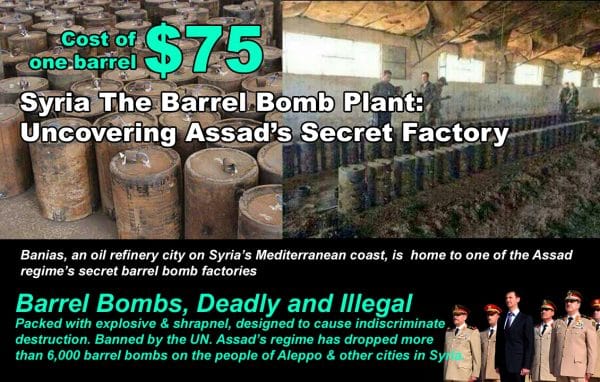 The Western campaign—primarily organized by Washington—to besmirch the name of Syria's president, Bashir al-Assad, has been extensive and unrelenting. Almost all of it has been based on lies. The "barrel bombs" hoax is one of the most enduring. The example above is typical. Other images on this page testify to the same objective: justifying America's assault on Syria counting on the media's complete collaboration and the gullibility of a thoroughly disinformed public.

So what about the huge number of deaths in Syria?  Doesn’t that show reckless disregard for human life by the Syrian army?

The UN estimates 220,000 deaths thus far in the Syrian war.  But almost half are Syrian army soldiers or allied local militia fighters, and two thirds are combatants if we count opposition fighters.  Either way, the ratio of civilian to military casualties is roughly 1:2, given that the opposition is also inflicting civilian casualties.  Compare that to the roughly 3:1 ratio in the US war in Iraq and 4:1 in the Israeli attack on Gaza in 2008-9.  (The rate of Palestinian to Israeli casualties was an astronomical 100:1.)

The Israelis also used Dense Inert Metal Explosive (DIME) munitions that strip the flesh off the bone and cause microscopic metal particles to penetrate the victim’s body.  In addition, they used white phosphorous, which burns hot enough to eat through metal or flesh and is almost impossible to extinguish, even inside the body.  And let’s not forget the four million cluster bombs that Israel spread throughout south Lebanon during the last 72 hours of the 2006 war, knowing that the fighting was ending.  These parting gifts assured that Lebanese farmers and children would be killed or maimed for years to come. 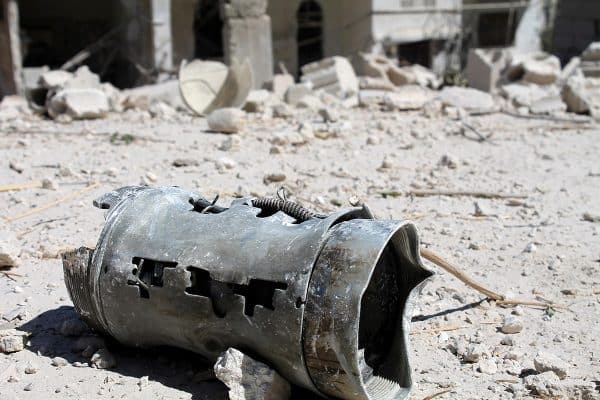 A supposed detonated "barrel bomb" dropped by Assad. Obviously an easily staged propaganda prop. A true bomb of this size would leave nothing intact. What makes us so sure the "bomb" is actually in Syria and not Iraq or Libya? Wreckage like this can be found almost anywhere in the Middle East these, days, as Washington's assault has turned the region into a chaotic pile of bloodstained rubble in most places.

Syria has used none of these disgusting weapons, while being condemned for using locally-made weapons that are in fact no worse than conventional munitions in the arsenals of every air force. Of course, even gravity bombs can create appalling casualties when used on a dense population center.  The point is that such incidents are rare enough to be tabulated and recognized (on Wikipedia, for example).  To the contrary, the Syrian army has been accused of the opposite: laying siege to an area and starving out the residents, and then using “barrel bombs” to clear the remaining armed elements.

In order to vilify the Syrian armed forces it was necessary to frame Syria for the use of sarin gas, a transparent fraud given that the army gained no strategic advantage and that their use had never been recorded or reported prior to U.S. President Obama’s threat to intervene, only afterward.  Really, who would take such a risk for no apparent gain?

The Syrian army relies on loyal soldiers defending their country and their homes from a heavily subsidized, markedly foreign incursion, including many mercenaries paid by the Gulf monarchies and trained by the US.  And the army is loyal because they know that although great sacrifices will be asked of them, they will be defending, not sacrificing, their families and loved ones.  The rest of the world that supposedly cares about Syria can start by making it unnecessary for them to make such sacrifices. 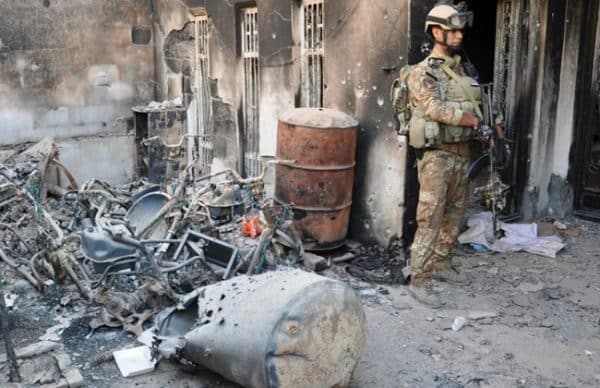 Yes, of course, it's all Assad's fault. And never mind who started this horrid mess. 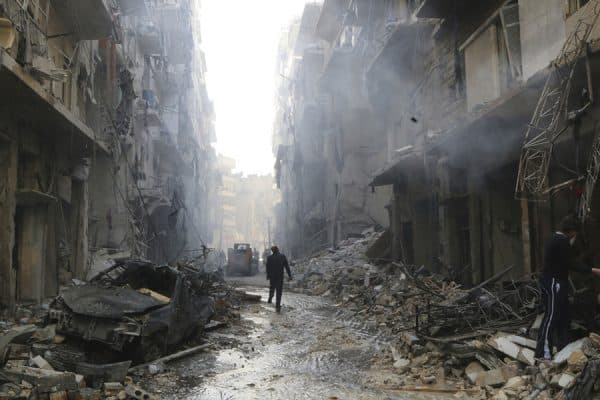 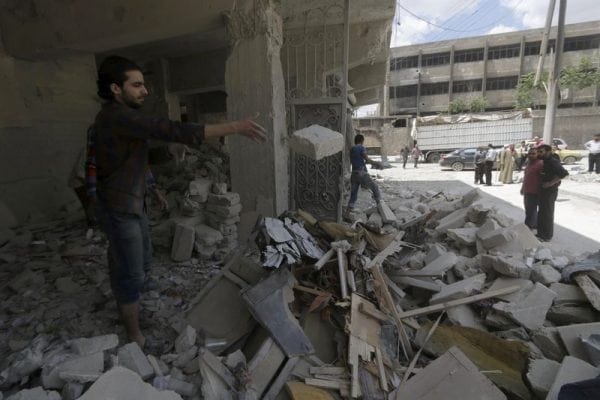 Another image distributed by the British claiming to show more destruction as a result of Assad's ruthless bombing. 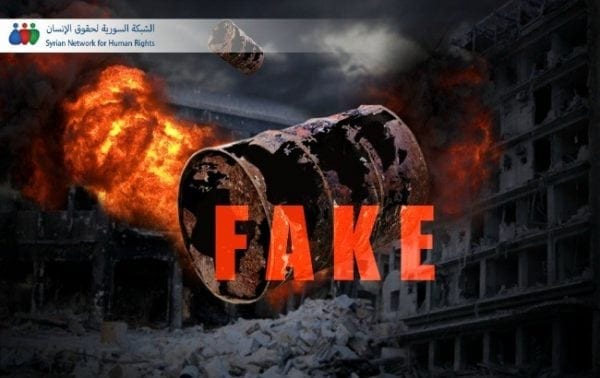 And the simple truth about this ongoing fabrication.

About the Author
Paul Larudee is on the steering committee of the Syria Solidarity Movement.

History and Hypocrisy: Why the Korean War Matters in the Age of Trump

The Pope and I