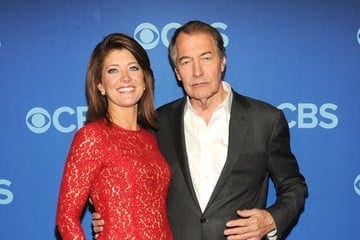 CBS disinformers Norah O'Donnell, and Charlie Rose. The former an ignorant, glorified cheerleader, the latter a veteran courtier and suck-up to the powerful in capitalist society. They are par for the course in what passes for US "professional journalism".

Many of our readers fail to take advantage of our sections (inscribed on our top menu). These comprise: BEIJING DISPATCH,  RUSSIA DESK, WORLD DESK, VIRTUAL UNIVERSITY, ARMAGEDDON, AUTHORS and NATURE. Now we have created a special page dedicated to tracking articles connected chiefly with the battle of communications, which, logically, involves a close examination of what the corporate media do as main ideological guardians of the capitalist faith, the global religion of our time. TGP's sections save time by concentrating material on any of the major topics we discuss on these pages. Their titles are self explanatory and require little elaboration. Obviously the Russia Desk collects articles directly or indirectly binding on matters affecting Russia and her interactions with the rest of the world, especially the re-energized Western campaign to demonize her and ultimately destroy her as a viable nation and world power. Same can be said for Beijing Dispatch, helmed by our correspondent in China, Jeff Brown, who keeps us informed about the doings in that ancient and pivotal civilization. Armageddon focuses on analyses of the looming nuclear confrontation between the superpowers, a war created and most likely to be detonated by Washington in its sociopathic quest for global supremacy.

The top menu sections are complemented with several additional pages: Election 2016, focusing on Trump's upset victory and its disgusting repercussions to date,  and a couple of utilitarian sections, About Us, and Contacts Us, all, again, self-explanatory. These are accessible on the sidebar and footers.

The latest section is somewhat different not only in topic but in its empowering immediacy. THE MEDIA FRONT, hopes to spark interest in a hands on approach to the fight against the global plutocracy where they remain most vulnerable: their ideological defense and legitimation machinery, the corporate media. Our job is to challenge and defeat the enormous and cynical lies disseminated by the gargantuan system of reality manipulation built by capitalism, while also exposing the mass media for what they are, servants of the 0.000001% to the detriment of everyone else.

The Media Front is accessed directly by using the button on the top menu or via its link: https://www.greanvillepost.com/media-front/

For most of its history the US left has neglected or been incapable of developing a robust independent media apparatus of its own.  By "left" I do not mean the centrist liberals, especially Democrats, who have almost somnambulistically co-opted the label "leftist" and have their own viewpoint amply represented throughout the corporate machine as well as supposedly "public venues (NPR, etc.), their ludicrous usage of the word ironically validated by too many ignorant and fanatical rightwingers for whom any form of state intervention is tyranny and both liberaloids and true radicals are dumped in the same shredder reserved for "leftists"

Obviously there are a number of reasons for the left's failure to develop a significant media presence, including the fact that as all politics is rooted in class interest, the richest segments of the population are always better positioned to support political currents, leaders, media assets, and movements that mirror their policy preferences and do their bidding. However, there are also powerful cultural and historical factors multiplying the effects of sheer money.

The deciding action that affected the Viet Nam war was not the internet or any real social media as viewed today. The obstacle to justice and change is us …. like this octogenarian pecking on this touch pad. The “Masters” of the universe are willing, to literally, let us peck ourselves to death. It was people in the streets, common spaces and private spaces that brought change. An occasional flash mob parading around without an agenda or at least a list of demands makes the 24/7 cycle news then ….. dies like an un watered potted plant. We need organizers and street leaders to pursue the ideas as outlined by the Greanville Post and others. A study of the tactics used by olden Union Organizers will be helpful…..It will take courage to face down the police/security state slaves of the 1% and their primary weapon ….FEAR.